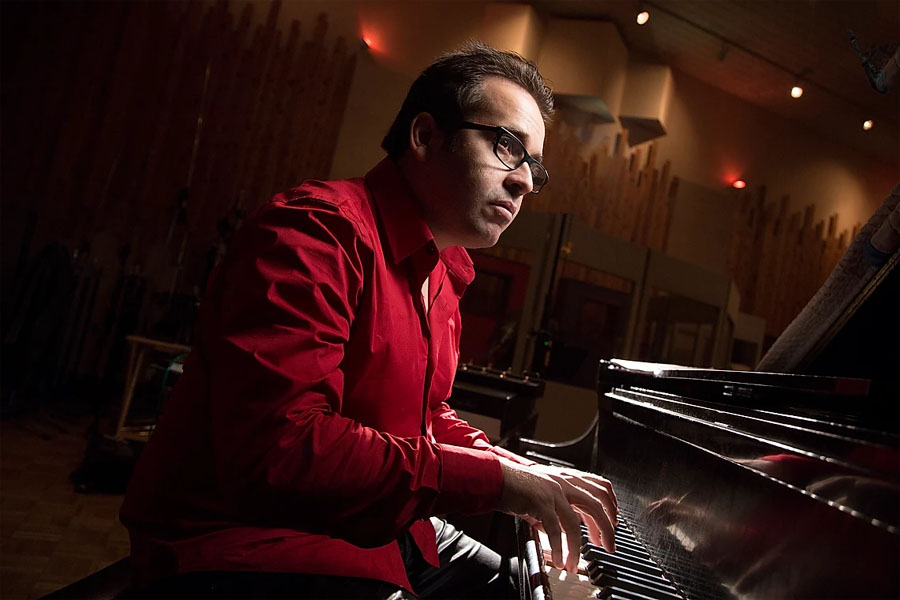 Addressing a range of political and societal issues that are relevant even today, the texts are set for two unique vocalists, Sofia Rei and Camila Meza. Valera uses the broad palette of the big band to express a wide breadth of moods and emotions, touching on traditional Cuban music styles (Danzón, bolero) as well as modern Latin jazz to give Martí’s poetry new life.

The album’s large ensemble features some of New York’s best creative musicians, including standout soloists Michael Rodriguez, Roman Filiu, Joel Frahm, and Mauricio Herrera. Produced by Kabir Sehgal and Doug Davis, the album is modern big band jazz with a message. Born out of the crisis of Valera’s loss of his wife to cancer last year, Jose Marti en Nueva York is a personal cry for freedom, justice, and an expression of passion.

José Martí En Nueva York is a masterpiece. And I don’t use that word lightly. Manuel Valera is a musical genius who has crafted music that is both enlightening and entertaining, sophisticated and subtle. That Valera has been inspired by Cuba’s patron saint, José Martí, has given this work an epic trajectory. How can you pay homage to the patriot who symbolizes Cuban independence? With a musical work that soars in its ambition and pulses with the rhythm of freedom and liberty.

No doubt, Valera prepared for the large task at hand. He conceived and visualized this piece as an honorific of Martí but also as a reflection on the ties between the United States and Cuba. Valera began writing the music for the album as part of the Guggenheim Fellowship. And then the music took on tragic meaning. When Valera lost his wife Lisa to cancer, he threw himself into the process of crafting the music. Writing and playing music has a meditative and cathartic effect on the maestro. “Music kept me together through those very hard months,” said Valera.

Writing for a big band is no easy feat. It’s a challenge that Valera was up for, as he has long studied, enjoyed, and practiced the form. He admires (and channels) Thad Jones, Bob Brookmeyer, Kenny Wheeler, Carlos Franzetti, and more. Manuel Valera and the New Cuban Express is a cast of veritable all-stars with remarkable vocalists such as Camila Meza (Parts 1, 3, 4) and Sofia Rei (Parts 2, 5, 6, 7). The incubator for this music was certainly Terraza 7 in Queens, New York, and it benefitted from the support of its owner Freddy Castiblanco.

What gives this project ballast is Martí’s poems. Valera based this song cycle on a book that Martí wrote during his fifteen year stay in New York as a journalist, as he helped to fund the ongoing struggle for independence in Cuba. The poems address a range of political and societal issues. For example, Verse III Odio La Mascara Y El Vicio is a mediation in which Martí longs to return to his home country. Verse XXVI El Enemigo Brutal inveighs against the cruelness of the colonial Spaniards towards native Cubans. Verse XXXIX Cultivo Una Rosa Blanca, which is arguably the most well-known, is a reflection on amity, accord, and friendship. Setting these seminal words to music was no easy feat, and Valera has delivered a gift to his native Cuba and to all who enjoy freedom and ardently defend it.

José Martí En Nueva York will go down as a release for the ages, one that reharmonized the poetry of patriotism into the music of a maestro. It has been a privilege for Doug Davis and I to produce this work with and for maestro Valera. We’re also grateful to Dave Douglas and Greenleaf Music for putting this project out into the world.- Kabir Sehgal, June 2020

I’ve been a huge fan of big band music since my college days and after moving to New York I got to perform quite a bit with big bands and fell in love with the format!

Earlier last year while talking with Terraza 7 in queens’ owner Freddy Castiblanco about my Guggenheim Fellowship receipt last year, the Idea of having my own working big band came up and he offered to do a monthly residency at his club. With that in place I started the task of writing all the music. At first it was 8 arrangements and then my big band writing addiction and obsession was sparked. I arranged and composed over 30 compositions for the big band last year. As part of that work was the expansion of my 2015 Chamber Music Jazz Works commission Jose Marti en Nueva York for big band. This piece was conceived for the smaller version of this band – The Sextet New Cuban Express – but I’ve always felt that this piece needed to be bigger and larger sounding. The original singer for the project was Sofia Rei (which I love) and last august Camila Meza sang with the Big Band at the Jazz Gallery and I also love her interpretation.

During all this while my wife Lisa Valera was battling a rare form of cancer – this music saved my sanity. The therapeutic effect of composing helped take my mind off of this dire situation even if for a couple of hours of a day. Sadly, she lost her battle with cancer in October. This music is dedicated to her.

I’ve been fortunate enough to have a fairly consistent group of musicians performing with the band! Conceptually I wanted a big band full of improvisers. My idea was that the rhythm section would be very interactive in all aspects and the music should be open enough to allow the rhythm section to be loose or tight as needed. Sort of like the Thad Jones/Mel Lewis rhythm section is pretty loose behind the solos. I definitely wanted a small group approach to big band. I feel that the album Jose Martí en Nueva York greatly reflects this approach! – Manuel Valera, June 2020

2019 Guggenheim Fellow, Grammy nominated Cuban pianist and composer Manuel Valera has been an integral part of the New York jazz scene since his arrival in 2003. Valera has been prolific as a leader of his own groups, sideman on many recordings and most notably as a composer.

As a composer Valera has been awarded several grants for composition most notably Chamber Music America’s New Jazz Works in 2006, 2013, and 2017. Dranoff 2 Piano Barcardi Choice commission 2015 and 2017 and the ASCAP Young Jazz Composer Award. Valera is a prolific composer. Valera has composed close to 400 pieces for different formats and genres since the early 2000s.

As a leader, he has produced 15 recordings ranging from Solo Piano to Big Band. Manuel is also the leader of the New Cuban Express. His sixth record as a leader New Cuban Express was released in June/2012 and is nominated for the 2013 Grammys in the Best Latin Jazz Album category. Valera’s projects specially his Trio can be seen performing at clubs and festivals all over the world. In 2019, he will release two new Cds. Manuel Valera Trio: Live at L’Oson and the much-anticipated New Cuban Express Big Band Recording entitled “Martí en Nueva York featuring the work of Cuba’s most famous Individual Jose Martí. “Marti en Nueva York” is a Chamber Music America commission expanded for the Big Band format