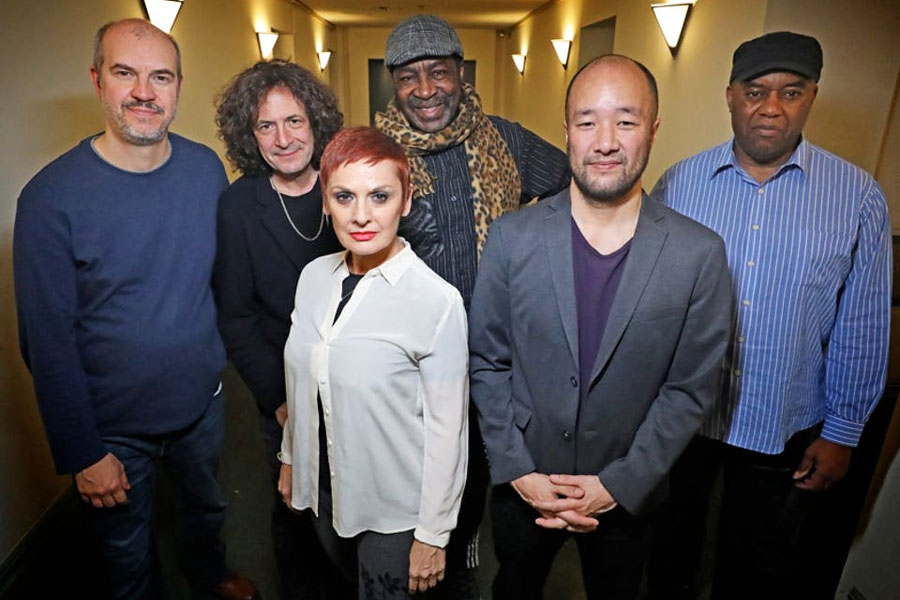 Internationally acclaimed vocalist Mafalda Minnozzi is proud to announce the July 20th release of her new and highly-anticipated album Sensorial – Portraits in Bossa & Jazz.  Under the musical direction of guitarist Paul Ricci and with the help of heavyweights like pianist Art Hirahara, bassists Essiet Okon Essiet and Harvie S, drummer Victor Jones and percussionists Will Calhoun and Rogério Boccato, Sensorial revisits and reimagines the Brazilian songbook, while consciously interlacing the dynamism of New York City in an imaginative blend of Bossa and Jazz. With its track selection inspired by the aesthetics of Gil Evans, João Gilberto and Roberto Murolo, Sensorial not only showcases Mafalda Minnozzi’s unmistakable technique and spirit, but presents a collection of emotionally charged arrangements drawing from her multicultural career in South America, Italy and New York City. Known for her explosively energetic live performances, this recorded project aims to deliver that same fiery appeal – with the accompaniment of live video performances of each track this release succeeds in doing just that.

In particular, “Sensorial – Portraits in Bossa & Jazz“ brings deserved recognition and light to some Brazilian composers less present in the jazz world alongside the ubiquitous compositional prowess of Antonio Carlos Jobim – seven of Jobim’s originally-penned tracks are featured (including his often recorded Dindi, Desafinado and Triste) while the influence of his work with Joao Gilberto is also evident across the album’s remaining six tracks in both arrangement and swing – it’s no surprise that musical director Paul Ricci has lent his talents to the works of singers Astrud and Bebel Gilberto – wife and daughter of João.

From track one’s introductory phrase on Jobim’s “A Felicidade” it is clear that this is not a typical Bossa nova project as the band turns up both the tempo and the heat with the spontaneity and interplay of a jazz quintet and Mafalda is clearly the horn.

Another standout track from the album is “Vivo Sonhando”. This modern interpretation of the Jobim classic makes the most of the lyric’s meaning with a hypnotic beat from Victor Jones and a dreamlike guitar backdrop leaving singer Mafalda Minnozzi and pianist Art Hirahara to improvise and explore the timeless melody with unique colors and jazzy possibilities.

Chico Buarque’s majestic “Morro Dois Irmaos“ captures the composer’s poetry in a mystical ensemble dialogue that melds the jazz element into a song rarely exported beyond the Brazilian border in an arrangement that exploits Mafalda’s gift for exuberant flight in the heat of the final moments.

After listening to the mix of “Samba da Benção”, special guest percussionist Will Calhoun reflected, “that track is magic.” This Baden Powell composition can be regarded as one of the album’s epitomic tracks – it strives to rearrange a classic from Mafalda’s individualistic perspective, to the point of pleasantly surprising those who know – or think they know – the original composition. Here, Mafalda truly makes the most of the mesmerizing African influenced pulse provided by Calhoun’s udu drum to in a musical dance with pianist Art Hirahara.

“Once I Loved” is one of the two tracks on the album sung in English. On this tune, Mafalda’s vocal captures the fragility and innocence of the lyrics and sets the tone for the band’s introspective mood. Essiet Okon Essiet’s atypical funky approach to the bass with Rogério Boccato’s tamborim propels the spirited melodic solos by Art Hirahara and Paul Ricci. Drummer Victor Jones turns up the intensity to prepare Mafalda’s final phrases that further lift the energy to a determined closing statement.

The album changes mood with a Getz/Gilberto classic and perhaps one of Jobim’s most famous tunes, “Chega de Saudade”. Mafalda puts to rest the question if this is a happy or sad song. Although it is about “saudade”, or a great longing and desire to stay at a loved one’s side, this joyful interpretation assures us that a happy ending is in sight. Harvie S steps out for a masterful solo as the interplay and suspense of what will happen next becomes the spark for Mafalda’s creative scat singing that is not only melodic but also percussive.

Sensorial – Portraits in Bossa & Jazz also visits the more visceral sound of the Samba in both an almost “Blue Note” reading of Toninho Horta’s “Mocidade” and in the standout “Jogral” (a track which has been regularly performed by popular composer Djavan) Filó Machado and José Neto’s roller coaster melody is taken to a full out grooving Samba in the masterful hands of percussionist Rogério Boccato while the band pushes the envelope with collective improvisation behind Mafalda’s spirited scatting to a wild ending that liberates the listener from the intensity of the driving beat.

Completing the list of great Brazilian composers, Mafalda includes an Italian version of “Un Altro Addio” by Toquinho/Vinicius de Moraes and “É Preciso Perdoar” by Alcevando Luz/Carlos Coqueijo which is kicked off with John Coltrane’s “Lonnie’s Lament” as both themes seem to be woven from the same soulful fabric of jazz and afro Brazilian colors.

In the words of Mafalda “the process and selection of the songs represent the feelings that flow through me from the energy that Brazilian music creates in both a physical and sensorial manner that goes beyond singing … it’s like a vocal dance involving all the senses, maybe 5 aren’t enough. I’m certain that in the horizons, in the animals and fruits, in the colors and smells that are Brazil, there is a language here, both in me and in these great songs. The great act of liberty for me was to run free through these songs and with the help of these great musicians …I closed my eyes in the studio and saw it all again in a life’s story across cultures.”

Born in Pavia, Italy, Mafalda Minnozzi is a charismatic singer and composer who over her career has melded her vocal virtuosity with jazz in an individual sound that evokes standing ovations from audiences and impresses critics on an ever expanding international level. Her trajectory from clubs and TV in Rome to Rio De Janeiro launched an over 20 year career in Brazil that includes prestigious collaborations with Milton Nascimento, Leny Andrade, André Mehmari, Guinga, Hugo Fattoruso, Filó Machado, Martinho da Vila, Toquinho and so many others. Her resume includes TV shows, 15 CDs, 2 DVDs, film and TV soundtracks as both singer and composer, S. American jazz festivals and shows throughout Brazil in its most prestigious venues. At the same time, she has performed in major Italian jazz festivals often with her “eMPathia Jazz Duo” project with Paul Ricci, and has recently brought her NY band on an Italian jazz festival tour previewing the release of Sensorial, garnering her acclaim in JAZZIT magazine’s top 10 vocalists two years in a row in 2018 and 2019.

In NY, she has been making her name at Birdland, Mezzrow’s and Zinc bar among other venues over these last 3 years. A growing fan base and buzz from NY’s great players have made each of her appearances an event as the scene integrates with and embraces Mafalda Minnozzi’s style.