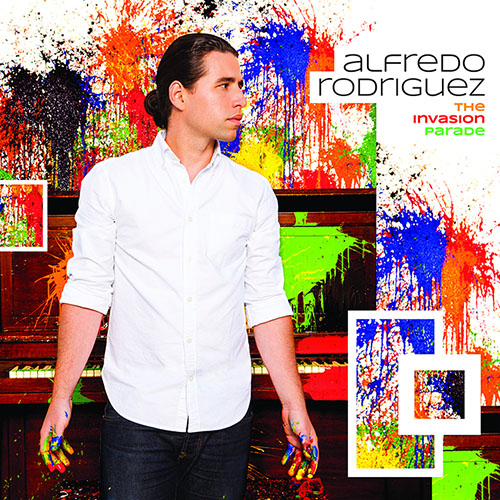 “[Alfredo’s] playing, proficient and soulful, projects a spirited, youthful charm.” – The New York Times
“I have been surrounded by the best musicians in the world my entire life and he is one of the best.” – Quincy Jones
Stream tracks from The Invasion Parade

For those who know how to listen, time and distance offer a wealth of perspective.

“When you live in your own country, you are immersed in that reality and you’re not necessarily conscious of all the different elements that make it what it is,” says Cuban pianist and composer Alfredo Rodríguez, who moved to the United States in January 2009. “I breathed Cuban music. Being outside that reality gives me a different perspective. Creating and playing this music has been like finding out who I am, all over again.”

On The Invasion Parade, the follow-up to his stunning debut on Mack Avenue, Sounds of Space, Rodríguez explores his memories of Cuba, the people and the culture he left behind-and finds his new place.

“I searched different styles, different rhythms of Cuban music,” explains Rodríguez. “I explored Conga Santiaguera [a rhythm from Santiago, in Eastern Cuba], Afro-Cuban music and also música guajira [country music]. I’m exploring the roots and searching for my own contribution to Cuban music.”

Born in Havana, Cuba as the son of a popular singer, television presenter and entertainer of the same name, Rodríguez began his formal music education at seven. Percussion, not piano, was his first choice. “But to choose what I wanted I had to wait until I was 10,” he explains. “So I picked piano. By the time I could actually switch to percussion, I knew the piano was my path.”

He graduated to the Conservatorio Amadeo Roldán, and then to the Instituto Superior de Arte. He had a strictly formal classical musical education, and learned popular styles on stage playing in his father’s orchestra from the age of 14. “I had a chance to perform every day, and write arrangements for all kinds of music: boleros, rock ‘n’ roll, dance music, you name it. That is where I learned the discipline of being a professional musician.”

In 2006, Rodríguez was chosen to play at the Montreux Jazz Festival. While there, he was invited to a gathering at the house of the festival’s founder and director, Claude Nobs, who asked him if he would play for Quincy Jones.

“When I finished, Quincy said he liked it a lot and that he wanted to work with me. That someone I admire so much would be interested in doing something with me was incredible. But I’m a realist, and while it was a nice idea I thought it would be difficult. And it was.”

It took him three years. Finally in 2009, while in Mexico after playing some engagements with his father who lived there at the time, Rodríguez made his move with “nothing: a suitcase with a sweater, a pair of jeans and my music.”

Sounds of Space, his first album on Mack Avenue, was released in 2011.

The title The Invasion Parade refers to an annual tradition, a carnival parade in Santiago de Cuba commemorating the invasion of the Liberation Army that marked the end of Cuba’s War of Independence. In this blocks-long parade “not only comparsas [drumming and dance groups] participate but also all the people of Santiago, they come out and join playing whatever they have-drums, pots, whatever, and singing improvised lyrics,” explains Rodríguez.

The term “invasion” in the title, he’s quick to note, “refers to the invasion of the streets by people who come out to participate and celebrate. In my mind it also has to do with an invasion of culture. I wrote and arranged the music but not everybody in the group is Cuban. We have Cubans but also Americans [such as Esperanza Spalding], a Puerto Rican [Henry Cole], a Bulgarian [bassist Peter Slavov] and it’s a mix of cultures in which everybody contributes.”

The soprano sax in “The Invasion Parade” is featured to evoke the Chinese trumpet, the one melodic instrument in the Santiago conga ensemble. “The idea is to recall that sound without trying to sound traditional-and at the same time express who we are,” he explains.

The sunny “Guantanamera” receives a dissonant, almost unsettling treatment. “My music is very influenced by contemporary music-Messiaen, Stravinsky, Bela Bartok, Prokofiev-and I try to bring my experience and that sound to Cuban music to take it to a different place,” he says. “And obviously, my ‘Guantanamera’ is not about the same Guantanamera that [composer] Joseíto Fernández knew [in the 1920s],” explains Rodríguez. “For me, music comes from life experience. My music reflects the reality I lived in and my experiences, which are very different from his.”

The Latin standard “Quizás, Quizás, Quizás” and the classic “Veinte Años” were set as a change of pace from Rodríguez’ detailed, tightly constructed compositions and arrangements.

“We have performed ‘Quizás…’ many times with the trio so we just went into the studio and played it,” says Rodríguez. “We did the same with ‘Veinte Años.’ We know this music so we just let ourselves go. I think it adds some balance to the record after so much composed music. It adds a looser, more spontaneous feel.”

Rodríguez also explores the music of the Yoruba-rooted, Afro-Cuban religion better known in the U.S. as Santería, from unexpected and often deeply personal angles.

“A Santa Bárbara,” dedicated to the Catholic Saint who has her counterpart in Santería as the deity Changó, is a classic song by Celina y Reutilio, a beloved duo of Cuban guajiro music. “Reutilio died many years ago, but Celina [González] was very close to my family. I even had the chance to play and arrange for Celina, so this a very personal song for me,” says Rodríguez. “Those of us working on improvised music, have been exploring Afro-Cuban music and the country music of Cuba has been ignored, and it’s a beautiful part of our culture.”

“Snails in the Creek” (“Caracoles en el Riachuelo”) is a song for Eleggua, another Santeria deity, and features the singing of Pedrito Martínez, which he improvised in the studio.

“El Güije,” titled after a goblin in Cuban fables, features Spalding on vocals and evokes the quirky, playful melodies of Brazilian composer and multi-instrumentalist Hermeto Pascoal, a Rodríguez favorite. “This is a song that has influences from the Caribbean, South America and other places, but the rhythmic foundation is Cuban and to me it means that yes, we are global, but underneath it all, our roots are Cuban.”

And then in “Timberobot” and “Cubismo,” Rodríguez addresses his interest in and concerns about technology, modernity-but also dancing, and in particular, timba a modern Cuban style.

“Sometimes there’s a gulf between the intellectual elements around music and the dancer’s needs. It happened in jazz and it was very damaging. In my music I don’t want to lose that connection to the dance floor, and that doesn’t happen with music that has a folk essence. You go ask a rumbero [rumba practitioner] in Cuba and for him there is no difference between the singer, the player and the dancer. It’s all one thing. And if you don’t know all the three aspects then for him, you know nothing about it.”

As if to drive the point home, “Cubismo” has a simple, repeated refrain: “Dancing Cubism.” “It’s a celebration of timba-but a Picasso timba, a Juan Gris timba,” he offers with a laugh. “It’s an abstract timba. You are dancing timba and looking at ‘Les Demoiselles d’Avignon’.

“The invasion of The Invasion Parade is a peaceful one, and an honest one,” he says. “It’s a celebration to which all are invited, exactly like in the conga Santiaguera. That’s the message we want to send out.”