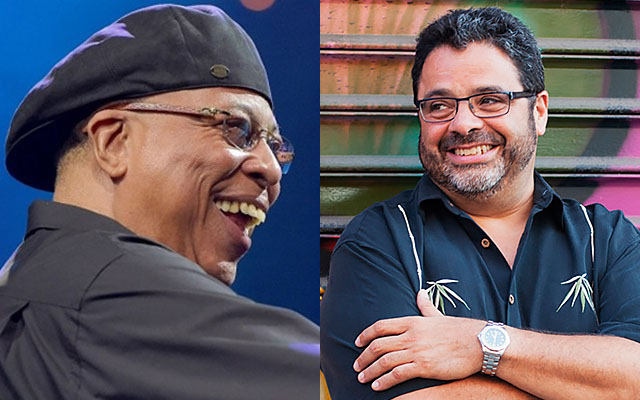 An Historic Concert Featuring Chucho Valdés and Arturo O’Farrill Performing New Works and Classics By Their Legendary Fathers Bebo Valdés and Chico O’Farrill, All Together on Stage with their Acclaimed Children: Adam and Zack O’Farrill, Leyanis and Jesse Valdés

Legacies of Jazz: Bebo, Chico, Chucho, ‘Turo opens a new dialogue between Cuba and the United States, one that echoes O’Farrill’s commitment to connection, proving that revolution will not hinder family ties. O’Farrill and Valdés are living proof that culture is more important than politics and ideology, and that love and art are the highest power. O’Farrill has been on the frontlines for more than a decade fighting for normalization between the U.S. and Cuba. A modern day “jazz ambassador,” his latest GRAMMY® and Latin GRAMMY® award-winning album Cuba: The Conversation Continues was recorded at Abdala Studios in Havana just days following Obama’s unexpected announcement of the restoration of full diplomatic relations between the two nations.

On December 10, in Havana, O’Farrill leads an official ceremony honoring Chico’s legacy and his long awaited return to Cuba at the Basílica of San Francisco de Asís. What appeared to be impossible until relations were restored between the United States and Cuba, O’Farrill fulfills his father’s greatest dream of returning to his birthplace. A sojourn deeply connecting a son and father, the arrival of Chico to his ancestral land comes nearly 70 years after his departure from Cuba.

Following the live concert Legacies of Jazz: Bebo, Chico, Chucho, ‘Turo, O’Farrill and Valdés will record a new full-length studio album showcasing collaborative new works composed by the pianists. The album will be recorded at Avatar Studios in New York City, and will be released in 2017.

ALJA will present various special events in connection with the Symphony Space concert and recording project from mid-January – February 5, 2017. ALJA and the Artists would like to thank Steinway & Sons for their sponsorship of both the Legacies of Jazz concert and recording project by providing Steinway pianos. For more details, visit ALJA’s website: www.afrolatinjazz.org