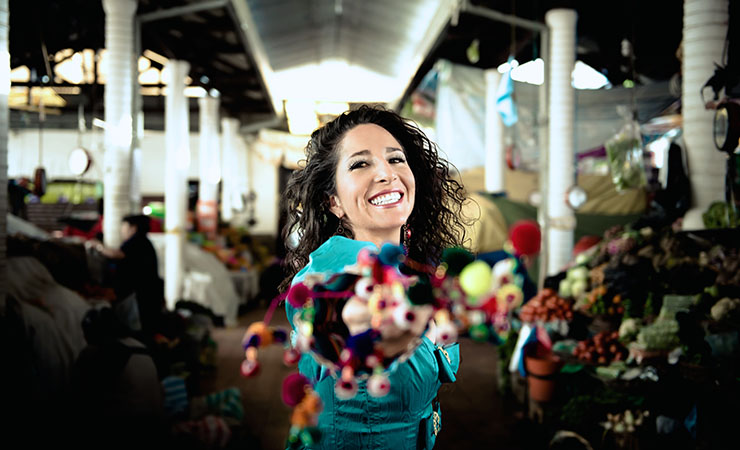 Any true fusion in music represents a delicate negotiation. It requires both respect for the different genres in play, their traditions and codes and a ‘why not?’ attitude.  Cutting-and-pasting is one thing, translating the approach, technique and sensibility of one tradition to another demands a special talent and commitment.

Throughout the recording, she sings in English, Spanish, Italian and Quechua. Co-produced by Tisera and Grammy-nominated Cuban pianist Elio Villafranca, Nora La Bella includes original songs, provocative versions of two works from the classical vocal repertoire and several pieces from the Latin American songbook, including a couple from the socially committed Nueva Canción.

But this is not a lab project. Rather, it’s an expression of her experience and her personal search. 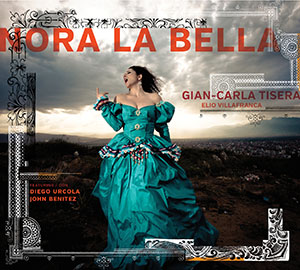 “I had this idea for a new kind of opera, something different, accessible and fresh,” says Tisera. “I love opera and that’s my training, and while I am not a jazz singer or a traditional folk singer, both genres have been an integral part of my life and my musical experience. And I also thought: how can I express my immigrant experience? How can I speak of my perspective as a Bolivian woman, as an American woman looking back at my country from a distance? All of that came into play when working on Nora La Bella.”

Accompanied by a quartet featuring Villafranca at the piano and guest artists such as trumpeter Diego Urcola and five-time Grammy Award-winning bassist John Benitez, Tisera’s music includes nods to Bolivian folklore (her original “Señora Chichera” and “Cueca Lejanía”) and her own versions of the aria “Tu che le vanita” from Giuseppe Verdi’s Don Carlo, appearing here as the source for “Ernesto in the tomb,” and the madrigal “Amarilli” from Giulio Caccini’s Le Nuove Musiche.

She offers a very personal take, often celebrating at once vanguard and tradition, of the folk song “La Llorona” and folk based pieces such as “Alfonsina y El Mar” and “Mujer, Niña y Amiga.”

As for her social and political ideals, Tisera draws her lines in broad strokes with her classically-tinged re-interpretations of the Chilean folk group Quilapayún’s “The people united,” and Carlos Puebla’s “Hasta Siempre,” an ode to Che Guevara and his revolutionary principles that Tisera personalizes with a musical quote inspired by Puccini.

“These songs carry deep social messages, and I chose them for how they inspired broken societies and gave hope to generations with powerful ideals of love and unity,” she says. “They transcend time, culture and race and through them I express my artistic and political thoughts using my classical voice. Also, these choices help me challenge the perceptions that separate artists, especially classically trained artists, from their communities and from the music that speaks to the modern world.”

Born to a Bolivian mother and Italo-Argentine father, Tisera was raised in Cochabamba, a city surrounded by mountains located in the center of Bolivia. She studied at the Instituto Eduardo Laredo, in Cochabamba, and later moved to Los Angeles, CA, where she completed her Masters Degree in Opera Performance at the University of Southern California.

“I moved to New York in 2008, and I arrived here as an opera singer and with the dream of being an opera singer. That was it,” she says. “I’ve loved Latin American folk music all my life, I’ve been intrigued and inspired by jazz and I’m very socially conscious. But as a musician, my choice had always been opera and the classical stage. That was my posture for my first three years in New York and, frankly, I started to feel empty. In the opera world it’s very hard to have your own project and your own ideas. There is a repertoire, you are a performer, and that’s that.”

She worked in the United States and Bolivia, performing with the Los Angeles Philharmonic, the National Symphony Orchestra of Bolivia and the Pasadena Symphony, among others, and for five years she toured with the Bolivian Baroque Project, performing 17th century music found in the Jesuit missions of the Bolivian jungle – a project that showcased her voice on the world’s greatest concert halls. But once in New York, she also started collaborating with visual artists and dipping her toes in the murky waters of jam sessions. “Of course, many looked at me like an odd duck and I would tell them: ‘Yes, I am an opera singer. No, I don’t know jazz standards, but I do know Latin American music, I sing boleros and I can improvise so, why not?’ And that’s how I met Elio.”

Fittingly, their first musical encounter was in the baroque style – the improvisatory nature of baroque being an area of contact between jazz and classical music.

As Tisera began working on the recording she chose pieces based on how they affected her vocally and for the possibilities they offered for reinvention. “I tried many, many songs and ideas. It took me a year of trial and error, to polish the arrangements, create new pieces and let them grow,” she says.

For those who see her approach as avant-garde, Tisera says she is “pushing the vanguard but to bring audiences to experience the greatness of opera as it relates to modern themes of love, politics and culture. I long to present opera not like an old, precious form but instead, as a vibrant, contemporary style that speaks to our concerns now. That’s why there are operatic moments in Nora La Bella – but they might include improvisation, or the musical treatment might include Bolivian or Afro-Latin rhythms, and elements of Rock or Spoken Word. I remember during the recording we were listening to the second take of ‘Ernesto in the Tomb,’ with its Afro-Cuban groove and my operatic voice soaring above the music. The musicians heard it and said ‘Wow, it works!’ and I had to laugh. ‘Yes guys, of course it works’.”

Previous articleArturo O’Farrill & The Afro Latin Jazz Orchestra: The Offense of the Drum
Next articleRitual Beating of the Drum: The Music of Michele Rosewoman, Francisco Mora Catlett and Yosvany Terry