Frank Colón’s Infectious Originals Team His Percussion With A Variety Of Top Brazilian Instrumentalists Who Share The Lead On Trumpet, Flute, Keyboards, Guitars, Accordion And Harmonica

Throughout his career, Frank Colón has been greatly in-demand as a percussionist with popular artists that include Manhattan Transfer, Aretha Franklin, and Tania Maria. But while his percussion is a prominent part of the ensembles of “Latin Lounge”, it is his writing and use of the varied colors from the other musicians that make this a particularly notable recording.

His ten originals are filled with rich melodies, picturesque moods, and infectious Latin grooves. The song titles often define the music, such as the exotic “Emerald Coast,” the optimistic grooves of “Easy Does It,” and “Summer Cocktail”, and the sultry “Let’s Just Go…”, with it’s particularly catchy bass pattern. Jamie Glaser’s acoustic guitar on the funky “Wishful Thinking”, the use of accordion on “Tango Lucumí”, and Roman Miroshnichenko’s Flamenco guitar on “Spanish Heart,” memorably add to the variety of this atmospheric set. 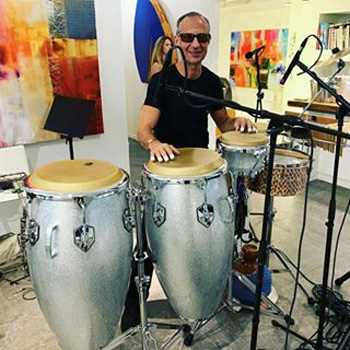 “Latin Lounge” is filled with music that is difficult to resist. As Frank Colón accurately says, “Latin Lounge will move your body, touch your heart, and soothe your soul.The blend of musical cultures raises consciousness, brings people together, and promotes peace. ‘Latin Lounge’ transports the listener to a land they’ve always imagined, but never knew existed.”