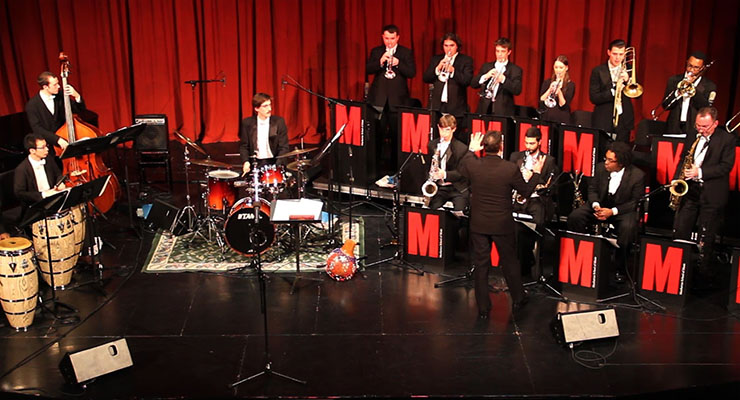 On the heels of his 2013 critically acclaimed double Grammy-nominated CD, MULTIVERSE, BOBBY SANABRIA returns with yet another powerhouse big band CD. This new release features his amazing student musicians who make up the MANHATTAN SCHOOL OF MUSIC AFRO-CUBAN JAZZ ORCHESTRA.

A CELEBRATION OF THE BIRTHPLACE OF AFRO-CUBAN/LATIN JAZZ! 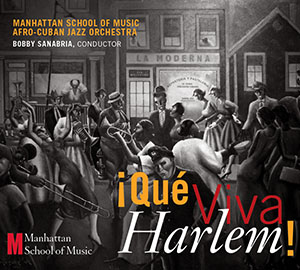 LIVE RECORDING… This CD was recorded live in concert to a standing room only crowd at the school’s acoustically perfect Borden auditorium on March 28, 2013 and mixed by Jim Gately, as well as mastered by the legendary Mark Wilder
from Columbia Records for amazing sonic clarity. This homage to Harlem, the birthplace of Afro-Cuban/Latin Jazz, features explosive treatments of pieces associated with Machito & The Afro-Cubans, Duke Ellington, Clarence and Spencer Williams, Billy Strayhorn and the world premiere of two multi-movement mega pieces by Eugene Marlow and Kyle Athayde.

BACKGROUND… In 1939 on 110th Street and 5th Avenue a Jewish owned catering hall/ballroom, The Park Palace featured Latin music. Standing at the crossroads of Black Harlem (in the west) and Spanish Harlem (in the east), it became the focal point of NYC’s Latin music scene. It was here that Cuban born vocalist Frank “Machito Grillo and his brother-in-law, musical director and multi-instrumentalist Mario Bauzá formed the first band to combine the harmonic sophistication of jazz arranging technique, the virtuosity of the jazz soloist, and the power, intensity and rhythmic excitement of authentic Afro-Cuban rhythms. The Machito Afro-Cubans became the first band to create what today is known as Afro-Cuban/Latin Jazz.

THE MUSIC… Opening with MAMBO INFIERNO and FEEDING THE CHICKENS, the power of Cuban mambo and son montuno fused with jazz arranging technique that were the hallmarks of musical director Mario Bauzá’s vision are immediately on display in full force. Maestro Sanabria indeed has a direct musical-historical connection to this visionary founder of the Afro-Cuban jazz movement as he was the drummer for Mario’s own multi- Grammy nominated Afro-Cuban Jazz Orchestra for nine years and featured prominently on three CD’s he recorded with the orchestra.

Duke Ellington’s OCLUPACA and Clarence and Spencer Williams ROYAL GARDEN BLUES display the majesty of the blues, framed by the rhythms of Afro-son and cha-cha-cha, while effortlessly switching to swing and back, while Billy Strayhorn’s BLOOD COUNT gets a haunting bolero treatment featuring undergrad and rising saxophone star Patrick Bartley on alto.

Eugene Marlow’s multi-movement LET THEIR BE SWING, which alternates between hard core swing culminating with Puerto Rican bomba xica and mambo is a multi-movement tour-de-force ode to Harlem’s Savoy Ballroom. It features the jaw dropping improv skills of lead alto, soprano saxophonist Patrick Bartley and baritone saxophonist Leo Pellegrino who drive the crowd into a frenzy. It concludes with an explosive display of percussion power featuring Matthew Gonzalez on bongó and conductor Sanabria on timbales, who was voted Percussionist of the Year in 2013 by the Jazz Journalists Association.

The critically acclaimed Marlow is no stranger to the art of the big band. He has previously composed and arranged large scale pieces for Maestro Sanabria’s own big band like, EL ACHÉ DE SANABRIA, featured on the Grammy nominated BIG BAND URBAN FOLKTALES and, BROKEN HEARTED, for Bobby’s recent MULTIVERSE CD. His arrangement of ME ACUERDO DE TI is featured on a MSM ACJO’s previous CD, TITO PUENTE MASTERWORKS LIVE!!!

Current MSM grad student Kyle Athayde’s multi-movement mega opus, ¡QUE VIVA HARLEM! SUITE, displays the virtuosity, passion, and intensity of the entire orchestra. It is a virtual musical kaleidoscope of both Black and Spanish Harlem as it goes through tempo and meter changes as well as rhythms like bembé, mambo, swing, bolero, afro-son, cha-cha-cha, Puerto Rican yubá, and Cuban guaguancó displaying Harlem’s vibrancy paying tribute to Harlem’s Apollo Theater, and the Park Palace Ballroom on E. 110th Street and 5th Avenue. It is also an ode to Harlem’s titans of mambo with jazz, Machito, Tito Puente and Tito Rodriguez, as well as their biggest champion, Dizzy Gillespie, the music’s most sophisticated composer and arranger, Chico O’Farrill and Harlem’s most famous resident, Duke Ellington.

ABOUT THE MSM AFRO-CUBAN JAZZ ORCHESTRA Mark Ruffin of Sirius Jazz radio describes the MSM ACJO as “…a group of professionals masquerading as students…” and Audiophile Audition has written, “The Manhattan School of Music Afro-Cuban Jazz Orchestra is unrecognizable as a student ensemble compared to a professional orchestra… the soloists are of such high level…” Directed since its creation in 1999 by 7x Grammy nominee and MSM faculty member Bobby Sanabria, this critically acclaimed student orchestra has the unique distinction of having been nominated for two Latin Grammy’s – KENYA REVISITED LIVE!!! (2008) featuring NEA Jazz master Candido, and TITO PUENTE MASTERWORKS LIVE!!! (2011) on the Jazzheads label. The MSM ACJO is dedicated to performing the music of the majestic “tradición” of the Latin jazz continuum while pushing the genre forward premiering new works. Forging a unique partnership with one of the world’s leading independent jazz labels, Jazzheads, a majority of the revenues of the sale of each CD goes directly to the MSM Scholarship Fund. Thus Jazzheads is not only preserving, propagating and supporting America’s greatest art form but also its next generation of stars.