Dafnison Music To Release Dafnis Prieto Big Band’s Debut Album, Back To The Sunset, April 6, 2018, At The Label’s 10th Anniversary

One of the leading musical voices of his generation, Prieto composed and arranged nine works for the album, showcasing his talents as a trailblazing composer while honoring his musical heroes and mentors including Eddie Palmieri, Chico O’Farrill, Bebo Valdés, Jane Bunnett, and Michel Camilo (in addition to Threadgill, Coleman, and Lynch, among others). Back to the Sunset is Prieto’s seventh recording as a leader, and is a deeply personal, handcrafted statement, as well as an acknowledgment of the musical figures that shaped his development. 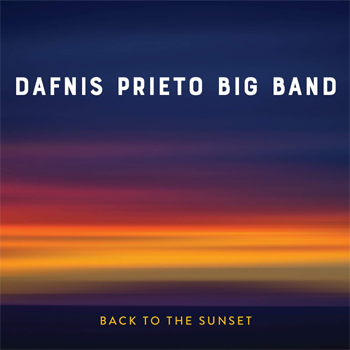 Prieto writes, “The undercurrent of this album is to pay tribute to some significant mentors/musicians that have influenced and inspired me one way or another, directly or indirectly. This is a journey in time, looking back and remembering the way up to now, with gratitude and joy. Back to the Sunset is a state of mind, a place for contemplation and love.”

“It’s been a joy to collaborate with Dafnis Prieto on this ambitious project,” writes Oberstein. “This new ensemble is a powerful vehicle for Dafnis’ expansive ideas as a composer. In this record you’ll hear his native Cuba and the influences he’s absorbed since immigrating to the United States 18 years ago, but also a collection of works that are distinctly his own, with a full palette of sounds and colors on display.”

Since arriving in the U.S. from Cuba in 1999, Prieto has been fearless in his vision, playing and writing across styles, always with a forward-looking instinct. He is known for his inventive, sensitive drumming and propulsive rhythm. His compositions mix lush and jubilant melodies with polyrhythm, displaying a range of musical vocabularies from Latin jazz to classical chamber music. In over two decades as a professional musician, Prieto has composed for numerous configurations, including big band, amassing a catalog of more than 50 original works.

Prieto is committed to maintaining a bold vision for his music. The 17-piece DPBB showcases some of the world’s best Latin jazz musicians, many of whom have previously played Prieto’s music in his other bands. The ensemble features three horn sections (saxophones, trumpets, and trombones) and a rhythm section of piano, bass, congas, and Prieto on drums. The DPBB strives to make an impact as a leading Latin jazz big band recording and performing for years to come, and to provide a platform for Prieto to write for big band, a format he fell in love with as a child.

The DPBB will tour nationally and internationally following the album release in 2018, with booking by Hans Wendl Produktion (artists@hanswendl.com, 510.848.3864).

All compositions & arrangements by Dafnis Prieto

2. The Sooner the Better (9:04). Dedicated to Egberto Gismonti & Jerry González.

For More Information on the Big Band Visit: http://dafnisprietobigband.com

For All Press Matters Contact:
Chris DiGirolamo at Two for the Show Media
Chris@Twofortheshowmedia.com