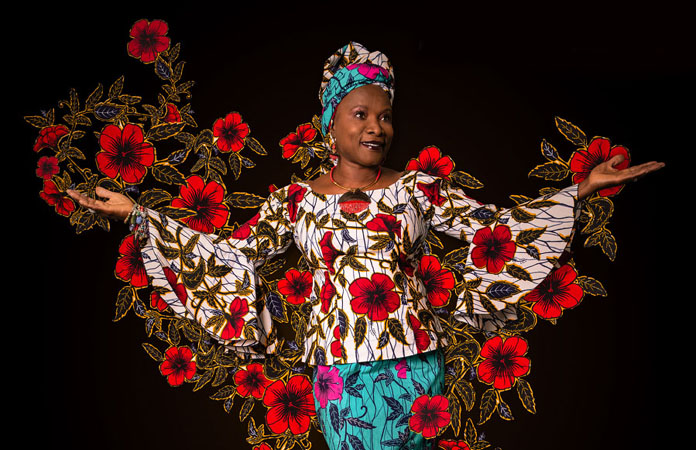 On April 19, 2019, Angélique Kidjo released Celia (Verve/Universal Music France), an album that honors Celia Cruz, widely known as “the Queen of Salsa” and the most popular Latin artist of the 20th century. On Celia, Angélique explores the African roots of the Cuban-born Cruz and reimagines selections from Cruz’s extraordinary career in surprising new ways, infused with an explosion of sounds and rhythms from Cuba, Africa, the Middle East, America and beyond. The album includes performances by Tony Allen (Fela Kuti) on drums, Meshell Ndegeocello on bass, and British saxophonist Shabaka Hutchins plus his band Sons of Kemet.

Angelique Kidjo reflects on an icon of the Americas, celebrated salsa singer Celia Cruz. Over ten tracks, Kidjo’s album Celia divests itself of the glamour to investigate the African roots of the Cuban-born woman who became the “Queen” of salsa, a music genre invented in New York by Caribbean immigrants.

Born in Havana in 1925, Celia Cruz, a black woman, left Cuba with her first group La Sonora Matancera in 1959, when Fidel Castro toppled the dictator Fulgencio Batista from power. Celia Cruz, known for her aversion to the Castro regime, would join Tito Puente’s orchestra in 1966, and her recordings for the Fania label helped to construct the legacy of salsa, the American “melting pot” in which Spanish-speaking immigrants borrowed from the intricacies of Afro-American jazz and vice versa.

Angélique Kidjo lived through the Cuban tidal wave while still in her native Benin, West Africa. Cuban music — beginning with the rumba, the son and the cha cha cha — had been nurtured in voyages back and forth between the shores of the Atlantic.

The music had boarded the same boats as slaves, returning from the Americas on merchant ships to establish itself in the sixties, thanks to exchanges that took place between West African post-colonial governments and their Cuban comrades. The Congo’s rumba took flight, and the salsa permeated the orchestras of West Africa.

“As a child I saw Celia Cruz singing in Benin and her energy and joy changed my life. It was the first I was seeing a powerful woman performer on a stage. Her voice was percussive and her songs resonated in a mysterious way with me. Many years later, I learned she was singing the Yoruba songs that were carried out of Benin 400 years before.”

When the young Angélique Kidjo went to see Celia Cruz sing with Johnny Pacheco at a concert in Cotonou, she had the feeling she was on familiar ground. Many years later her path crossed Queen Celia in a Parisian theatre where she was singing Quimbara, a song composed in 1974 by Junior Cepeda from Puerto Rico. Angélique could hear African percussion in the voice of Celia Cruz. She recognized the structure of the drums played by the Yoruba people, and she could hear the names of Chango or Yémanja, divinities that were common to the sphere of voodoo – Benin, Nigeria, Brazil, Haiti, and Cuba, where the Marxist regime hadn’t succeeded in killing the santeria religion.

“I felt she was a long lost sister from the other side of the world. Like me, she experienced exile from a dictatorship and she was always proud of her roots, of her African roots. In the same way I wanted to bring back Rock and Roll to Africa with my Talking Heads’ Remain In Light project, I now want to pay homage to this incredible voice and those songs that reunite with their juju and Afrobeat roots.”