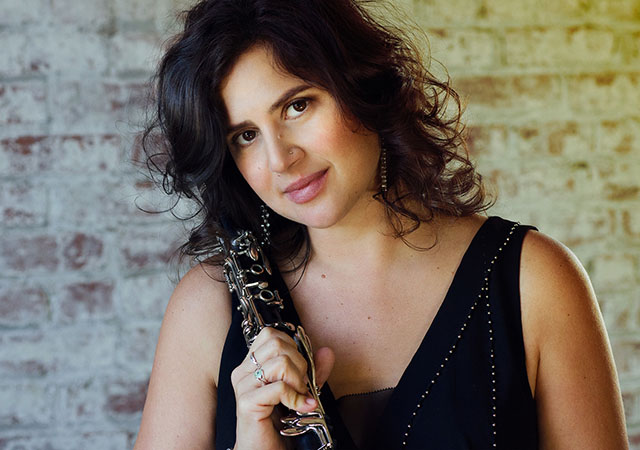 Anat’s seventh album as a leader – to be released by Anzic Records on March 17, 2015 – sees the globe-trotting jazz star range from beautiful originals to Brazilian classics and beyond.

“The lyric beauty of her tone, the easy fluidity of her technique and the extroverted manner of her delivery make this music accessible to all.” — Chicago Tribune 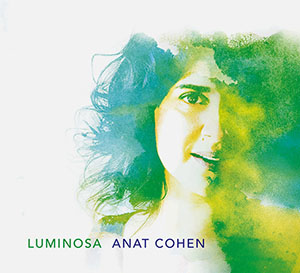 Onstage or on record, the music of Anat Cohen positively glows – with virtuosity, with charisma, with the sheer joy of creation – and never more brightly than on her seventh album as a bandleader, Luminosa. To be released by Anzic Records on March 17, 2015, Luminosa sees the clarinetist-saxophonist play singing, dancing originals, interpret Brazilian classics by the likes of Milton Nascimento, and even re-imagine electronica as acoustica with an ingenious arrangement of a Flying Lotus tune. Members from Anat’s touring quartet – keyboardist Jason Lindner, bassist Joe Martin and drummer Daniel Freedman – appear on the album, as do guest guitarists Romero Lubambo and Gilad Hekselman, percussionist Gilmar Gomes and the Brazilian players of her new band Choro Aventuroso. Anat – born and raised into a musical family in Tel Aviv, Israel, and a resident of New York City since 1999 – has been named the top clarinetist in both the readers and critics polls in DownBeat, the jazz bible, for multiple years running. And her fluency in the jazz tradition is utterly at one with her flair for Brazilian music. As the Brazilian Press has declared: “Anat is an Israeli who seems like a Brazilian when she plays samba.” A true citizen of the world, Anat speaks a universal language through her horn.

About the album, Anat says: “The sound of Luminosa reflects my musical life in New York City. I flow between modern and traditional jazz, between samba and choro – all maybe in a week’s time.” She recorded the album at Avatar Studios in Manhattan, producing the album with Lindner and Oded Lev-Ari (her longtime friend and label partner, who arranged and produced her acclaimed 2007 album Noir for the Anzic Orchestra). Oded says: “The goal in the studio was to create an atmosphere where it was like a session in Anat’s living room, with people dropping by – her quartet is there, some choro guys show up, Romero comes by to play guitar, Jason brings in an electronica tune. It was like a party where everyone felt free to interact, have fun and create.”

Luminosa kicks off with “Lilia,” the first of the album’s three songs associated with Brazilian icon Milton Nascimento. In 2013, Anat led her quartet in a full evening of Nascimento at Columbia University’s Miller Theatre, including his compositions “Lilia” and “Cais” and his interpretation of Edu Lobo’s “Beatriz,” all on Luminosa. “I first heard Nascimento’s Clube da Esquina album in the ’90s when I was at school in Boston – just the sound of his voice drew me in,” she says. “I adore the expressiveness of his singing, and his songs are like short stories. He’s from Minas Gerais, where they have a sound that’s distinct from Rio or Bahia, less traditional – the harmonies go to different, unexpected places. I play ‘Cais’ and ‘Beatriz’ on bass clarinet, which mirrors his vocal range. ”

With her original “In the Spirit of Baden,” Anat pays tribute to another Brazilian musical hero: guitarist-composer Baden Powell. “Every year, the Choro Club in Brasilia pays homage to a different composer, and last year when I played there, it was Baden Powell,” she explains. “His music is very melodic and danceable, so I wrote something in that spirit.” Guitarist Romero Lubambo, from Rio de Janeiro, is a key guest on this track and several others, including his own Bach-meets-baião piece “Bachiao.”

Choro – the irrepressible urban popular music style born in Brazil – has long been a passion of Anat’s, with the genre inspiring her return to the clarinet as a student after years of focusing on saxophone. She recorded the 2007 album Nosso Tempo for Anzic as a key member of the Choro Ensemble, and she has headlined shows in New York with the Choro Ensemble and her new band Choro Aventuroso, with Vitor Gonçalves (accordion), Cesar Garabini (seven-string guitar) and Sergio Krakowski (Pandeiro). Teamed with those players on Luminosa, she interprets K-Ximbinho’s “Ternura” (“Tenderness”) and Severino Araujo’s “Espinha de Bacalhau” (“Spine of the Codfish”), pieces by two top clarinetists.

“Choro is fabulous music,” Anat enthuses. “Like early jazz, it often features the clarinet. It’s very challenging for the player – choro players are masters of their instruments. Choro means ‘cry,’ and the interpretation and personalization of melodies is the point, as in jazz. Expressing the soul of a melody is the holy grail in choro. There’s also a constant conversation in choro groups, an ensemble polyphony that’s complex. But there should also be a lightness to it, a feel-good grooviness. That’s a challenge and thrill to achieve. Whether it’s choro or samba, Brazilian music makes me feel alive and full of emotions. In this day and age, jazz can sometimes feel like it belongs to the musicians. But when I first went to Brazil, I immediately felt that music there belonged to the people. I like that.”

The album’s left-of-center inclusion is its reimagining of “Putty Boy Strut,” the catchy number by electronica innovator Flying Lotus. “Jason brought that tune in – he’s always introducing me to new sounds,” Anat explains. “The original was just so non-acoustic that at first it was, like, ‘What do we do with this?’ But there’s something not only grooving about it, but also kind of humorous. It was really fun to imitate electronic music with acoustic instruments instead of the other way around, as it usually is. Jason is so good at translating grooves and sounds that now it feels like it was written for us.”

Another of Anat’s originals on Luminosa is the pensive ballad “Ima” (“mother” in Hebrew). “I’ve lived so much of my life now away from home,” she says. “I was thinking of my mom when I wrote this piece, missing her.” The emotional flipside is her infectious “Happy Song.” Anat explains: “When I write, I tend toward minor-key themes, so I challenged myself to compose something upbeat, with major chords. And I’m happy with it!” The album’s closing original and jazziest number is “The Wein Machine,” featuring Anat on tenor sax (as well as up-and-coming Israeli guitarist Gilad Hekselman). It’s a tribute to George Wein, indefatigable impresario of the Newport Jazz Festival. Anat was first invited by Wein to play the Newport Jazz Festival in 2007; last year, she was music director of the Newport Jazz Festival Now 60! all-star band that toured the U.S. for the festival’s 60th anniversary. “The tune’s title comes from the sign that’s on the golf cart George drives around the festival grounds,” she explains. “He’s 89, but never stops – he loves jazz and keeps opening the door for young artists, searching for honesty in the music. He’s inspirational.”

Oded Lev-Ari, who has known Anat since they were at school in Tel Aviv together, sees Luminosa as a key album in her evolution. “Anat has always been a versatile musician, able to bounce between multiple aesthetics. Her familiarity with the styles she plays goes deep, though – she doesn’t only play Brazilian music, for instance, she also speaks Portuguese. So whether it’s choro or traditional jazz, her relationship with the art is cultural, with reverence for the history of the music. These various styles have often been a bit segregated in terms of Anat’s recorded output, but this album is different. This is not Anat’s ‘Brazilian Album.’ To me, it is Anat’s ‘Anat Album.’ Beyond being an extraordinary instrumentalist, she is able to communicate pure emotion to the listener. That’s what is front and center on this album.”

For her part, Anat sums up the album this way: “The title Luminosa is Portuguese for luminous – something shining, especially in the dark. To me, music is a luminous experience. Whenever I’m immersed in it, life lights up for me, no matter what else is going on. Whether it’s performing a concert with my quartet or sitting in with my peers, enjoying musical conversations at home with my brothers or hanging and playing choro with my friends – sharing moments in that bright space of music are the happiest times.”