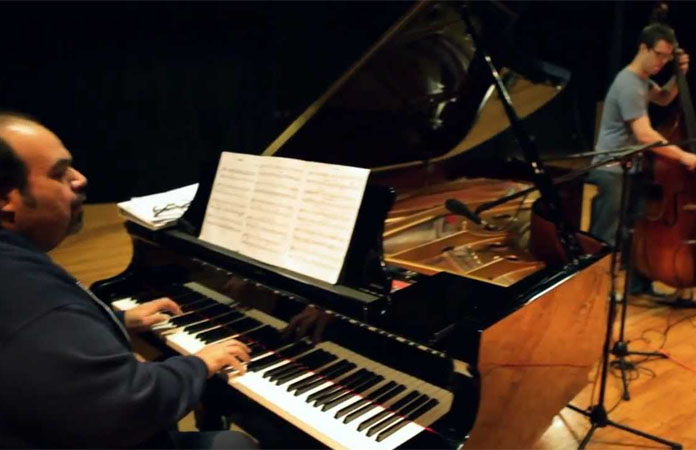 The latest release, On The Way, from Negroni’s Trio, the distinctive unit featuring the father/son team of multitalented Puerto Rican pianist/composer Jose Negroni and his son, the powerful gifted young drummer Nomar Negroni, celebrates the tenth anniversary of the Miami based ensemble that continues to garner international acclaim in jazz and world music circles. Jose Negroni, a disciple of legendary Sonora Ponceña pianist Papo Luca and an esteemed educator, renowned for his work at native island’s Conservatory of Music, established the band in 2002 as a vehicle for his unique artistic vision, combining elements of jazz, AfroCaribbean and European classical musics. Utilizing the potent polyrhythmic sensibilities of Berklee educated Nomar Negroni, nominated in 2008 as Best Drummer of the Year by The Latin Jazz Corner, the group realizes a visionary music that is greater than the sum of its individual parts. 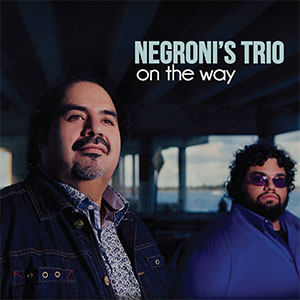 The fifth CD by the band, On The Way, also introduces the multifaceted talent of young Josh Allen on electric and acoustic basses, filling the slot that has alternately featured such greats as John Benítez, Marco Panascia and Jonathan Estes. Augmenting the trio on several tracks is master LatinJazz saxophonist Ed Calle, whose virtuosic voice adds yet another distinct musical element to the potent, but lyrical compositions and arrangements of Jose Negroni. The resulting program yields arguably the best documentation of the band to date, shining a spotlight on the unique melding of genres into an immediately identifiable Negroni sound that while completely individual, is universally appealing. A sound that is sure to earn the ensemble increased recognition.

Saxist Ed Calle joins the group on Matices. Introduced with a pretty, delicately waltzing piano prelude, the episodic piece suddenly shifts gears into a rapid fire staccato line flawlessly executed in harmonic tandem by piano and saxophone. A brief solo drum interlude flows into a dialogue with piano, followed by a classically tinged piano solo that precedes the controlled frenzy of Calle’s gritty sax solo that drives the piece to a contrasting peaceful conclusion.

Blue Forest opens with a breathtaking two-handed piano presentation by Jose Negroni, as his left pounds out a powerfully rhythmic progression, while his right weaves an attractive melodic line over it. The pianist then solos straight ahead over Allens’s fast walking acoustic bass and Nomar’s swinging drums, showing off his jazz chops before culminates in climactic drum solo over vamping piano.

Jose Negroni’s original arrangement of the beautiful Bruno Brighetti/Bruno Martino classic Estaté begins with a marching ostinato that seamlessly segues into the well known melody. The pianist improvises splendidly, modulating tempos over Allen’s complementary to make the music his own. The bassist is also spotlighted with his own lyrical solo, propelled by Nomar’s tasteful brushwork.

Ed Calle rejoins the group on Dancing With The Bass, a four-way conversation that recalls the sound of Wayne Shorter’s Weather Report tenure. Each of the quartet’s members is heard to great effect on the track, both individually and as part of the flawlessly integrated unit.

Oak Tree is Jose Negroni composition that combines elegant classicism with swinging jazz rhythms and even a bit of pop music melodic sensibility. The rhythm section stretches out Negroni’s Trio style with fleet piano, solid bass and dancing drums each in the forefront at various times, sharing the ever shifting spotlight.

The soprano saxophone of Ed Calle is featured on Expressions. Another powerfully rhythmic song penned by Jose Negroni, the saxist his heard in staccato dialogue with piano and drums on the piece’s opening choruses and later in floating legato lines that highlight his lyrical voicelike sound before he takes flight on an intensely visceral journey.

Jose Negroni’s inventive arrangement of the popular music chestnut My Way, with its Debussy influenced pastoral impressionism, returns the song made famous in America by Frank Sinatra to the it’s original French setting, where the melody, composed by Claude François and Jacques Revaux in 1967, was first titled Comme d’habitude. Featuring Allen’s lush arco bass, the pianist’s beautiful interpretation replaces the braggadocios tone of Sinatra’s enormously popular version with a melancholic gracefulness that brings out the true beauty of the song.

Looking For You brings Ed Calle’s tenor back into the fray. Built upon a Spanish tinged Bachish progression, the track is a rollicking tour de force propelled by Allen’s bass guitar into a Trane/Elvin like sax/drum duo that is the song’s centerpiece. Calle wails mightily, driven to ecstatic heights by his colleagues.

The concluding Retrospection invites violinist Frederico Bristos to join the trio on the date’s final outing. Overflowing with powerful emotion and refined beauty it is a fitting finish to a date that does not sacrifice sophistication in its show strength.

An album of uncommon originality, On The Way confirms that Negroni’s Trio is one of the most distinctive ensembles in music. And while the disc’s title aptly describes it journey towards greater recognition, the music it contains also demonstrates emphatically that the group is not just “on the way” but that it has indeed arrived.