On Wednesday, November 6th, 2013, at 7:30PM and 9:30PM, Cuban Pianist, Composer and Bandleader Manuel Valera and his New Cuban Express are celebrating the CD Release Party for their new album “Expectativas”. The concert will take place at the Jazz Standard in New York City. If you are in the area make sure you don’t miss it.

Since arriving in New York from his native Havana, Manuel Valera has gone from strength to strength as a sideman, composer, bandleader, and recording artist. On stage and in the studio, he’s lent his prodigious talents to such notable artists such as Arturo Sandoval, Paquito D’Rivera, Brian Lynch, Dafnis Prieto, and Jeff “Tain” Watts, among many others. Valera has been awarded several grants for composition, including Chamber Music America’s New Jazz Works and the ASCAP Young Jazz Composer Award. He’s trav­eled the world to perform in over 30 countries at some of the biggest international venues and festivals. But the project closest to Valera’s heart is his own outstanding band – and this Jazz Standard one–nighter celebrates the release of Expectativas, his seventh CD as a leader and the successor to his 2012 release New Cuban Express, nominated for Best Latin Jazz Album in the 2013 GRAMMY Awards. 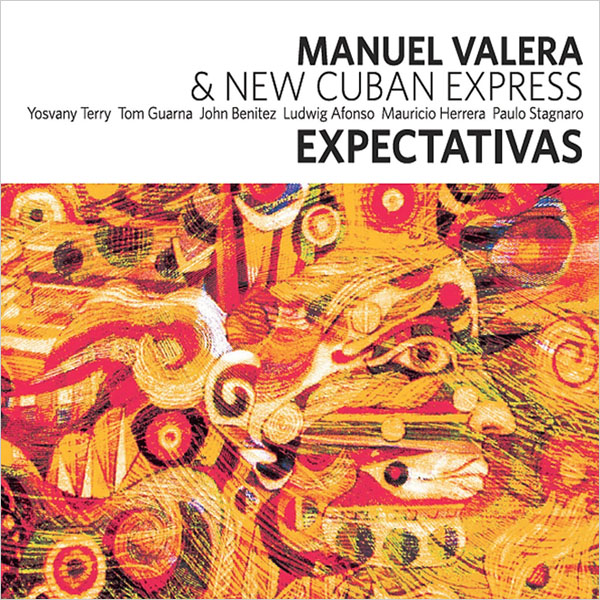 About the Music on Expectativas:

The music on this recording represents my continued growth as a composer, pianist and bandleader. I feel very fortunate to have the opportunity to work regularly with the NCX and I feel a deep connection with all the members of the band. Here’s a brief synopsis of each track.

“Chamber Timba” is a composition that infuses the high energy of timba music with the subtleties of Jazz. This is a concept that we have been working on as a band. “Expectativas” is a tune that has been part of the band’s repertoire and I’ve always felt a sense of hope and innocence from this composition. “Perception” is a gentle cha cha chá that goes thru some rhythmic changes. In the middle it goes to a danzón and at the ends it becomes a makuta with a timba flavor. “Chennai Express” is a tune dedicated to all my friends at S.A.M. (Swarnabhoomi Academy of Music) in southern India where I had the pleasure of teaching at the beginning of 2013 for 7 weeks. This tune is in 11/4.

I composed “Isabelita” when my daughter Isabel was born in 2008. She inspires everything I do. “Jben Timbus” is a feature for one of my favorite bass players anywhere: John Benitez. I’m so lucky he also happens to be part of the NCX! “La Gloria Eres Tu” is an amazing bolero by the great Cuban singer-songwriter Jose Antonio Mendez. This track is really exciting for me because my father, Manuel Valera (the saxophonist), is performing with us on this one. He has one of the most beautiful alto sounds out there and I’m really excited that we finally got a chance to record something together with the NCX.

“En Cinco” is a really old tune of mine. I actually recorded a different arrangement of this song on my debut CD Forma Nueva with El Negro Hernandez and John Patitucci. It has stayed in my repertoire thru the years and I’ve performed it in all sorts of formats—from solo piano to big band. On this track the band really opens up! “Open Window” is a song that gives you a sense of all the possibilities and different paths that one could take at any point life. “Descarga” is a tune based on the rhythmic motif from “Sandunga Mandinga Mondongo” by the great Cuban pianist Frank Emilio Flynn. “Las Americas” is a ballad that I dedicate to the entire American continent and to all our friends from the Western hemisphere.