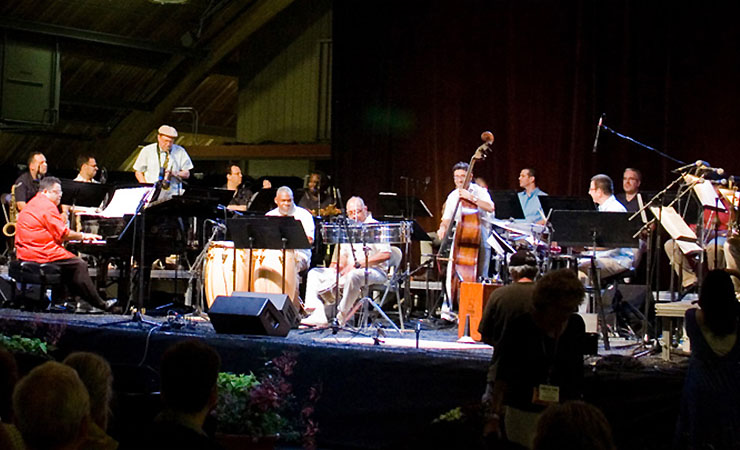 The Evening Also Serves as the National CD Release Event for Arturo O’Farrill’s Latest Album The Offense of the Drum Featuring Live Performances of Two New Compositions from the Album: “They Came” w/ Special Guests DJ Logic & Christopher “Chilo” Cajigas and “The Offense of the Drum: The Oppressor & The Liberator” w/ The Afro Latin Jazz Orchestra.

(Harlem, NY – Tuesday, March 25, 2014) – On Saturday, May 10, 2014, the Apollo Theater will present the world premiere of GRAMMY® Award-winning pianist, composer, and educator Arturo O’Farrill’s “Afro Latin Jazz Suite,” as part of the Harlem Jazz Shrines Festival. O’Farrill will appear with the Afro Latin Jazz Orchestra and an array of renowned special guests to pay tribute to the 65th anniversary of Afro Latin Jazz pioneer Chico O’Farrill’s composition of the “Afro Cuban Jazz Suite,” and to celebrate the Apollo’s 80th anniversary. Chico O’Farrill, Arturo O’Farrill’s father, is a distinguished Apollo Theater alumnus. Building on the continuing role that the Apollo Theater plays in the development of Latin Jazz, Arturo’s “Afro Latin Jazz Suite” will be a re-imagination of his father’s historic work and will borrow musical textures from Colombia, Peru, Venezuela as well as Cuba, Puerto Rico and other Pan American and international sources. The evening will also serve as the national CD release event for O’Farrill’s new recording, The Offense of the Drum, to be released by Motéma Music on May 6, 2014, and will premier a new work by Arturo O’Farrill in honor of Randy Weston, as well as additional work from the Afro Latin Jazz Orchestra repertoire.

GRAMMY® Award-winning pianist, composer and educator Arturo O’Farrill is a vital figure preserving the heritage of Afro Latin jazz while advancing the very definition of the genre itself with innovative new works fit for the world’s acclaimed stages. As leader of the Afro Latin Jazz Orchestra, and founder and Artistic Director of the non-profit, Afro Latin Jazz Alliance (ALJA), Arturo O’Farrill – a cultural advocate for more than two decades – has consistently pushed boundaries with unprecedented musical programming and educational offerings throughout New York City and around the globe. Appearing at the Apollo Theater is a significant recognition of his singular work; O’Farrill will proudly present his latest compositions at the Harlem Jazz Shrines Festival – a celebration of the rich legacy of jazz in the uptown community, co-presented by the Apollo Theater.

“The Apollo commission is huge for me personally,” says O’Farrill, “because the Apollo is sacred ground for innovative arts programming. It is the people’s performing arts center, and as such it represents an audience of the most discriminating ears (and feet) on the planet. Venues like the Apollo have a unique ability to program creatively because the definitions of jazz and Latin jazz are left open. It’s this non-pandering spirit that inspired my father to write ‘The Afro Cuban Jazz Suite’ and the same freedom I feel today. Thank you Apollo for believing in me, in Latinos performing cutting edge jazz and for progressing our Art.”

To honor one of the living legends of the jazz piano and composition, Arturo will also present the “African Sunrise Suite” for his close friend and colleague Randy Weston. The Afro Latin Jazz Orchestra welcomes special guests Billy Harper, Lewis Nash, and Weston himself for the premiere of this new work on the Apollo stage.

This night at the Apollo Theater during the Harlem Jazz Shrines Festival will also serve as the national CD release event for Arturo O’Farrill’s latest album The Offense of the Drum, to be released by Motéma Music on May 6, 2014. Two standout compositions from the new album will be performed, including “They Came” featuring DJ Logic and rapper/poet Christopher “Chilo” Cajigas, and “The Offense of the Drum: The Oppressor & The Liberator.” The former chronicles the contributions made by Puerto Ricans to American culture and pays special attention to the Nuyorican culture. Caligas notes, “‘They Came’ is a poem that breaks into a 36-bar hip-hop section and ends in poem format. It’s inspired by Pedro Pietri.”

The two-part title suite, “The Offense of the Drum: As Oppressor & As Liberator,” is the flagship composition on the recording inspired by drum circles in NYC being outlawed, and reflecting the idea that the drum is so politically charged as a means for change. The Offense of the Drum as a whole examines the role of the drum as a vehicle for resistance and liberation. Arturo comments, “The drum is an amazing communication tool. It’s a way to connect diverse communities, and is really the heartbeat of our cultures. So, the drum can be seen as offensive to those in power, who try and control our freedom of expression.”

The 75-minute recording is a collection of new commissions from O’Farrill’s annual Symphony Space seasons, and ”serves as a medium for changing the perception of big band music and Afro Latin Jazz by incorporating hip-hop, DJ techniques, and spoken word,” says Arturo.

The Offense of the Drum spotlights percussion from almost every corner of the world, featuring 28 different types of drums: the taiko drum from Japan, djembe from Africa, barriles and bombas from Puerto Rico, tumbadoras from Cuba, bombos from Colombia, cajons, maracas, bongos, shekeres, claves, cowbells, cuicas, tambourines, timbales and turntables. Along with the two special guests appearing at the Apollo on “They Came,” The Offense of the Drum features Vijay Iyer, Edmar Castañeda, Donald Harrison, Pablo Mayor, Miguel Blanco, Antonio Lizana, Jason Lindner, and others, all of whom infuse the recording with the music of New York City, Spain, Colombia, Cuba and New Orleans, all regions that gave birth to the jazz aesthetic.

”Trying to put into words the multitude of sounds on this album is a difficult task,” says executive producer Kabir Sehgal. “Arturo is many things: maestro, composer, pianist, bandleader, father, son, husband and friend. Most of all, he displays a mighty spirit, enshrined with generosity and love. This album is as much a sacrament of his soul — as it is a meditation on the drumbeats of life.”

The Offense of the Drum is co-produced by O’Farrill, Todd Barkan, Eric Oberstein and Kabir Sehgal, and marks O’Farrill’s debut with Motéma Music. The album will be nationally released on May 6, 2014 in connection with the Apollo Theater performance.

About the Apollo Theater

The Apollo is a national treasure that has had significant impact on the development of American culture and its popularity around the world. Since introducing the first Amateur Night contests in 1934, the Apollo Theater has played a major role in cultivating artists and in the emergence of innovative musical genres including jazz, swing, bebop, R&B, gospel, blues, soul, and hip-hop. Ella Fitzgerald, Sarah Vaughan, Billie Holiday, Sammy Davis, Jr., James Brown, Michael Jackson, Bill Cosby, Gladys Knight, Luther Vandross, D’Angelo, Lauryn Hill, and countless others began their road to stardom on the Apollo’s stage. The Apollo Theater’s new artistic vision builds on this legacy. New Apollo programming has music as its core, driving large scale and more intimate music, dance, and theater presentations. The Apollo will continue to present historically relevant programs, as well as more forward-looking, contemporary work. Based on its cultural significance and architecture, the Apollo Theater received state and city landmark designation in 1983 and is listed on the National Register of Historic Places. For more information, visit www.apollotheater.org.

Three esteemed Harlem cultural organizations – the Apollo Theater, Harlem Stage and Jazzmobile – have joined forces to present Harlem Jazz Shrines, an annual festival celebrating the rich legacy of jazz in the uptown community. Now in its fourth year, this week-long festival creates a resurgence of jazz in Harlem. Jazz will be presented in all its forms and formats, including jazz, concert, club, cabaret, and dance events, with a dynamic range of programming highlighting the role that local Harlem venues have played in the development of the genre. Featuring a mix of performances appealing to novices and jazz aficionados, the festival draws a diverse audience of neighborhood residents, New Yorkers, and tourists. Tickets start at the affordable price of $10 (unless otherwise noted), and festival programming is arranged so that audiences have the option of attending several events each day.