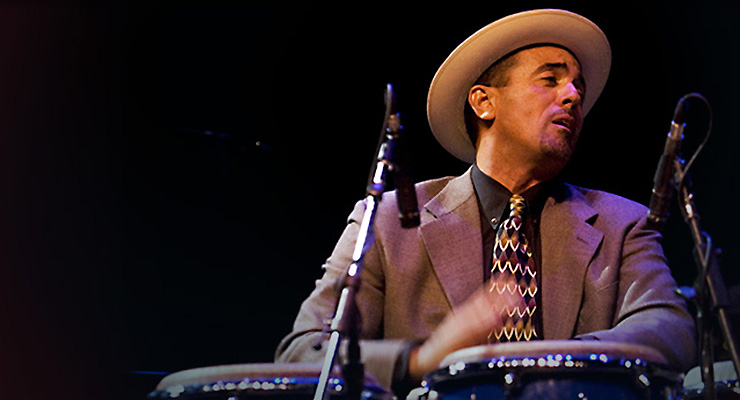 Four of the Bay Area’s greatest vocalists join The John Santos Sextet for “Unusual Standards,” an evening of classic jazz staples, re-imagined and revitalized with the spirit of Latin jazz.

One listen to the soulful strains of this Mississippi native’s voice will leave no doubt why she’s called “The Dynamic Miss Faye Carol.” Inspired by jazz royalty Betty Carter as well as R&B queen Aretha Franklin, Carol rose up through the East Bay funk scene that produced Tower of Power, The Pointer Sisters and Cold Blood to establish herself as a preeminent voice in Bay Area jazz.

Like Faye Carol, Kenny Washington has worked extensively with renowned San Francisco bandleader Marcus Shelby and was the featured vocalist at the Mark Hopkins Intercontinental Hotel’s famous Top of the Mark for nearly a decade. The New Orleans-born Washington has toured the world and back, recently headlining at Dizzy’s Club Coca-Cola in New York with vibraphonist Joe Locke.

With her stunning musicality and warm, enveloping voice, Texas native Kellye Gray is one of the most accomplished jazz vocalists on the national scene. Over her twenty-year career, Gray’s profile has continued to grow by leaps and bounds, recording a half-dozen albums as a leader and logging performances at Lincoln Center, the Spoleto Festival and Yoshi’s.

Berkeley-raised singer Destani Wolf has infused her big, bold, beautiful voice with countless artists including Crown City Rockers, John Santos, Bobby McFerrin offshoot SoVoSó, and The Pharcyde. Her music has been featured in “So You Think You Can Dance,” and the theme song of the NBC’s “Sing-Off. Don’t miss this celebration of the jazz standard, presented in a decidedly Latin vein.

Far more than a master percussionist, John Santos is an invaluable educator and cultural activist, a keeper of the Afro-Caribbean flame steeped in Cuban and Puerto Rican folkloric traditions as well as salsa and Latin jazz. Born and raised in San Francisco’s Mission District amidst an extended family of Puerto Rican musicians, he’s been at the center of the Bay Area’s Latin music scene for nearly four decades. He has served on the Smithsonian Institution’s Latin Jazz Advisory Committee and has played an essential role in expanding Latin jazz’s rhythmic lexicon beyond the foundational Cuban grooves. His programming as a Resident Artistic Director reflects his pan-Caribbean sensibility.