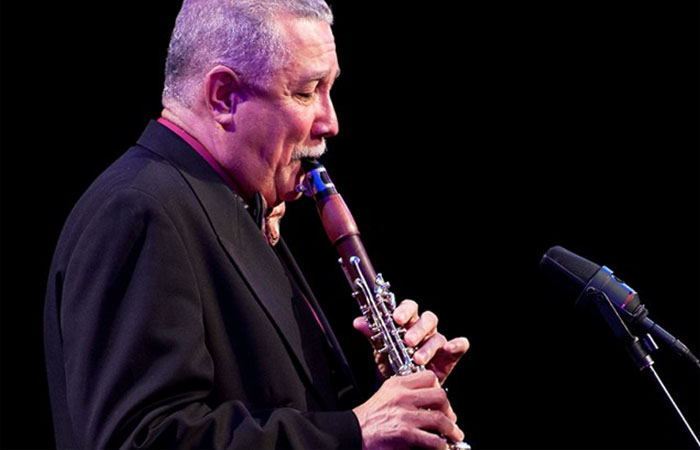 “After so many years of working with music and musicians from Argentina, the USA, Paraguay, Puerto Rico, Uruguay, Trinidad, Perú, Venezuela, Brazil, Mexico, Cuba, and the Dominican Republic,” said D’Rivera. “I’m convinced that the best way to establish a common link between those music styles is through the jazz language.”

Like his mentor Dizzy Gillespie, virtuoso clarinetist and saxophonist D’Rivera possesses a deep commitment to the cultural exchange between jazz and Latin music. Through composers like Ernesto Lecuona, Antonio Carlos Jobim, Rafael Hernandez, and Chucho Valdés (with whom D’Rivera worked with as a member of his ensemble Irakere in the 1970s), D’Rivera will delve into South American musical styles as sources for the enrichment of contemporary jazz music. A founding member of Gillespie’s United Nations Orchestra, D’Rivera is also a Carnegie Hall Lifetime Achievement Award recipient, who ranks among the likes of Benny Goodman and Sidney Bechet.

Jazz at Lincoln Center’s Paquito D’Rivera: Around The Americas will stream live in high-definition audio and video for free to a global audience via jazz.org/live.  The concert will also be available on Livestream’s mobile and connected TV applications with real-time DVR, chat, photos, and other materials available to fans worldwide.

Tickets can be purchased through jazz.org 24 hours a day or CenterCharge at 212-721-6500, open daily from 10am to 9pm. Tickets can also be purchased at the Jazz at Lincoln Center Box Office, located on Broadway at 60th Street, ground floor. Box Office hours: Monday–Saturday from 10am to 6pm (or 30 minutes past curtain) and Sunday from noon to 6pm (or 30 minutes past curtain)  Hot Seats, $10 seats for select shows in Rose Theater and The Appel Room (9:30pm performances only), are available for purchase to the general public on the Wednesday prior to each performance. Subject to availability. Jazz at Lincoln Center’s Hot Seats Ticket Discount Program is supported, in part, by public funds from the New York City Department of Cultural Affairs in partnership with the City Council.