“A leading figure among a new wave  of promising young Afro-Cuban piano stars.”
– TIME OUT NY 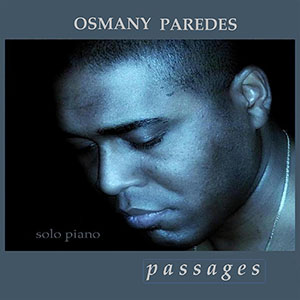 Cuban pianist/composer Osmany Paredes will perform a concert  to present his solo album,”Passages” at Jazz Standard on Tuesday, April 23 2013. “Passages” was produced by the legendary engineer/producer John Fischbach – best known for his work with Stevie Wonderand Cassandra Wilson’s recent Grammy-winning albums – at his New Orleans studio, Piety Street Recording. The album, a tour de force featuring eight original compositions, shows Osmany Paredes to be the most outstanding Cuban pianist of his generation,the heir to Cervantes and Peruchin.

“His muscular yet lyrically nuanced sound embodies the entire Afro-Cuban jazz tradition… and then some.”
– The Village Voice

Osmany Paredes’ stunning debut at Jazz Standard’s “New Dimensions in Latin Jazz” series in 2007 established the young Cuban pianist/composer as one of the outstanding participants in the new wave of AfroCuban jazz being created in New York. Osmany’s lyrical compositions and virtuoso technique draw on the training in AfroCuban rhythms that began in childhood with his percussionist father, Guillermo Paredes, as well as the rigorous study of classical piano at Havana’s National School of Music and the practical experience as the pianist with the quintessentially Cuban charanga group of Enrique Jorrin — the group for which Ruben Gonzales, the pianist of Buena Vista Social Club, played for years.”Steeped in the European classical tradition, enamored of jazz, and fully conversant with Cuban popular music dating back to the 1920s, Osmany Paredes is a thrilling player who combines percussive attack with a vivid harmonic imagination.” – Andrew Gilbert, The Boston Globe