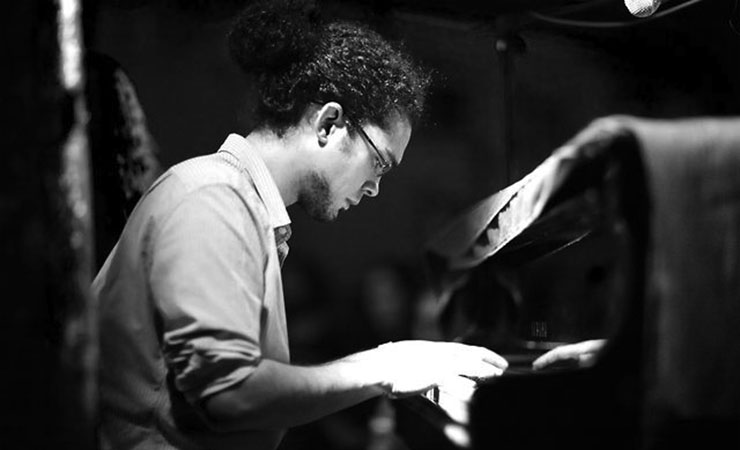 Cuban-born American pianist and composer Fabian Almazan just released his new album Rhizome through Blue Note/ArtistShare. Almazan will celebrate the release with an engagement at Jazz Standard in New York City next March 27-30 (Music charge: $25/$30 (Friday & Saturday), as well as a May 7 performance at the Kennedy Center in Washington DC as part of their Blue Note Records 75th Anniversary celebrations. Rhizome features Almazan’s trio with bassist Linda Oh and drummer Henry Cole with the addition of vocals from Chilean singer/guitarist Camila Meza, and a string quartet comprised of violinists Sara Caswell and Tomoko Omura, violist Karen Waltuch, and cellist Noah Hoffeld. The recording project is being funded directly by Almazan’s fan base through ArtistShare, the internet’s first fan-funding platform who pioneered the crowdfunding movement. Fans who participated in Almazan’s project were given access to his entire creative process behind the making of the recording.

“Fabian pushes the envelope in ways that excite people,” says Terence Blanchard, who brought Almazan into his quintet in 2007 and featured him prominently as both a pianist and composer on his recent GRAMMY-nominated Blue Note release Magnetic. “He’s someone who takes all of his experiences around the world and in different forms of music, and uses them to create something special.” 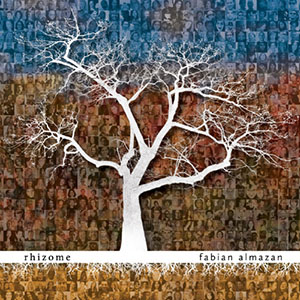 On Rhizome, Almazan picks up where he left off on his acclaimed 2011 debut Personalities. On that date Almazan revealed a tonal personality imbued with, to quote jazz journalist Larry Blumenfeld, “a bracing blend of lyrical Modernism, modern-jazz improvisation and postmodern sonic disruption.”

A ‘rhizome’ is a giant plant system where all of the individual plants seen above ground are actually intricately connected underground and provided nourishment from a single subterranean stem that enables them to survive the seasons, a concept that Almazan sees as a metaphor for life and seeks to express musically on Rhizome.

Almazan conceived the regenerative theme that connects the album’s diverse raw materials during the days following December 14, 2012, when 20 children were massacred at Sandy Hook Elementary School in Newtown, Connecticut. The elegiac-yet-affirmative title track is a response to the shooting and other contemporary manifestations of irrational violence and global strife. “I came to embrace the idea that humanity is somehow all connected; we’re all nourished from the same rhizome.”

Similar sentiments inform “Espejos” (“Mirrors”), dedicated to the proposition “that we are all reflections of each other, so it’s pointless to think of anyone as better or worse.” It’s one of Almazan’s two songs with original Spanish lyrics, which Meza delivers beautifully, as she also does on the album-concluding “Sol Del Mar.”

“When I heard Camila with her band almost two years ago, I immediately knew I wanted to work with her. Her voice is just right for this material, and she’s a great guitarist with a strong understanding of harmony. We both come from Latin America, and she understands the traditions behind singing there, how to deliver the message I’m trying to convey. Recently I’ve been embracing the idea that I’m between two cultures,” Almazan continues. “I’m playing jazz, but I consider myself Cuban and American, and I explore that with the music. I’m tapping back into my childhood by writing those lyrics in Spanish.”

In addition to the seven Almazan originals presented on the album, he also includes a fascinating treatment of Wayne Shorter’s “The Elders” from the 1978 Weather Report album Mr. Gone. He harmonizes Joe Zawinul’s lines from the original recording into thick chords for the strings, mirrors Jaco Pastorius’ hand-percussion on the electric bass with handclaps, elicits unusual timbres by having Cole play the outer skin of his bass drum with an upside-down mallet, and dresses the brew with electronically-generated colors and shapes.

“My father was a classical bassist who played electric bass in traditional Cuban music,” Almazan says. “He loved Jaco Pastorius. The first time I heard ‘The Elders,’ it completely blew my mind. That group was pushing boundaries. They were just playing music, and didn’t care what you called it. That composition had a big impact on how I think, and I want to pay homage to it.”

Another sort of boundary-pushing comes through on Almazan’s achingly intimate, legato treatment of the Harold Arlen standard “Stormy Weather,” where he complements his refined touch with exquisite string counterpoint. “It’s one of the first standards I heard when I started playing jazz,” he says. “I wanted to give it a personal sound, while acknowledging what the song is about—the pain that the person is going through and the liberation that comes when a relationship ends and you move on.”

However, Almazan has no intention of placing any of his musical relationships—whether with classical music, jazz or various Cuban strains—on the back-burner. “I enjoy the liberty that I get from jazz or improvised music to go with whatever I’m feeling—within certain boundaries, because I have to respect what the other musicians are feeling,” he says. “But I enjoy the whole spectrum of emotions that you get from music, and jazz and classical are two different ends of the same thing. I’m constantly trying to reach whatever it is I’m hearing.”