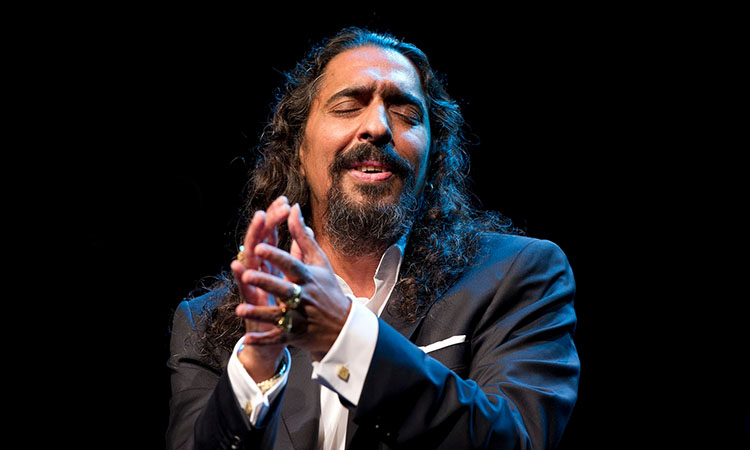 The late Paco de Lucía once said, “Diego has one of the most beautiful flamenco voices of our time, a voice of sweetness that flows over everything.” Three-time Grammy Award winner Diego El Cigala has captivated audiences all over the world with his gravelly voice and passionate interpretations, and now returns to Koerner Hall with an evening of Argentine tangos from his latest CD, Romance de La Luna Tucumana, plus favorites from Lágrimas Negras,  his CD with Bebo Valdés… “A conjurer of impulsiveness and abandon.” (The New York Times)

As part of the Special Music of The Americas Concert Series, Diego El Cigala makes his second appearance at Koerner Hall in Toronto, on Saturday, November 15, 2014 at 8:00 pm.

Raul da Gama, on his review of Romance de la Luna Tucumana writes: “Diego El Cigala has been made famous not only by his Grammys, but also by the seminal album, Lágrimas Negras, which he recorded with the great Bebo Valdés. However, that may be about to change. His 2013 recording… an ineffable nod towards the Argentinean tango, might soon to be recognized as his piece de résistance; a recording that is so limpid and beautiful that it is not conveyed to the ear as much as it melts into the soul.” Read the complete review.

Born into a family of flamenco musicians, Diego El Cigala began his solo career in 1997. A mere four years later he was at the Latin Grammy Awards, his Corren tiempos de alegría nominated for Best Flamenco CD. That was just the beginning of much bigger things to come, as a small initial collaboration on that CD between El Cigala and legendary Cuban pianist Bebo Valdés led in 2003 to a duo CD, Lágrimas Negras, which became one of the most astonishing breakthroughs in the realm of world music. Aside from winning El Cigala his first Latin Grammy, Lágrimas Negras became a huge global hit thanks to a combination of live shows, rave reviews, and word of mouth. This ground-breaking disc, with its fusion of gypsy fire and complex Cuban rhythms, sold more than a million copies worldwide.

El Cigala won his second Latin Grammy in 2006 for Picasso en mis ojos, which also became a bestseller. Then, in 2010, El Cigala travelled to Argentina, land of the tango, to immerse himself in that country’s powerful musical traditions. After merging his own band with two of Argentina’s tango masters – bandoneonist Néstor Marconi and guitarist Juanjo Dominguez – the results were, once again, musical magic. Cigala & Tango won a Latin Grammy for Best Tango, and went on to generate fantastic sales, great reviews, and a sold-out tour that played to more than 160,000 fans.

El Cigala’s newest recording, 2013’s Romance de la Luna Tucumana, offers a fresh take on the Argentine tango tradition. Notable for the contributions of Mexico’s famed electric guitarist Diego García, known as “The Twanguero” for his embrace of cowboy, Hawaiian, and surf music, this album went on to triumph at the 2013 Latin Grammys, winning El Cigala a third Grammy, his second for Best Tango. It is this landmark CD that is the focus of El Cigala’s current tour through North America, Europe, Australia, and South America.