A Benefit Concert For Dave Valentin 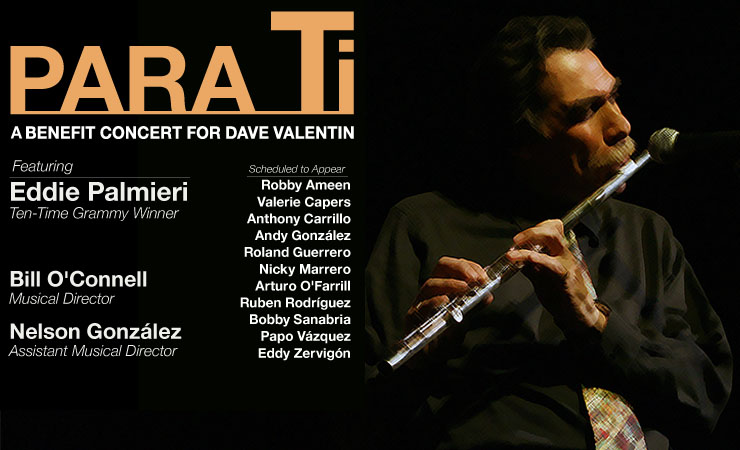 A benefit concert for the Grammy Award-winning Latin jazz flutist Dave Valentin will be presented in the Main Theater at the Hostos Center for the Arts and Culture on Tuesday, July 1, 7:30 PM.  Entitled “Para Ti” (For You), the concert will feature an acclaimed array of Latin jazz artists including Eddie Palmieri, Arturo O’Farrill, Bobby Sanabria, Nicky Marrero and others. A life-long resident of the Bronx, Valentin, who was known for donating his talents to many worthwhile causes and community organizations, suffered a stroke in March 2012 and has been unable to perform.  Through the support of sponsors including the Bronx-Lebanon Hospital Center, Hostos Community College, Manhattan Parking Group and WBGO Jazz 88.3 FM, all the costs of the concert, which will help Valentin with medical and living expenses, have been covered. Tickets are $25 and $35, with VIP tickets beginning at $175 and are available through the Hostos Center Box Office and can be purchased by calling (718) 518-4455 or through www.hostos.cuny.edu/culturearts.

“Dave provided the world with wonderful music, and supported many community organizations in the Bronx through his performances,” said Robert Sancho, Vice President of Development and External Affairs at Bronx-Lebanon Hospital Center, who is the concert co-organizer along with William Aguado. “It’s our turn to support him in his time of need.  We are grateful to all the artists that are coming together for what will be an exceptional evening of music.”

“Dave Valentin is a longtime friend of Hostos,” said Hostos Community College President Dr. Félix V. Matos Rodríguez, “as he performed on Hostos Center stages on many occasions since our opening, and donated his talents when needed for scholarship fundraisers and other functions. We are honored and delighted to host this musical tribute and fundraiser for him.”

According to Valentin’s longtime manager, Richie Bonilla, Dave is “grateful for the support of the community and his musician friends and is looking forward to attending the concert at Hostos.”

Valentin was born of Puerto Rican parents in 1952 in the Bronx. His love for music started quite early; playing bongos and congas before he was 10 and even working Latin clubs in New York by 12. His talent and interest took him to the High School of Music and Art in New York City, where he began studying percussion.  In college, Valentin changed to flute and complemented his formal education at school with private classes under master flutist Hubert Laws. While teaching music in the South Bronx public schools, Valentin appeared on his first recording in 1977 with Riccardo Marrero and the Group.  Two years later, he was the first musician to be signed to the popular GRP recording label, where he made some fifteen recordings as a leader.  In 2002, he won a Grammy Award with vibraphonist Dave Samuels and saxophonist / clarinetist Paquito D’Rivera for the Caribbean Jazz Project’s recording The Gathering.  In addition to leading his own groups, Valentin has served as musical director for Tito Puente and his Golden Men of Latin Jazz.

What:
Para Ti: A Benefit Concert for Dave Valentin

About Hostos Community College
Eugenio María de Hostos Community College is an educational agent for change that has been transforming and improving the quality of life in the South Bronx and neighboring communities since 1968. It serves as a gateway to intellectual growth and socioeconomic mobility, as well as a point of departure for lifelong learning, success in professional careers, and transfer to advanced higher education programs. The College’s unique “Student Success Coaching Unit” provides students with individualized guidance and exemplifies its emphasis on student support services.