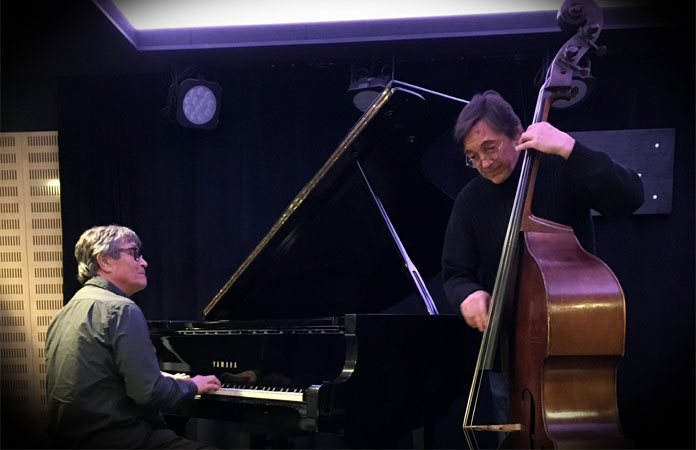 There are bonds that cannot be broken. Brotherhood and musical understanding are two such bonds. Pianist Chano Dominguez and bassist Javier Colina grew up together exploring musical genres that moved them like no other, namely jazz and flamenco (a music that is inherently tied to their Spanish identities and heritage). Their new recording, Chano & Colina, reunites the two after 15 years of pursuing differing musical courses.

It was in 1986 that the Cádiz born Dominguez met the Pamplona native Colina at Spain’s National Jazz Young Talents Contest, where the pianist won first prize. The two had much in common as they were both self taught and they were both fascinated by the possibilities of combining flamenco and jazz. Flamenco was engrained in their consciousness from early on. Dominguez hailed from the capitol of flamenco music and Colina’s northern Pamplona was the home of one of the masters of the form, the incredible guitarist Sabicas.

The two were able to develop their own, very unique language blending jazz and flamenco, thus developing a simpatico relationship in a short time. Soon thereafter, they formed the NeoBop ensemble in Madrid, which performed standards and original jazz material. Dominguez and Colina continued to play together regularly through the next decade. Their popular trio made its first recording, entitled Chano in 1992.

In 2002, Dominguez moved to Barcelona and the distance made collaboration between the two more difficult; they stopped playing together. Both musicians went on to accomplish some incredible things. Dominguez has led ensembles of all sizes, effectively establishing the flamenco jazz genre and even releasing two recordings on the illustrious Blue Note jazz record label. Colina has worked with some of the most highly regarded musicians in jazz and flamenco, including Bebo Valdés, Tete Montoliu, Al Foster, Chucho Valdés, Agustín Carbonell, Silvia Pérez Cruz and Diego El Cigala, among many others.

The two had not played together in 15 years when they decided to meet up and perform with a trio at the Clamores Jazz Club in Madrid in November 2015. The intimate connection that they had fused years before was undiminished. Plans to play together more regularly were quickly made. 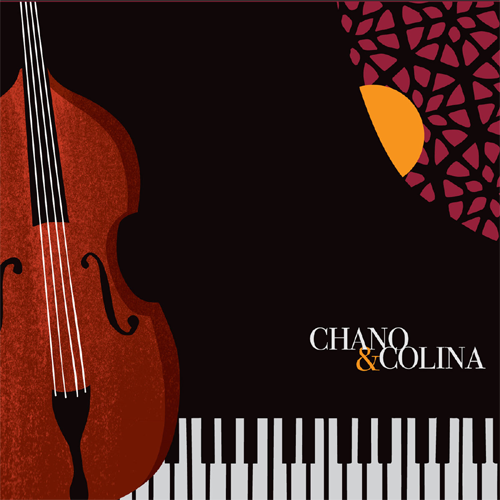 The recording Chano & Colina was culled from the duo’s live performance at Sala de Camara del Auditorio Nacional de Musica in Madrid on January 19, 2017. The performance captured the musicians’ incredible musical breadth and skill, not to mention their fascinating rapport as musicians and friends.

The program begins with Colina’s “Luces De La Fragua,” a festive tribute to the region where Dominguez was born . The track contains some intriguingly nuanced playing from both musicians. The Schwartz and Dietz standard “You the Night and the Music” receives a flamenco treatment with a rhythm straight from the tanguillos of Cádiz. Dominguez’s lovely “Habanera De La Habanera” was originally written for the WDR Big Band but is reduced here for a hypnotic duo treatment. The Wood and Mellin standard “My One and Only Love” is performed movingly in a waltz- time signature, while Dominguez’s tribute to Chick Corea, “Para Chick,” is an aggressive rumba that the duo had honed for years.

Under the aural influence of piano great Bill Evans, the duo’s take on Parker and Charles’ “We Will Meet Again” is done in a slow-flamenco rhythm that goes into double time upon each chord change. Michel Legrand’s haunting “You Must Believe In Spring” follows and fits their setting as a flamenco tango. The great guitarist and composer Paco de Lucia remains a huge influence on Dominguez and Colina. They perform the maestro’s wonderful ballad “Canción De Amor” to perfection and create some tremendous moments on his “Ziryab.” The program concludes with a spontaneous (and very fast) rendition of Miles Davis’s “Serpent’s Tooth.”

Building on a history and style they championed for decades, Chano Dominguez and Javier Colina have reunited to create a truly stunning recording that will stand as a perfect consolidation of their craft and influence on Chano & Colina.

To be released on June 1, 2018 on Sunnyside Records
Javier Colina – acoustic bass

Previous articleDafnis Prieto: To the Sunset… and Beyond
Next articleArtist Profile: Chano Domínguez