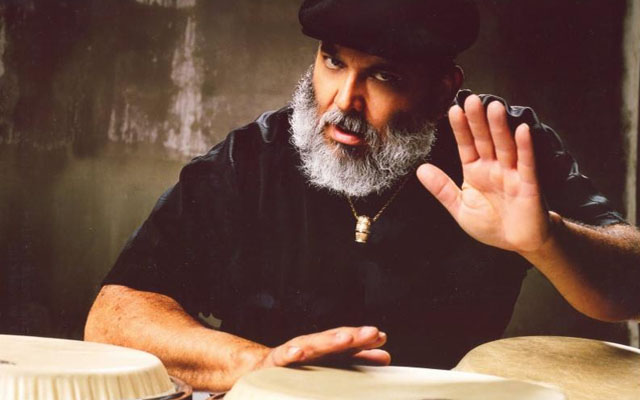 Inside Latin Jazz is an educational outreach series featuring interviews with leading Latin Jazz artists, and is made possible by the generous support of the BCM Foundation. Presented by the Whittier College Music Dept., Emerson Bran Management and the Ruth B. Shannon Center for the Performing Arts.

The Inside Latin Jazz series continues to offer fascinating and penetrating onstage interviews with leading Latin Jazz artists. Moderated by flute soloist and Professor at Whittier College, Danilo Lozano, this is something every lover of music will not want to miss.

The imaginative rhythms of Poncho Sánchez have made him one of the most influential conga players and percussionists in Afro-Cuban jazz. In addition to recording as a soloist, Sánchez has been featured on albums by the Jazz Crusaders, Eddie Harris, Freddie Hubbard, Tito Puente, Mongo Santamaria, Dianne Reeves, Joey DeFrancesco, and Terence Blanchard. Becoming a member of vibraphonist Cal Tjader’s Band in 1975, Sánchez remained with the group until Tjader’s death on May 5, 1982. By then, he had already planted the seeds for his own career as a bandleader. He recorded two solo albums — Poncho in 1979 and Straight Ahead in 1980 — and began performing with his own group in 1980, during Tjader’s vacations. A native of Laredo, Texas, Poncho Sánchez moved to Los Angeles at the age of four, where he was deeply influenced by the music he heard in the Chicano neighborhood in which he lived. Initially a guitarist, he played with a series of junior high school and high school rhythm & blues bands. Teaching himself to play congas, he spent hours practicing to Cal Tjader, Machito, and Tito Puente records. He was also deeply influenced by the hard bop sounds of the Jazz Crusaders. After more than two decades in music, Poncho Sánchez’s efforts paid off when his album, Latin Soul, received a Grammy award as Best Latin Album of 1999. Throughout the next decade, Sánchez continued to record, releasing such albums as 2000’s Soul of the Conga, 2001’s Latin Spirits, 2003’s Out of Sight!, 2005’s Do It!, 2007’s Raise Your Hand, and 2009’s hard bop-influenced Psychedelic Blues. In 2011, he paid tribute to the innovative Afro-Cuban recordings of Dizzy Gillespie and Chano Pozo by teaming up with trumpeter Terence Blanchard for Chano y Dizzy! Sánchez followed it up with a concert set entitled Live in Hollywood, with his Latin Jazz Band.

Inside Latin Jazz is an educational outreach series featuring interviews with leading Latin Jazz artists, and is made possible by the generous support of the BCM Foundation. Presented by the Whittier College Music Dept., Emerson Bran Management and the Ruth B. Shannon Center for the Performing Arts.