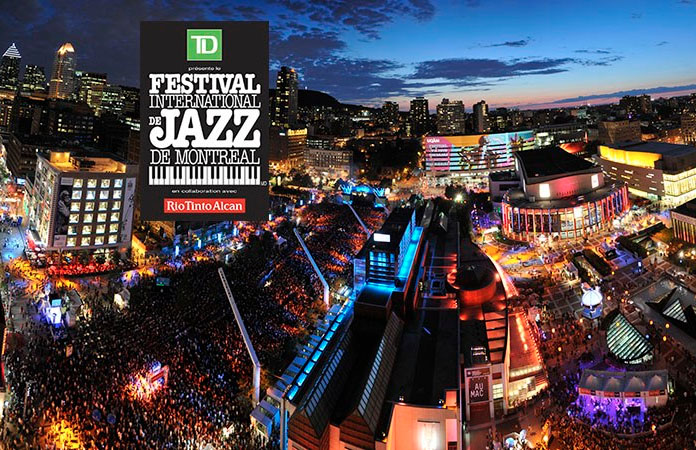 In 2019, the Festival International de Jazz de Montréal, presented by TD Bank Group in collaboration with Rio Tinto, will celebrate its 40th birthday with a grand gesture for the benefit of Montréalers, Montréal and its neighbourhoods.

The Festival will show its leadership with an ambitious development plan allowing it to expand its footprint all over the city, and reach out to citizenry everywhere. In partnership with the new Cultural Policy of the City of Montreal and new Tourism Montreal Development Strategy, the Festival will become a vehicle for all, promoting the discovery of our cultural and social wealth by anchoring itself in various neighbourhoods throughout the city. By continuing to occupy its central site in the Quartier des Spectacles with large-scale gatherings, indoor shows and family activities, this global Festival will meet the people thanks to the creation of new festival centres called “Hubs”.

By reaching out to more communities and inviting Montréalers and tourists to visit less-familiar areas of the city, these “Hubs” will promote contact between citizens and generate new spin-offs for the boroughs, in a spirit of inclusion and integration. This new vision, deployed starting in 2019, with a new “Hub” per year over 5 years, will allow many new neighbourhoods to benefit from this extraordinary cultural, economic and touristic engine.

These “Hubs” will be original, tailor-made experiences for the boroughs and their communities, in liaison with community organizations, merchants and citizens. They will be accessible free of charge and offer the same artistic quality as the Festival, respecting the principles of sustainable development and eco-responsibility.

“After creating so much wealth for Montréal, and revealing the potential of the Quartier des Spectacles, we are taking up the challenge of going one step further by putting our event at the service of the cultural, social, tourism and economic development of other Montréal neighbourhoods.”
– Jacques-André Dupont, CEO of the Festival International de Jazz de Montréal

“The Festival de Jazz de Montréal has been a vital economic force for the past 39 years. After contributing to the development of the Quartier des spectacles, this innovative, inspiring and inclusive Festival is bringing even more life to downtown Montréal and the many neighbourhoods where it unfolds. I am confident that this fresh approach will help vitalize and reinforce our cultural communities, while serving as an original, culturally broad-based model for everyone. Our new Festival will demonstrate how culture can stimulate development at all levels.”
– Valérie Plante, Mayor of Montréal

“As the Festival’s official presenter, we are thrilled with this innovative concept that will allow more Montrealers to gather around exciting shows. Our love and commitment to music is about bringing people together around common experiences, and the deployment of these new poles is a great fit for these experiences.”
– Sylvie Demers, President, Quebec Command, TD Bank Group.

“Rio Tinto is very proud to be associated with the Festival international de Jazz de Montréal. Wherever we operate, we respect the cultural diversity, lifestyles, heritage and preferences of our communities and neighbors. We work in partnership with communities to make sure we understand and protect cultural places and practices. We are pleased to support this new initiative to reach out more to local communities and promote arts and culture.”
– Gervais Jacques, Executive Director, Atlantic Operations, Rio Tinto Aluminum

“The more culture is accessible, the more people are interested in it. Deploying the Festival de Jazz in various Montréal boroughs will stimulate demand and contribute to the development of Cultural Quartiers. It will also enable local merchants to play a leading role in the entertainment functions of their neighbourhoods. We salute this initiative, which will celebrate culture right where people live, all while attracting new clientele to the Quartier des Spectacles.”
– Michel Leblanc, President and CEO, Chamber of Commerce of Metropolitan Montréal.

“I welcome this promising initiative, which will allow citizens and visitors to discover new neighbourhoods and make the Festival accessible to an even wider audience, all while maintaining its base in the Quartier des Spectacles. Moreover, the presence of the Festival in the heart of our cultural metropolis obviously manifests itself in public places, but also has a major role occupying indoor venues. This model helps keep the Quartier des Spectacles alive, and will come to fruition in innovative ways in other neighbourhoods.”
– Jacques Primeau, Chairman of the Board of the Partenariat du Quartier des spectacles

Over the next few months, the Festival team will have the pleasure of visiting various potential venues throughout Montréal, seeking out schoolyards, neighbourhood parks or vacant lots that are easily accessible and served by public transport, in effervescent sectors and dynamic living environment. The Festival also invites citizens and organizations to contact us to indicate their interest in hosting a future Festival hub: hubs@montrealjazzfest.com

Dedicated by the Guinness World Records as the largest jazz festival on the planet, the Festival International de Jazz de Montréal has been a synonym of musical passion for nearly 40 years, thanks to the initiative of its founders: Alain Simard, André Ménard, Denyse McCann and the late Alain DeGrosbois.

Alain Simard — Creator and developer of the major urban festival formula, one that has made Montréal and the Place des Festivals famous; manager of several big names of Quebec chanson and a renowned producer of shows, records and television, Alain Simard has promoted hundreds of artistic companies and artists of all disciplines, all over the world.