Arturo O’Farrill Journeys to the U.S.-Mexico Border on “Fandango at the Wall” 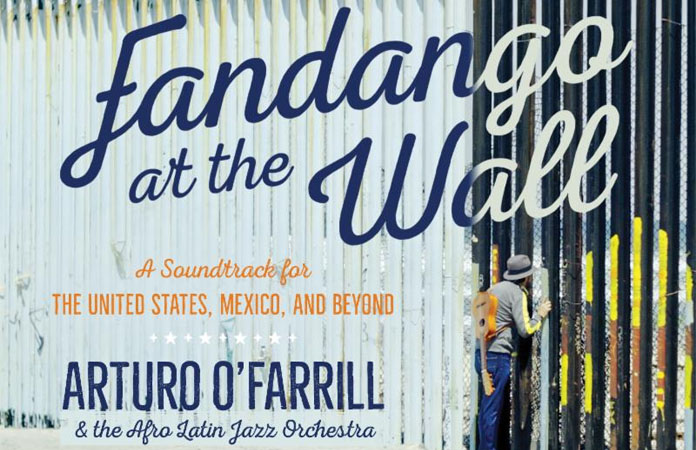 Arturo O’Farrill Journeys to the U.S.-Mexico Border to Erase Artificial Dividing Lines to Envision a Future of Inclusion and Collaboration Between Nations

Fandango at the Wall: A Soundtrack for The United States, Mexico and Beyond – Available September 28 on Resilience Music Alliance

Harlem, NY — Thursday, September 20, 2018 — From the barrage of “breaking news” alerts on the 24-hour news cycle to the incessant buzz and chirp of social media, there’s no shortage of reminders of the things that divide us: walls being built, lines being drawn, the notion of “difference” being wielded as a political weapon.

That’s what makes an artist like Arturo O’Farrill such an important voice for these times. As a pianist, composer, bandleader, educator, activist, and founder of the Afro Latin Jazz Alliance, O’Farrill has dedicated his life to not only crossing artificial borders but to erasing them in his wake. With his latest project, Fandango at the Wall, O’Farrill has created a stunningly ambitious and profoundly moving work that showcases the rich fruits that can grow from common ground.

Fandango at the Wall, due out September 28 via Resilience Music Alliance, is the brainchild of O’Farrill and his longtime collaborator and GRAMMY® Award-winning producer, Kabir Sehgal. The project brings together brilliant voices from a variety of cultural and musical traditions to tear down a variety of walls that isolate us — physical, musical, or cultural. The piece was inspired by Jorge Francisco Castillo, a musician and retired librarian who has organized the Fandango Fronterizo Festival for the past decade. The annual event gathers son jarocho musicians on both sides of the border wall between Tijuana and San Diego for a celebratory jam session.

“I found that idea so touching and elegant in its activism,” O’Farrill recalls. “I held it inside my soul and spoke to everyone I could about my hope to join the Fandango Fronterizo and record at the border, bringing special guests and making it a true collaboration.”

“Thinking about this awful, awful moment in history — not just American history but world history — I wanted to confront the darkness that has overcome all our lives,” O’Farrill says. “Faced with such stupidity and mediocrity, why not at least try to do something valuable? My first thought was to bring not just great artists but also people from marginalized nations. We understand that humanity and community are so much stronger than cultural constructs, physical walls, or geo-political borders. We saw this in action: we saw our people fall in love with their people and become one people.”

A bestselling author, investment banker, and military veteran, Sehgal helped transform O’Farrill’s long-held dream into a reality despite the logistical and political hurdles. Ultimately the project took on three forms: this astoundingly gorgeous album of music; a book on the history of the troubled U.S.-Mexico relationship with a foreword by renowned historian Douglas Brinkley and an afterword by former U.N. Ambassador Andrew Young; and an in-production documentary focusing on the lives of the son jarocho musicians.

“It falls upon private citizens and individuals to promote cross-border friendship and reapprochement,” Sehgal writes in his liner notes. “And that is ultimately the goal of Fandango at the Wall: to bring the people of the United States and Mexico together through music. After all, we don’t just share a border but families and friends, histories and futures. Our countries are interconnected, and our fates are interlinked.”

What is most striking about the music of Fandango at the Wall is that for all of the anger, frustration and strife that fueled its creation, it is an intensely joyous celebration that exults in the universal language of music. That notion has become a cliché, but it’s one that O’Farrill has always thrived on making vividly and unpredictably real. Hence the surprising hybrid of approaches on display: not just a mélange of world musics, but virtuosic jazz and striking contemporary classical approaches.

“It’s not just geopolitical borders that offend me,” O’Farrill explains. “It’s also cultural construct borders — the idea that there’s a high music and a low music, a high culture and a low culture. The belief that folk music isn’t as impressive or as important as jazz, or that Middle Eastern music isn’t valid because it’s not born in America. I wanted to destroy these walls, and in fact I found out that the presence of borders and walls and constructs serves an incredible purpose — it unites us in opposition even more than it divides us.”

Another border torn down by Sehgal and O’Farrill was the one between the pristine conditions of the recording studio and the thrilling festivities of the Fandango Fronterizo. Fandango at the Wall flows seamlessly between both settings, with five sessions undertaken in recording studios and outdoors at a live session straddling the border with music freely crossing back and forth.

“The most terrifying thing about being human is the fear of other people,” O’Farrill concludes. “Very few people have the freedom of spirit to embrace things they don’t understand. So I really love the idea that Mexican families who enjoy jarocho music will be introduced to the virtuosity of Regina Carter, or that hardcore jazzheads will discover Patricio Hidalgo. I’m hoping that people will listen to this album and whether or not they understand the words or enjoy the music, they’ll take a moment to think about human beings that are not like them.”

“Fandango at the Wall is ultimately a project of convergence,” Sehgal writes. “I hope that as you listen to this music, you’ll hear the possibilities of what the relationship between the United States and Mexico can become. And that we as artists and activists continue to create the world in which we want to live.”

Also available as a book, eBook and Audiobook from Grand Central Publishing and Hachette Audio

The non-profit Afro Latin Jazz Alliance (ALJA), co-producer of the album, was established by Arturo O’Farrill in 2007 to promote Afro Latin Jazz through a comprehensive array of performance and educational programs.