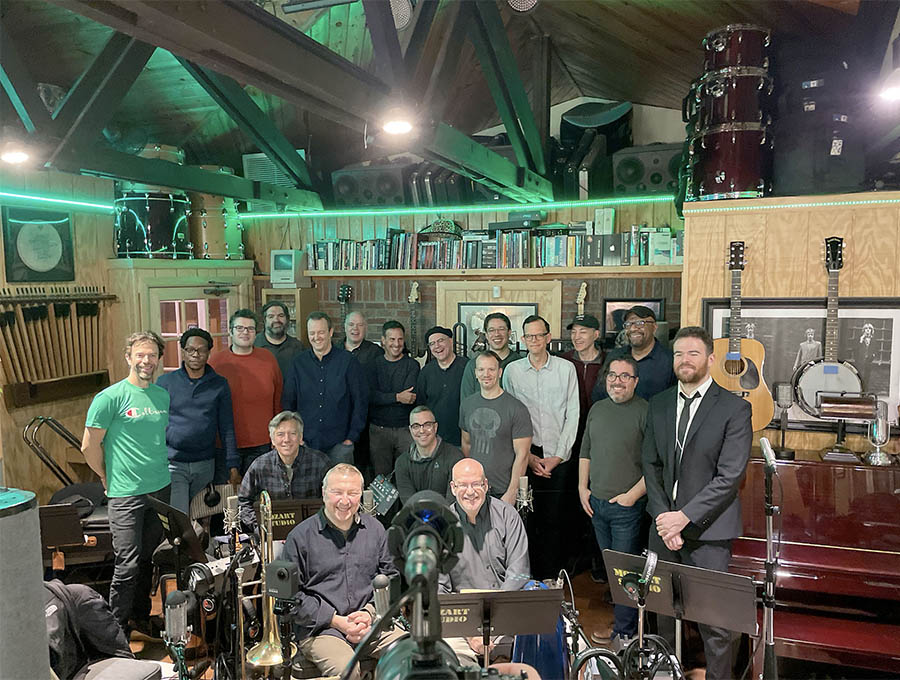 If you think Duke Ellington and Billy Strayhorn’s remarkable, 1960 interpretation of Pyotr Ilyich Tchaikovsky’s 1892 ballet, The Nutcracker, is the final jazz word on the popular orchestral work, think again.

“I knew that I could come up with something that had not been done before,” McCarthy said of The Pan American Nutcracker Suite. “I was certain that no one would play it this way. I’m classically trained; in my earlier life I played the piece a billion times. But this was going to be entirely different.”

“I did an enormous amount of study and preparation for The Pan American Nutcracker Suite,” McCarthy continued. “My job was to honor Tchaikovsky, but also make the music true to a certain sound I was hearing. We drew on influences from Venezuela, from traditional Chinese drumming, from New Orleans. In one movement we swing out of respect to Duke’s version, but we didn’t copy anything. We’re able to transport people to a different place.”

A brilliant instructor and academic, McCarthy is foremost, a performer. This Nutcracker is like nothingyou’ve heard before: primed with power, soothed with subtlety, graced by nuance, recited by McCarthy’s outstanding 18-man big band. Based on Tchaikovsky’s The Nutcracker, The Pan American Nutcracker Suite opens with “Overture.”

“Built on a groove known as ‘Afro,’” says McCarthy, “this movement gets the ball rolling as to how we ‘heard’ this iconic masterpiece, including a brilliant solo from trumpeter Alex Norris.”

“March” begins with “the famous snare drum part from Bolero and quickly moves into mambo,” McCarthy notes. “Then into straight ahead jazz. A melting pot, for sure.”

McCarthy describes his version of “Dance of the Sugar Plum Fairy” as “cha cha meets 6/8, with a touch of adventure in the ensemble writing.”

Introduced via a kinetic McCarthy/Torres percussion break, “Trepak” is a storm-bringer, a tumultuous arrangement that enchants and drives. The intro drum break sets a mambo mood, morphing into 6/8, followed by scorching solos all around.

Gil Evans gets a nod on the dreamlike “Arabian Dance,” its tranquil mood recalling Evans/Davis’ classic Sketches of Spain, and the arranger’s landmark Out of the Cool. Beauty meets simplicity and nuance in McCarthy’s mystery-inducing arrangement and NYABA’s exquisite soloing.

McCarthy opens “Chinese Dance” with bizarre hammering sounds. “Traditional Chinese drumming–that’s what my opening solo drum statement is based on,” he explained. “The groove and vibe bring a retro attitude. I was fiddling with metallic sounds, that stayed on the record.”

“Now we’re off to South America!” McCarthy says of the equally relaxing and exhilarating “Dance of the Reed Flutes.” “This was inspired by the rhythms of Brazil, including a partido alto with a bit of funk and great colors from guitarist Vinny Valentino and amazing lead trumpet Nick Marchione.” Resistance is futile, the sizzling rhythm section propelling dynamic brass and guitar work.

A balm, a mellow groove, a lilting send-off that Duke, Billy, and Pyotr would’ve undoubtedly dug, “Waltz of the Flowers” closes The Pan American Nutcracker Suite.

“It’s inspired by the Venezuelan groove, Joropo,” McCarthy explains, “set up perfectly by Venezuelan pianist Luis Perdomo. The accents of the groove fall on beats 2 and 3, which give it a lift. Vinny solos on acoustic guitar–the perfect flavor. Beautiful woodwind doubling by our sax section and ensemble playing throughout.”

Downbeat Magazine hailed Joe McCarthy, writing “The Afro-Bop Alliance Big Band, captained by drummer Joe McCarthy, occupies a singular spot in the timeline of Afro-Cuban ensembles, at once a torchbearer of the genre’s storied history and also one of its fiercest innovators.”

The Pan American Nutcracker Suite confirms Joe McCarthy’s vision: reinventing the past for the present, transporting the listener beyond.