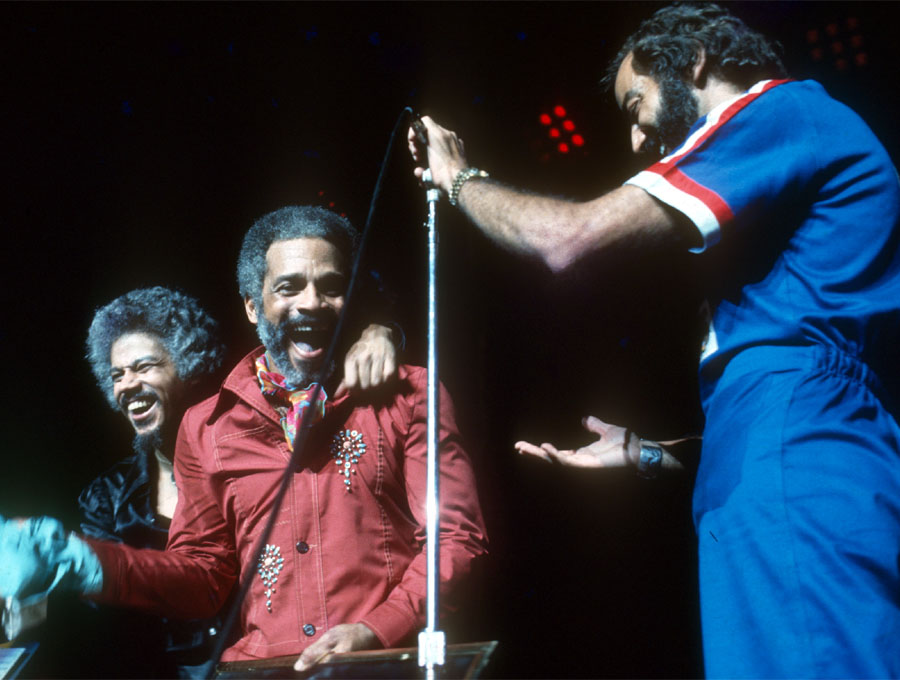 Craft Latino is proud to present an all-analog remastered 50th Anniversary vinyl reissue of Lo Último En La Avenida, the soulful salsa album that confirmed Ismael Rivera’s creative apex as a solo vocalist, following his departure from Rafael Cortijo’s visionary orchestra. An intimate set boasting luminous dancefloor anthems, this 1971 album is revered as one of the most honest and vibrant LPs in tropical music history.

Out on October 22nd, and available for pre-order today, the new edition of Lo Último En La Avenida was remastered from its original analog master tapes by Kevin Gray at Cohearent Audio and pressed on 180-gram audiophile vinyl. The iconic album will also be released in hi-res digital for the first time, including 192/24 and 96/24 formats. In addition, exciting bundle options that include a commemorative Lo Ultimo En La Avenida T-shirt are being offered at Fania.com.

This release is part of Craft Latino’s initiative to present high-quality vinyl reissues of the most treasured LPs in Fania’s catalog. These reissues are remastered for the first time from the original tapes, giving fans the best experience when listening to historic albums.

One of the godfathers of Afro-Caribbean music, Ismael Rivera was born in Santurce, Puerto Rico, in 1931. He was only a teenager when he became the star vocalist with Cortijo’s pioneering combo, blending Puerto Rican folk formats like bomba and plena with the popular dance music from neighboring Cuba. Cortijo was one of the first artists who cemented the specific style known as salsa—and the endearing Maelo, with his streetwise wit and keen understanding of the clave—is considered to this day one of the quintessential soneros, or traditional salsa singers.

Sadly, Rivera’s blossoming career with Cortijo was sidetracked by a stint in prison after being arrested for drug possession. He emerged from jail with the desire to completely reinvent his career and launched himself as a solo artist in New York. Lo Último En La Avenida finds him on a creative apex, backed by the band of another legend: Francisco Ángel Bastar Ramos, better known as Kako, a fellow boricua and timbalero who had recorded memorable sessions with the Alegre All-Stars. Accompanied by Cuban conguero Patato, Kako and Maelo developed a more intimate ensemble, transporting the singer’s transcendental singing into a musical universe that mirrors the swinging salsa explosion taking place at the time in New York City.

There are no boleros in Lo Último En La Avenida. This is a party record from beginning to end, and Maelo outdoes himself on a reckless reading of the Rafael Hernández classic “El Cumbanchero” that shows off his uncanny gift for speed and improvisation. Written by Carlos Suárez, “Mi Negrita Me Espera” is one of the most tender and endearing classics in the tropical songbook—the story of a salsa singer who goes out at night to perform at dancehalls but worries that the most important woman in his life will stay up waiting for him. The woman in question is none other than Doña Margot, Maelo’s mother and an important figure in salsa lore. “Entierro A La Moda,” a detailed description of the singer’s fashionable funeral with plenty of illustrious musical guests, showcases the man’s wicked sense of humor.

Rivera’s life was steeped in tragedy. By the late ’70s, his vocal cords had lost their luster, and the excesses of the past took a toll on Maelo. He died in 1987, in the arms of his mother, of a heart attack. He was only 55. His life, however, was also filled with joy, love and creativity. Fifty years after its release, Lo Último En La Avenida transports us to a moment of triumph for Maelo Rivera. Soulful and healing, it showcases salsa as the incredibly sophisticated genre that it really was.

Highly influential, both musically and culturally,?Fania?Records spread the sound of salsa music from the clubs of New York City to the rest of the world and became a revered global brand in the process.?Fania’s master recording catalog is the definitive home for genres such as Latin big band, Afro-Cuban jazz, boogaloo, salsa and Latin R&B and includes artistic giants such as Celia Cruz, Willie Colón, Héctor Lavoe and Rubén Blades. With the creation of the international supergroup known as the?Fania?All-Stars, the label’s signature musical style became known as the “Fania?Sound.”?Fania’s rich master catalog also includes the Pete Rodriguez’s boogaloo classic “I Like It Like That”? which was sampled by Cardi B in her #1 hit “I Like It.” Additionally, three Fania Recordings, Celia & Johnny by Celia Cruz and Johnny Pacheco,?Azucar Pa’ Ti?by Eddie Palmieri and?Live at Yankee Stadium?by the?Fania?All-Stars, appear in the National Recording Registry, a list of sound recordings that “are culturally, historically or aesthetically important, and/or inform or reflect life in the United States.” For more info, visit Fania.com and follow on YouTube, Facebook, Twitter, Instagram, and TikTok.

Craft Latino is home to one of the largest and most prestigious collections of Latin music master recordings and compositions in the world. Its rich and storied repertoire includes legendary artists such as Antonio Aguilar, Joan Sebastian, Pepe Aguilar, Celia Cruz, Héctor Lavoe, Willie Colón, Ray Barretto, La Lupe, Ruben Blades and the Fania All Stars, to name just a few. Renowned imprints with catalogs issued under the Craft banner include Musart, Fania, TH, Panart, West Side Latino and Kubaney, among many others. Craft creates thoughtfully curated packages, with a meticulous devotion to quality and a commitment to preservation, ensuring that these recordings endure for new generations to discover. Craft Latino is the Latin repertoire arm of Craft Recordings. For more info, visit CraftRecordings.com and follow on Facebook, Twitter, and Instagram.