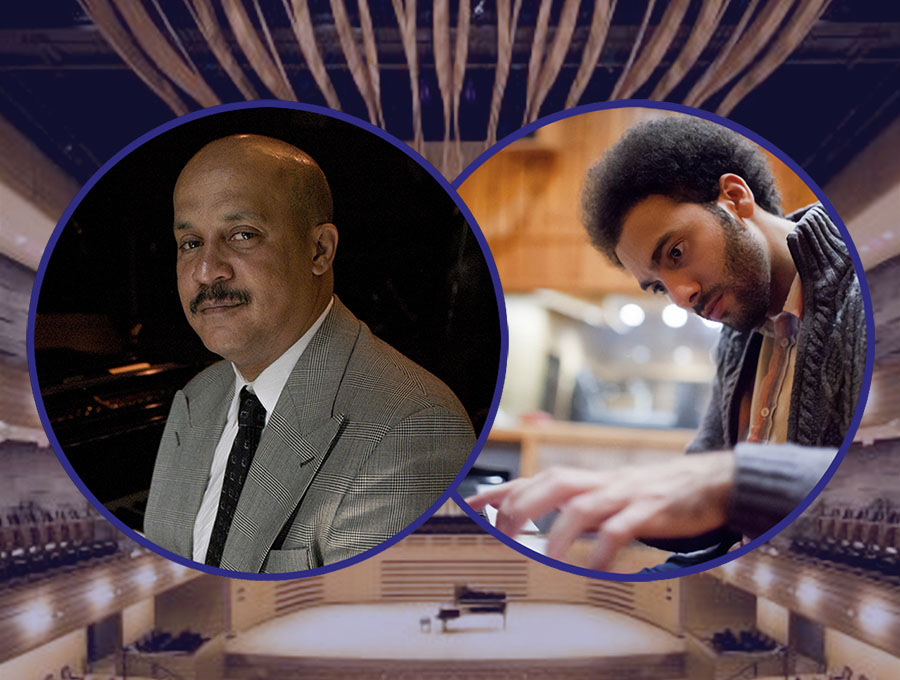 Front Street Duets, set for release on ALMA Records on November 4 (October 14 in Canada), is a compelling collaboration of two internationally acclaimed Cuban jazz pianists and composers, Hilario Durán and David Virelles. This collection of piano duets features the virtuosic playing of two musicians in peak form. Durán and Virelles have a musical and personal relationship dating back over two decades, but this is their most extensive project to date.

The Toronto-based Durán is a towering figure in Cuban music. Over a career now spanning over 45 years, he has won three Juno Awards and earned a Grammy nomination (for 2006’s From the Heart, by Hilario Durán and his Latin Big Band). His extensive discography includes work as a solo artist, and in duo, small group and big band settings, and he has also achieved distinction in the classical and chamber music worlds.

Now based in New York City after a stint in Toronto, Virelles records as a solo artist for such labels as ECM and Pi Recordings. He has collaborated extensively with such noted musicians as Andrew Cyrille, Bill Frisell, Henry Threadgill, Steve Coleman, and Ravi Coltrane, and last year he won the prestigious Herb Alpert Awards in the Arts.

When ALMA head and album producer Peter Cardinali presented the concept to Durán and Virelles a couple of years ago, both instantly agreed. “This album is very special because I had the privilege to work with David,” Durán explains. “He is the most important Cuban piano player of this new generation, and now he has so much success in the New York City scene, playing with great jazz stars and doing his own projects.”

Thirty years Hilario’s junior, Virelles had long admired Durán’s music. “Growing up in Santiago de Cuba, I knew of him, and then I was introduced to a lot of his records that weren’t available in Cuba through my Toronto friends Jane Bunnett and Roberto Occhipinti.

“As a bandleader, arranger, composer, and pianist, Hilario’s sophistication as a musician is unparalleled and that is something I’ve tried to emulate,” Virelles says. “He has always been a reference point for me and for so many young Cuban musicians. When he asked me to do this I was like, ‘this is perfect!’”

The album is a carefully curated collection of material that features new arrangements by both of traditional Cuban material, original compositions written by Hilario specifically for the project, and a fresh take on a much-loved standard, “Body and Soul.”

Durán says “most piano duets by jazz players come from improvisation, where they make it up in the moment. We have that here, but also a lot of complex arrangements we both contributed.” Both pianists are masterful improvisers, and Durán notes that “having the same background with and knowledge of Cuban music is a great foundation. It is like we have the same musical blood in our veins! It was almost mental telepathy, as we were very aware of each other in the cues and where we were going.” Virelles concurs, noting that “the music we grew up with from the country we share is part of our collective consciousness.”

The resulting album is both musically sophisticated and melodically attractive, and the compositions have a pleasing variety of tempos and tones. Arranged by Virelles, the breezy and bright “La Malanga” has a tropical vibe that can transports the listener to a Cuban beach, while “Santos Suarez’s Memories” is a reflective piece written by Hilario as an homage to the Havana ‘hood he lived in. Another Durán composition inspired by Havana is “Milonga For Cuba,” dedicated to those protesting in the city last summer.

The meditative “Danza Lucumi” features a Virelles arrangement of a tune from his Santiago de Cuba region, while “Guajira For Two Pianos” is a spirited piece featuring shifting rhythms.

“David’s Tumbao” is a thrillingly dynamic tune written by Durán for Virelles in the tumbao form with which Hilario is closely associated (his nickname, ‘Con Tumbao’ inspired the title of his acclaimed 2017 album). “I wrote it when we started the project, as the pandemic started,” Durán says. “David and I decided to put this together and record it online. We then put it online and people went crazy for it, and I think the finished version came out wonderfully.”

It is fitting that a studio/theatre space named for the iconic Canadian classical pianist Glenn Gould was employed for the making of an album by two other piano virtuosi. Both Durán and Virelles have a fond earlier memory of the space, as in Oct. 2008, as part of a special celebration of Glenn Gould, each performed original compositions (some inspired by Gould), accompanied by the acclaimed Penderecki String Quartet.

One noted musician with a unique perspective on this exciting collaboration is Juno-winning, Grammy-nominated jazz composer/ instrumentalist/bandleader Jane Bunnett. She explains that “I have had the gift of being able to collaborate deeply with both of these masters for many years and many projects. To see these two visionaries and virtuosos go head-to-head on this marvelous recording gives me inspiration and a profound sense of joy.”

Musical joy does indeed await you with – Front Street Duets.