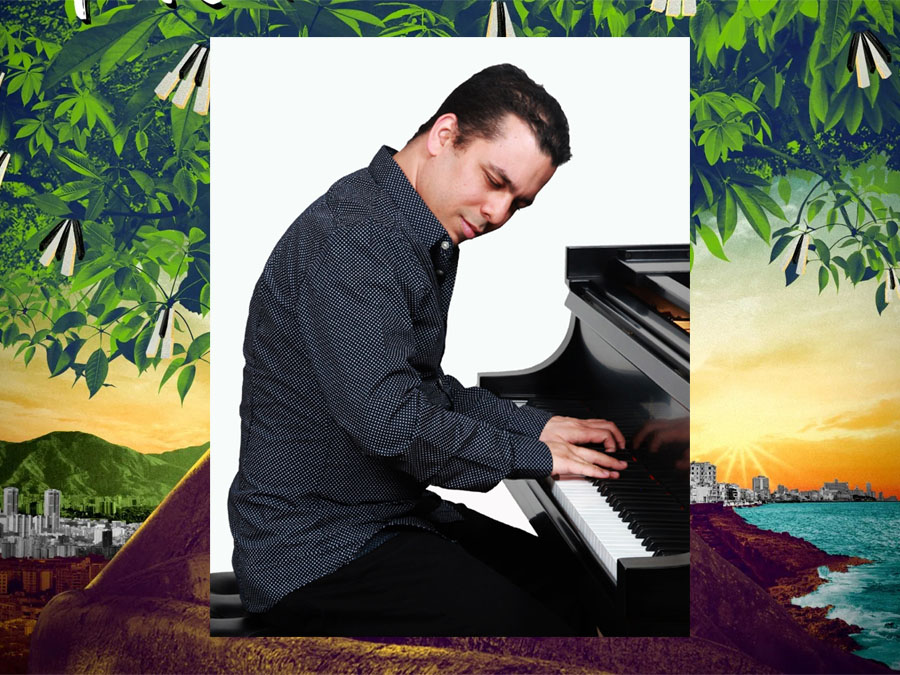 Co-Producers César Orozco and Rodner Padilla are thrilled to announce the October 16, 2020 release of Rooted Forward, the fourth album from César Orozco and Kamarata Jazz. A pianist, composer, arranger, and educator (who just so happens to be a classically trained violinist, too!), Orozco has always celebrated the rich musical traditions of Cuba and Venezuela, the two places that most greatly informed his musical education and upbringing. Rooted Forward continues to honor those musical legacies but also showcases more of Orozco’s compositional prowess than has been on display to this point.

“When I started to plan the album during the summer of 2019,” Orozco said, “I thought it was time to do an album that could showcase my composer and arranger side a little bit more than I had on the previous ones.”

To that end, of Rooted Forward’s nine cuts, eight are originals, with seven written by Orozco and the title track by his right-hand man and Kamarata Jazz’s electric bassist, Padilla.

While the album is rooted in traditional rhythms and genres from Venezuela and Cuba like danzón, son, chachachá, joropo, Venezuelan waltz and merengue, and Afro-Cuban/Venezuelan music, it also includes contemporary harmonies, melodies, odd meters, improvisation, and unusual instrumentations—creating a sound that moves forward despite the root elements present in each tune.

Hence, the album’s ostensibly contradictory title. That’s what you realize when you listen to the album—nothing happens by accident, there are only those incongruities which Orozco has cleverly and purposely orchestrated, though by no means does the music ever want for improvisational brio.

The next two cuts, “Como Dice Danilo” and “Chacha Para Purri” are for Orozco’s father and mother, respectively—the first tunes, Orozco said, that he’s ever written for his parents. The one for his dad Danilo, who’s considered to be one of the most respected musicologists in all of Latin America, is a mix of Cuban son and danzón, featuring Marcial Istúriz on lead vocals and Zamira Briceño and David Alastre backing him up. Roberts, on soprano saxophone here, plays beautifully in unison with Orozco in the composition’s first half, then shines brightly as a soloist in the hip-shaking second half.

Though his mother is not a musician by trade, but rather a dentist, Orozco touts her intuitive sense for music and “impressive ear,” and is careful not to disappoint her with a languid, flowing chachachá in 7/4 that notably showcases two impressive runs on soprano saxophone from Orta.

The title track is next, fusing elements of Venezuelan joropo with popular elements of flamenco music. Troy Roberts is featured once again, marking his first appearance on tenor sax with a solo of gradually escalating fury matched only by Alvarez’s turns on the cajón.

Roberts and his tenor saxophone return on “Spiral City,” a recursive, delirium-inducing tune that, like the city to which it is dedicated—New York City—is at times disorienting but brimming with transcendent talent. Combined with the next track, “Volao Rumba,” a guaguancó written in 7/4, this two-tune section, says Orozco, constitutes the album’s most musically complex.

Equally if not more important to Orozco is another place, where the pace is less frenetic but the culture no less musically rich. It’s Venezuela, a country Orozco considers his second homeland. And for it, he’s written “Tierra Valiente”—‘brave land’— a peaceful and melodic waltz with hints of Chick Corea-type phrasing that is, at once, wistful, melancholic, and hopeful.

“Sueño y Anhelo,” the only non-original on the album, is a polo Margariteño, a traditional folk song from eastern Venezuela that seems to build an entire world and tell its entire story all within six-and-a-half minutes. After an ethereal first instrumental act, Natasha Bravo sings lead vocals and is accompanied poignantly by Orozco and Glem.

Orozco ratchets the energy all the way back up for the closer, “Con Mi Tambor,” which could just as reasonably translate into ‘the musical anti-depressant’ as ‘with my drum.’ A Cuban guaguancó suffused with Afro-Venezuelan rhythm featuring brilliant solo work, once again, from Troy Roberts and the indispensable percussive stylings of Fran Vielma, 14 of the album’s 17 musicians return back to the bandstand here for this rollicking finale, where Orozco’s ebullient vocal soneos serve as a decisive exclamation point.

With Rooted Forward, César Orozco and Kamarata Jazz prove that a heart for tradition and a head for innovation are not irreconcilable musically. Orozco puts it thusly: “The old and beautiful tree of your garden which has long and deep roots growing down, suddenly starts giving you a new, delicious and different type of ‘fruit’ because of a special ‘fertilizer’ you started using to take care of it. The tree has evolved to a new kind of tree, one that will continue to surprise you even more in the future with lots of new and different fruits.”