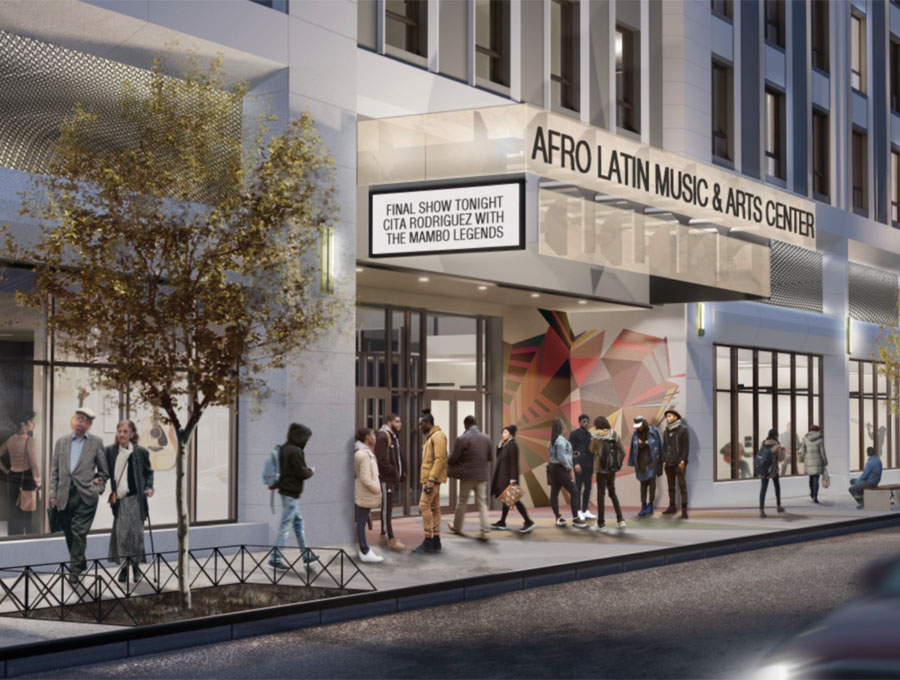 “East Harlem is the community that best represents the mission of the Afro Latin Jazz Alliance, to use music as an entry point for service to the community and to reflect back to that community the beauty and ingenuity of its citizens,” comments Arturo O’Farrill, Founder, Artistic Director, Afro Latin Jazz Alliance. “Partnering with the City of New York, the Lantern Organization and Mega Development is an opportunity to put theory into daily practice. We are honored to lock arms with these partners and serve the people of East Harlem in a manner designed by their needs. Timbale Terrace will be a place that welcomes all!”

“We feel that this is a historic moment for New York: to witness the creative connection between affordable housing and the performing arts in a way that enhances the life of people in our communities and specifically in East Harlem,” adds Marietta Ulacia, Executive Director, ALJA. “The Afro Latin Jazz Alliance, in partnership with Lantern organization and Mega Development, is uniquely positioned to develop the first performing arts center dedicated to Afro Latin music and arts in East Harlem. ALJA’s commitment to free educational programs, music performances, community engagement, and offering a recording studio, archival library, and café will be placed at the service of the community for the benefit of everyone.”

“ALJA is very excited to be an integral part of the Timbale Terrace development to create a vibrant project that will be a resource for the entire East Harlem community,” says James R. Wacht, President of Sierra Real Estate, ALJA board member and Head of the Education Committee. “This project will allow the Afro Latin Jazz Alliance to expand our performance and educational programming, which currently enriches over 1,000 elementary, middle and high school students in underserved NYC public schools. Our Fat Cat youth ensembles will now have a permanent home that will enable us to attract an even more diverse and talented group of middle and high schoolers. The theater will become the new home for our seven-time, GRAMMY Award-winning Arturo O’Farrill and the Afro Latin Jazz Orchestra that has been performing at Birdland for the past 25 years.”

For nearly two decades, the Afro Latin Jazz Alliance has served as a leading New York City cultural institution preserving the music and heritage of Afro Latin jazz. The opening of their very own Afro Latin Music & Arts Center affords an opportunity to advance a wider range of innovative Latin jazz programs to diverse communities across the metro area. Timbale Terrace consolidates and expands ALJA’s varied initiatives offering comprehensive support to their close network of standout musicians and educators in the form of live performances, educational teaching ventures, individual artist grants, and an ability to participate in a citywide lottery for apartments at Timbale Terrace. 50% of the affordable units will be given a community preference status for residents who live in East Harlem (or served by the Community Board district of the project, Manhattan CB #11). Many teaching artists and musicians (with or without families) will qualify as Timbale Terrace applicants based on their household income.

Along with Lantern Organization and Mega Development, ALJA is eager to work with essential local arts and cultural groups such as Art For Change, the Association of Hispanic Arts, El Museo del Barrio, La Casa de la Herencia Cultural Puertorriqueña, Speaking In Rhythms, Taller Boricua PR Workshop, and many others.

ALJA’s outstanding contributions to the arts and cultural sectors of New York City ensures that Latin jazz will be kept alive and well for generations to come to enjoy.
For more information regarding ALJA, please visit: afrolatinjazz.org

About Arturo O’Farrill and the Afro Latin Jazz Orchestra

GRAMMY Award winning pianist, composer and educator Arturo O’Farrill — leader of the “first family of Afro-Cuban Jazz” (New York Times) — was born in Mexico and grew up in New York City. Son of the late, great composer Chico O’Farrill, Arturo played piano in Carla Bley’s Big Band from 1979 through 1983 and earned a reputation as a soloist in groups led by Dizzy Gillespie, Steve Turre, Freddy Cole, Lester Bowie, Wynton Marsalis and Harry Belafonte. In 2002, he established the GRAMMY® winning Afro Latin Jazz Orchestra in order to bring the vital musical traditions of Afro Latin jazz to a wider general audience, and to greatly expand the contemporary Latin jazz big band repertoire through commissions to artists across a wide stylistic and geographic range.

Following his 2009 GRAMMY® Award for “Best Latin Jazz Album” for the Orchestra’s debut recording, Song for Chico (ZOHO), O’Farrill has received numerous GRAMMY® wins for The Offense of the Drum (“Best Latin Jazz Album”), Cuba: The Conversation Continues (“The Afro Latin Jazz Suite,” “Best Instrumental Composition”), his album with Chucho Valdés, Familia: Tribute to Bebo & Chico, won a GRAMMY® Award in the “Best Instrumental Composition” category for his composition, “Three Revolutions,” and Cuba: The Conversation Continues won a 2016 Latin GRAMMY® for “Best Latin Jazz Album.” This past March 2021, O’Farrill and the Afro Latin Jazz Orchestra won their 7th GRAMMY® for Four Questions, with Cornel West as guest orator. September 2018, O’Farrill released his album, Fandango at the Wall: A Soundtrack for the United States, Mexico, and Beyond, featuring the Afro Latin Jazz Orchestra, Antonio Sanchez, Regina Carter, Akua Dixon, Mandy Gonzalez, Patricio Hidalgo, Rahim AlHaj, and Ramón Gutiérrez Hernández. This was also released as a documentary for HBO MAX called Fandango at the Wall.

In 2019, O’Farrill was appointed Professor at The UCLA Herb Alpert School of Music in the Global Jazz Studies department and is currently the Associate Dean for Equity, Diversity and Inclusion. O’Farrill is a Steinway Artist and records for Blue Note Records.

The non-profit Afro Latin Jazz Alliance (ALJA) was established by Arturo O’Farrill in 2007 to promote Afro Latin Jazz through a comprehensive array of performance and education programs. ALJA’s mission is to perform, educate about, and preserve the music of all of the Americas, emanating from African and indigenous roots, through the entry point of jazz. ALJA embraces its mission with a commitment to social justice, equity, inclusion, and the equality of all cultures worldwide. ALJA produces the Afro Latin Jazz Orchestra’s annual performance season in New York, and maintains a weekly engagement for the Orchestra at the famed jazz club Birdland. The Alliance also maintains a world-class collection of Latin jazz musical scores and recordings. ALJA’s education programs include the Afro Latin Jazz Academy of Music (ALJAM), an in-school residency program serving public schools citywide with instrumental and ensemble instruction, the pre-professional youth orchestra; the Fat Afro Latin Jazz Cats, which prepares the next generation of musicians, and the Global Rhythms in Our Tribe (G.R.I.O.T.); a community music program that engages underserved youth in anti-violence activities. The Afro Latin Jazz Alliance maintains administrative offices in Harlem.