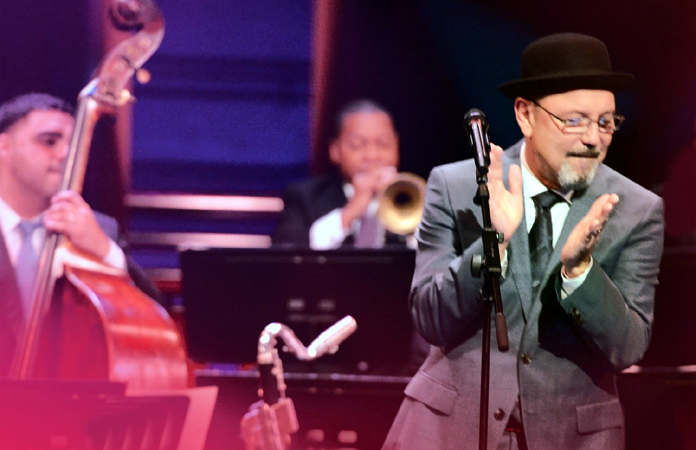 New York, NY – September 7, 2018 – Rubén Blades — the salsa giant and nine-time GRAMMY® Award-winning singer, songwriter, actor, and activist — collaborated with the Jazz at Lincoln Center Orchestra with Wynton Marsalis in 2014 for an extraordinary series of performances on the Jazz at Lincoln Center stage. On these very special style-straddling, Americas-spanning nights, the worlds of salsa and swing collided. Blue Engine Records today announced this historic concert, which the New York Times called “radically beautiful,” will be available as an album release entitled Una Noche con Rubén Blades on October 19, 2018.

Music-directed by Jazz at Lincoln Center Orchestra bassist Carlos Henriquez (called an “emerging master in the Latin jazz idiom” by DownBeat magazine), Una Noche con Rubén Blades features Blades, backed by the Jazz at Lincoln Center Orchestra with Wynton Marsalis, performing Blades’ own beloved compositions, including “Pedro Navaja,” “Patria,” and “El Cantante,” as well as swing-era standards like “Too Close for Comfort” and “Begin the Beguine.”

“I’ve known Rubén Blades since I was two years old—or at least I feel like I have,” Henriquez says. “His albums—and the sound and the warmth they generated–filled my family’s apartment at 146th and Brook Avenue in the Bronx, and his music was one of my earliest influences.”

“Jazz is the story of taking old parts and building something new,” he continues. “When Rubén joined us for our performances at Jazz at Lincoln Center’s Rose Theater, we did exactly that using the Great American Songbook and the Afro-Cuban rhythms that propel all the wonderful music that Rubén sang that evening. The music I arranged for Rubén Blades to perform with the Orchestra sounds like Panama, New Orleans, and New York all mixed into one. Those sounds form the heart of all our stories as musicians, and in combining them we reaffirmed that we’re all in this together.”

The first single from Una Noche con Rubén Blades, “Ban Ban Quere,” is available for streaming and download on all mass-market digital platforms. The album is available for preorder on iTunes and Amazon. Preorders via Jazz at Lincoln Center’s webstore include a deluxe bundle featuring the CD and limited-edition maraca.

*Did not perform at this concert

About Blue Engine Records
Blue Engine Records, Jazz at Lincoln Center’s platform that makes its vast archive of recorded concerts available to jazz audiences everywhere, launched on June 30, 2015. Blue Engine Records releases new studio and live recordings as well as archival recordings from Jazz at Lincoln Center’s performance history that date back to 1987 and are part of the R. Theodore Ammon Archives and Music Library. Since the institution’s founding in 1987, each year’s programming is conceived and developed by Managing and Artistic Director Wynton Marsalis with a vision toward building a comprehensive library of iconic and wide-ranging compositions that, taken together, make up a canon of music. These archives include accurate, complete charts for the compositions – both old and new – performed each season. Coupled with consistently well-executed and recorded music performed by Marsalis and the Jazz at Lincoln Center Orchestra, this archive has grown to include thousands of songs from hundreds of concert dates. The launch of Blue Engine is aligned with Jazz at Lincoln Center’s efforts to cultivate existing jazz fans worldwide and turn new audiences onto jazz. For more information on Blue Engine Records, visit blueenginerecords.org.

Arturo O’Farrill Journeys to the U.S.-Mexico Border on “Fandango at the Wall”