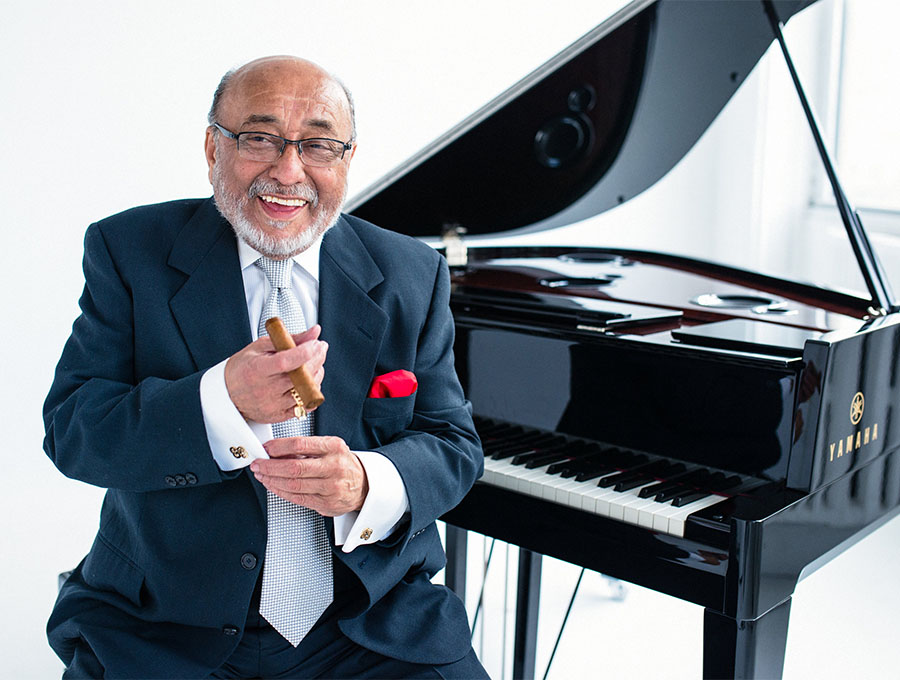 Latin music legend Eddie Palmieri will celebrate his 85th birthday at Birdland Jazz Club next week! Known as one of the finest pianists of the past 60 years, the 8x GRAMMY-award winning bandleader, arranger and composer is one of the most highly-regarded artists of his generation. An NEA Jazz Master, his playing skillfully fuses the rhythm of his Puerto Rican heritage with the complexity of his jazz influences: Thelonious Monk, Herbie Hancock, McCoy Tyner as well as his older brother, Charlie Palmieri. Palmieri will ring in his 85th birthday at Birdland Jazz Club on Tuesday, January 11 through Saturday, January 15.

Palmieri’s parents emigrated from Ponce, Puerto Rico to New York City in 1926. Born in Spanish Harlem and raised in the Bronx, Palmieri learned to play the piano at an early age, and at 13, he joined his uncle’s orchestra, playing timbales. His professional career as a pianist took off with various bands in the early 1950s. In 1961, Palmieri formed his own band, La Perfecta, which featured an unconventional front line of trombones rather than the trumpets customary in Latin orchestras. This created an innovative sound that mixed American jazz into Afro-Caribbean rhythms, surprising critics and fans alike.

His unconventional style would surprise critics and fans with the 1970 release entitled Harlem River Drive. This recording was the first to merge what were categorized as “Black” and “Latin” music into a free-form sound that encompassed elements of salsa, funk, soul and jazz. In 1975, Palmieri won his first of eight GRAMMYS for Best Latin Recording for The Sun of Latin Music.

Palmieri has received numerous honors including Eubie Blake Award (1991); Most Exciting Latin Performance, presented by the BBC in London (2002); Yale University’s Chubb Fellowship, usually reserved for international heads of state, but given to Palmieri in recognition of his work building communities through music (2002); Harlem Renaissance Award (2005); Jay McShann Lifetime Achievement Award (2008). In 2009 The Library of Congress added Palmieri’s composition “Azucar Pa’ Ti” to the National Recording Registry, which at the time only included 300 compositions documenting the history of all of recorded music history in the U.S. He was also recognized as an American icon in 1988 by the Smithsonian’s National Museum of American History in Washington, DC, as they recorded two of Palmieri’s performances for its archives.

In 2013, Eddie Palmieri was awarded the coveted Jazz Master award by the National Endowment of the Arts (NEA). The NEA Jazz Master award is the highest honor an American Jazz artist can receive. He was also granted a lifetime Achievement Award by the Latin Academy of Recording Arts & Sciences.

In 2017, Palmieri recorded a big band album entitled Mi Luz Mayor, which features Carlos Santana and Gilberto Santa Rosa. In the Spring of that year, he released Sabiduria/Wisdom, followed by Full Circle.

Birdland is located at 315 W 44th St #5402, New York, NY 10036. Birdland is a fully vaccinated venue and in compliance with New York City rules for indoor activities, requires proof of vaccination from all customers, staff, and performers.