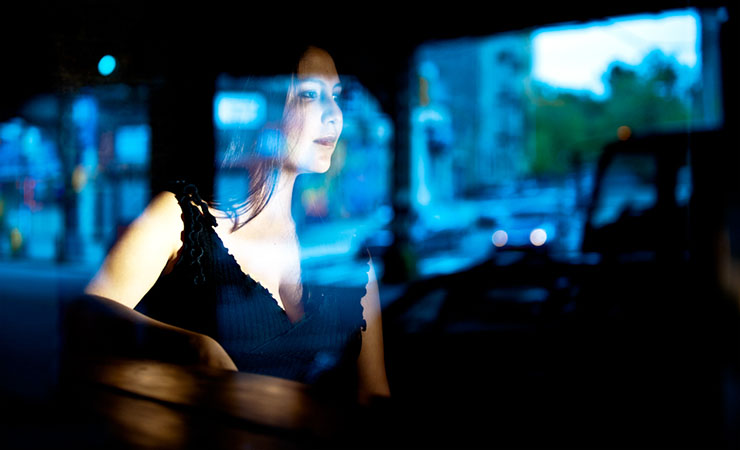 The rhythms of Latin America have been familiar to jazz since the music’s inception. The “Spanish tinge” has become more than just that over the past four or five decades, however. Many musicians hailing from countries south have been settling in the United States and making an indelible mark on jazz by incorporating musical elements from their native homes.

One such pioneer is Carolina Calvache. Originally from Cali, Colombia, this exceptional young pianist/composer left her home to study and play with the best musicians in jazz by relocating to the States. Calvache announces herself to the jazz world with her debut recording, Sotareño, a collection of songs that are at once a part of the jazz tradition but also relate to her roots in Colombia.

Cali, Colombia is a town more known for its love of salsa than for jazz. Calvache’s infatuation with music began early and, at the age of six, she began her study at the city’s Music Conservatory. Calvache became more and more appreciative of jazz as she grew. She began rigorous study of music, learning to classical piano, counterpoint and classical composition while attending jazz workshops in Bogotá. It was at this time that she realized that she would have to look elsewhere if she was to progress further.

The University of North Texas was the next stop in Calvache’s journey. It was there that she was able to hone her skills, including big band writing, and even met some future collaborators, including Antonio Sánchez. A number of the compositions on Sotareño were written while she lived in Denton, Texas.

It was during a vacation in New York that Calvache decided that she would relocate to the Big Apple, which she did in January 2011. On the same trip, Calvache tracked down the fabulous Venezuelan pianist Luis Perdomo, whom she befriended and who would help introduce her to a number of the performers that she would assemble for her debut recording.

Perdomo introduced Calvache to saxophonist Jaleel Shaw, as she had been looking for a strong saxophonist who possessed great rhythmic command. Bassist Hans Glawischnig had been the longtime bassist with Perdomo and was naturally suited for Calvache’s Colombian inspired rhythms. The tremendous trumpeter Michael Rodriguez and drummer Ludwig Afonso had been longtime friends with whom Calvache had developed a strong musical rapport.

The recording begins with an arrangement of the beloved folkloric piece “El Sotareño,” written about a man from the town Sotará in the mountainous region of Cauca, Colombia where Calvache’s father came from. Calvache grew up listening to this piece, along with many other folkloric songs, so she decided to arrange the piece for jazz quartet keeping the melody untouched while she enhanced the rhythmic and harmonic qualities. Enlisted to play on “El Sotareño,” guest drummer Antonio Sánchez fit in well because of the similar rhythms he grew up playing in his native Mexico.

The subtle “Stella” is a tribute to Calvache’s mother in a tender trio ballad, while the shifty “Lluvia” is a captivating listen as the players strike a balance between gale and sprinkle on this rain inspired composition. “Melodia Triste” is a waltz-like piece originally written for guitar and flute by the Colombian folkloric composer León Cardona. Calvache adapts the piece into 7/4 time and showcases the great Jaleel Shaw on alto. Inspired by hearing Luis Perdomo at a gig upon arriving in New York, Calvache wrote the energetic “Monday,” another tricky composition in a more straight ahead vibe boasting the writer’s fantastic work with strong rhythms.

The somber “Too Soon” is a tribute to the late, great Bob Brookmeyer, who Calvache studied intensely. Though originally written for big band, the tune is now a stripped down feature for the striking trumpet of Rodriguez. The trio sparkles on the spirited “Dream Maker,” a tribute to Calvache’s father. “Melancholia” is as somber as the title suggests led by the lilting soprano sax of Shaw, while “Te Agradezco” is an introspective salute to a friend that Calvache originally wrote for solo classical piano and had published in a collection of Colombian compositions. The recording concludes with a wistful solo take on “El Sotareño.”

Carolina Calvache is an inspired composer and performer. Her pieces and arrangements show her appreciation of a great melody and a focus on rhythm. Calvache’s new recording Sotareño is a moving exploration of the pianist’s eclectic musical identity.

Omar Sosa In Concert At The Blue Note