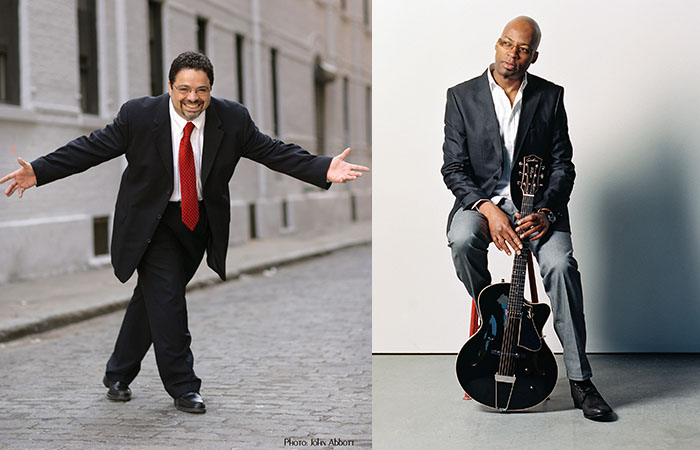 Following a monumental trip to Havana, Cuba (Dec. 16 – 22, 2014) while the Obama administration made their historic announcement regarding renewed diplomatic relations between the US and Cuba, GRAMMY® Award-winners Arturo O’Farrill and the Afro Latin Jazz Orchestra (ALJO) return to New York City after the full orchestra’s debut appearance at the Havana International Jazz Festival and their recording sessions with Cuba’s premier composers for O’Farrill’s new album, Cuba: The Conversation Continues (May 2015). Now stateside, ALJO is thrilled to return to the Symphony Space stage for An Evening with Lionel Loueke on January 30 & 31, 2015. Presenting the show is O’Farrill’s nonprofit, The Afro Latin Jazz Alliance, a proud visiting presenter at Symphony Space. Interviews and hi-res photos are available upon request.

One of the New Year’s most-anticipated music collaborations, O’Farrill teams up with Benin-born artist Lionel Loueke to present big band arrangements of select works from the celebrated guitarist’s catalogue. Loueke has been widely praised for his fusion of traditional West African music with modern jazz harmonies, unique vocal inflections, and complex time signatures. O’Farrill notes, “Lionel is a tour de force. His performances are incredibly powerful and he plays the music of the cosmos. The sounds he gets from his guitar, how he sings, and what he does with his presentation, it’s not to be believed. We are extremely excited to be working with him.”

O’Farrill adds, “We purposely put Afro in the Alliance’s name because we know that Africa is the source for all our music. In our programs, we seek to connect back to Africa as it is the foundation that nourishes both our work and our very souls.”

Lionel Loueke comments, “I am very excited to be a special guest of Arturo O’Farrill and the Afro Latin Jazz Orchestra. It is going to be an honor to share my music with Arturo, whom I consider a very inventive composer, arranger and talented conductor. Although Latin & African music are similarly percussive genres, they are very unique at the same time. It’s going to be amazing to combine the two and make them speak together, thanks to the talent of Arturo.”

About Arturo O’Farrill and the Afro Latin Jazz Orchestra
Grammy Award winning pianist, composer and educator Arturo O’Farrill — leader of the “first family of Afro-Cuban Jazz” (New York Times) — was born in Mexico and grew up in New York City. Son of the late, great composer Chico O’Farrill, Arturo was Educated at Manhattan School of Music, Brooklyn College Conservatory and the Aaron Copland School of Music at Queens College. He played piano in Carla Bley’s Big Band from 1979 through 1983 and earned a reputation as a soloist in groups led by Dizzy Gillespie, Steve Turre, Freddy Cole, Lester Bowie, Wynton Marsalis and Harry Belafonte. In 2002, he established the GRAMMY winning Afro Latin Jazz Orchestra in order to bring the vital musical traditions of Afro Latin jazz to a wider general audience, and to greatly expand the contemporary Latin jazz big band repertoire through commissions to artists across a wide stylistic and geographic range.

An acclaimed composer with a frequent new ground-breaking and forward-looking perspective, Mr. O’Farrill has received commissions from Meet the Composer, the Big Apple Circus, the Philadelphia Music Project, Symphony Space, and the Bronx Museum of the Arts. He has also composed music for films, including Hollywoodland and Salud. His debut album with the Orchestra, Una Noche Inolvidable, earned a GRAMMY Award nomination in 2006 and the Orchestra’s second album, Song for Chico, (ZOHO) earned a GRAMMY Award for Best Latin Jazz Album in 2009. In February 2011, Mr. O’Farrill and the ALJO released their third GRAMMY nominated album, 40 Acres and a Burro (ZOHO). In 2011, O’Farrill released his first solo album, The Noguchi Sessions, (ZOHO). On May 6, 2014, O’Farrill and the Afro Latin Jazz Orchestra released their latest album, The Offense of the Drum, on Motéma Music.

Arturo O’Farrill is an artist in residence at Harlem School of the Arts and Casita Maria Center for Arts & Culture, and on the faculty of Brooklyn College and the Manhattan School of Music. He’s currently collaborating with director Moises Kaufman and the Tectonic Theater on an Afro Cuban version of Bizet’s opera, Carmen. He is also a member of the Board of Governors of the New York Chapter of NARAS, and is a Steinway Artist.