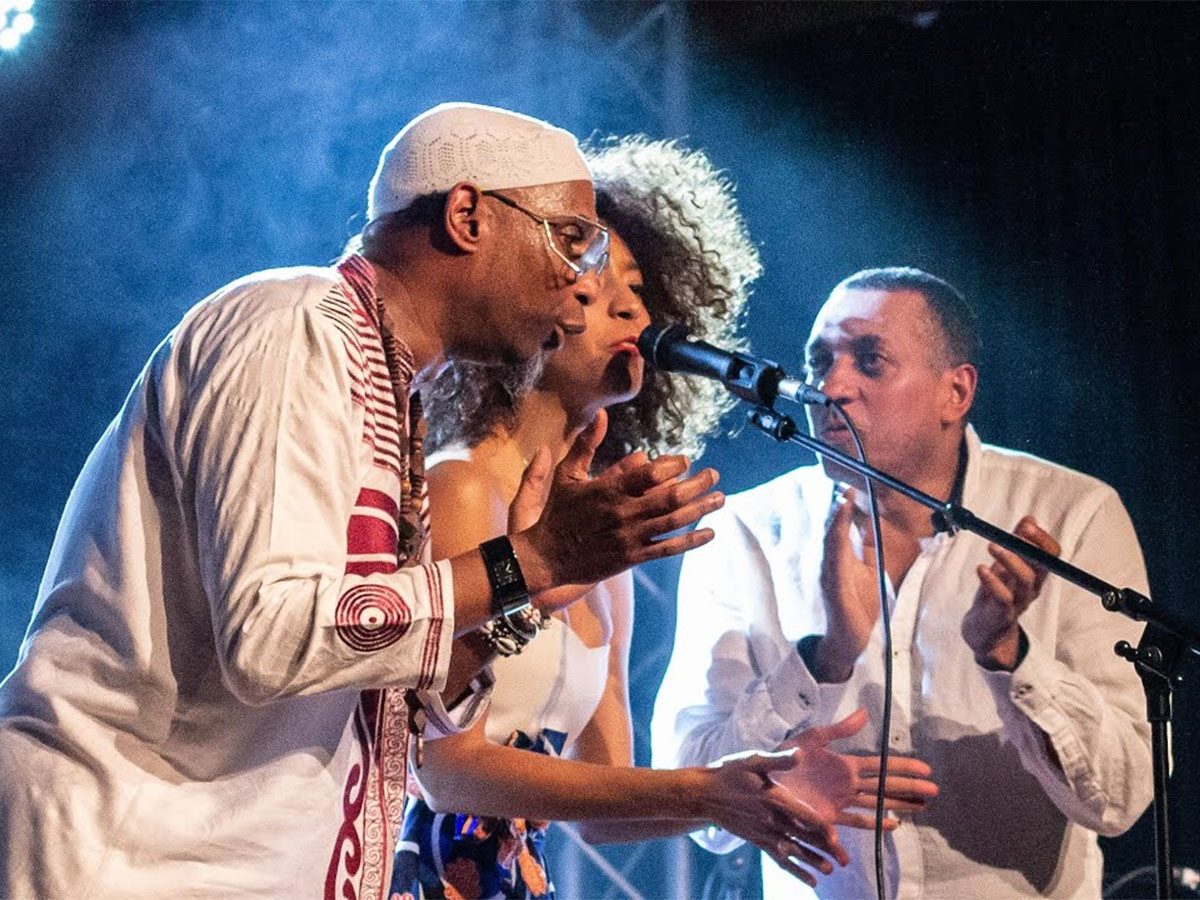 Omar Sosa knows how to make an entrance. Wearing a white kaftan, matching skull cap, and adorned with a Santeria collare (collar) and bracelets on his wrists and ankles, he cleanses the room as the Cuban violinist, singer Yilian Cañizares and the Venezuelan percussionist, Gustavo Ovalles join him onstage. After a moment of silence, the magic begins.

The Aguas Trio dedicates itself to Water and Oshún, the Goddess of Love, and the Mistress of the rivers in the Lucumi tradition. “It’s a tribute to our traditions, our ancestors, and one of the most important elements of the planet, WATER.” Interestingly, the music was created on the Mediterranean island of Mallorca, by the sea.

Sosa is a nomad, a citizen of the world. He was born in 1965 in Camagüey, Cuba. At eight, he gravitated to percussion and marimba at the music conservatory in Camagüey. In Havana as a teenager, he took up piano at the prestigious Escuela Nacional de Música and completed his formal education at the Instituto Superior de Arte in Havana. In 1993, he moved to Ecuador and immersed himself in the folkloric traditions of Esmeraldas, whose heritage includes the Afro-Ecuadorian marimba tradition. Two years later, he relocated to the San Francisco Bay area, and singlehandedly invigorated the Latin Jazz scene.

Since then, he’s been traveling the globe and recruiting like-minded artists along the way. “I remember seeing Yilian play for the first time. I fell in love with her passion, her talent, her voice, the way she plays the violin, and her stage presence. I thought to myself, it’s an excellent time to put together two generations of Cubans living outside of the U.S. and express what we think, feel and live through the music.” Sosa and Ovalles have worked together on various projects since 2003.

At Birdland Jazz Club (February 18 to 22, 2020), the Trio went beyond the parameters of a standard set and took the audience on a journey. Highpoints included “Duo de Aguas,” which highlighted the extraordinary synergy between Sosa and Cañizares and their virtuosity. Also, the nostalgic crowd-pleaser, “De La Habana y Otras Nostalgias,” featuring Ovalles on several Venezuelan percussion instruments including quitiplas, culo’e puya, and maracas. Also, the tune, “Oshún,” whose traditional lyrics and original melodies embodied the deity’s “sweetness.”

I’ve been covering Sosa since 2004 when he was in New York for the making of “Mulatos.” Since then, I’ve had the pleasure of watching him perform and conquer audiences in every scenario imaginable: solo, duo, trio, quartet, and with a large ensemble.

Between sets, I made my way backstage with the idea of gaining insight into the Trio’s creative process and upcoming tour. Instead, I fell prey to Sosa’s quirky sense of humor and philosophy surrounding food. Namely, “Good food creates good music! “We rarely talk about music,” added Cañizares. “We would rather talk about food!”

In a previous interview with the website, Rhythm Passport, Sosa summed up his philosophy. “If I had to describe my sound, I always say I’m a musician (citizen) of the world. Music is my way of expressing what I feel inside and what I see in front of me. Over the years, I’ve lived in different parts of the world and in different countries. Like they say in Spanish, ‘Yo soy un músico de la tierra,’ (I am a musician of the earth). For me, it’s important to create music that translates what the spirits and ancestors tell me (Omar is a Santeria follower). Then, it’s about sharing my traditions and heritage with different musicians from the whole planet.”

Kudos to Birdland for the 5-night residency, ambiance, friendly service, and good vibes. As I write this, The Aguas Trio is wrapping up a U.S. Tour and making its way to Europe.