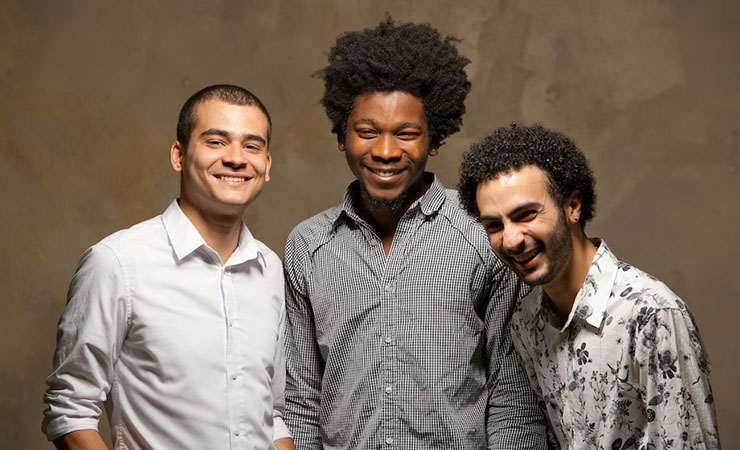 The Bridge Trio has its roots deeply entrenched in the New Orleans Jazz tradition. Drummer Joe Dyson, pianist Conun Pappas, and bassist Max Moran came together as a group at the New Orleans Center for the Creative Arts (NOCCA) under the direction of their mentor and former teacher, the legendary clarinetist and jazz educator Alvin Batiste. These young musicians performed with Batiste as the Jazztronauts while still in high school and played with him on his last gig. Their stirring musical tribute of his music at the New Orleans Jazz and Heritage Festival in 2007, on the day of his passing, is regarded by many as one of the most moving performances in the festivals’ history.

The trio today enjoys increasing professional recognition and success in the jazz world as members of saxophone master Donald Harrison’s band. All three are composers of innovative, original compositions in the “Nouveau Swing” style, a style of jazz created by Donald Harrison that merges modern dance music like r&b, hip-hop, soul, rock, and jazz with Afro-New Orleans traditional music.

They have performed on the international stage in prestigious festivals, performance halls and nightclubs in places such as Paris, Morocco, St. Croix, French Guiana, Brazil, Spain, Greece, Los Angeles, Chicago, New York and many others and have been featured performers in David Simon’s hit HBO series “Treme”. Each are graduates of two of the country’s most distinguished music schools; Joe Dyson and Max Moran received degrees from Berklee College of Music in Boston and Conun Pappas is a graduate of The New School for Jazz and Contemporary Music in New York City. They are a very unique trio of young musicians who stand strong as members of the next line of jazz virtuosos to come out of the thriving music traditions of New Orleans.