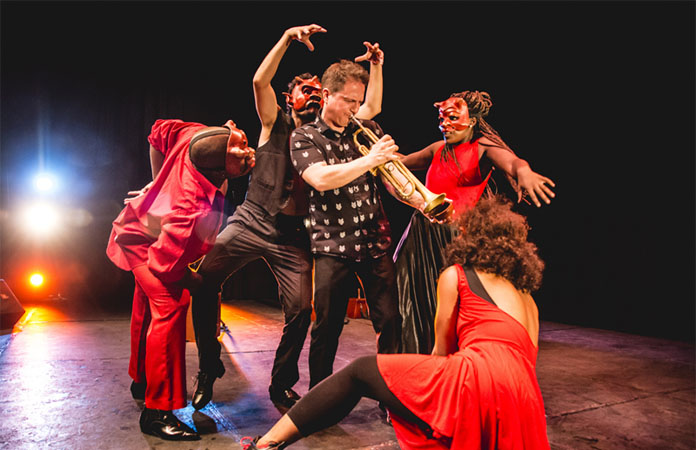 For over a decade, trumpeter, composer, bandleader Gabriel Alegria and the Afro-Peruvian Sextet have presented Afro-Peruvian jazz music to audiences through their recordings and live performances. On their sixth and most adventurous effort to date, titled Diablo en Brooklyn (Devil in Brooklyn) the ensemble cleverly combines two traditions that, seemingly are worlds apart.

“This is a conceptual and very visual album,” says Gabriel. “Also, it’s an opportunity to bring together two parts of my life: living in South Brooklyn and Lima, Peru. The ‘Son de los Diablos’ tradition, where mock devils parade down the streets of Lima combine with the bass driven sounds of ‘speakers on wheels,’ and in my imagination, the devils take over!” 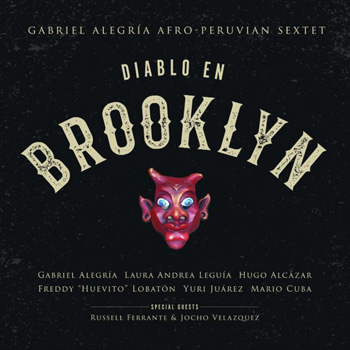 At the core of the album is the intriguing four-part “Brooklyn Suite.” Also included are three original compositions: “Buscando a Huevito,” “El Norte” and the hit-single, “Summertime.”

Gabriel Alegria was born in Lima, Peru. His grandfather, Ciro Alegria, was a renowned novelist who spent time in exile in Cuba and Chile because of his political views. His father, Alonso Alegria, is a prominent playwright and theater director. “My dad is so humble that I never knew he was famous when I was a kid,” says Gabriel. “I thought it was normal to fly to New York to see plays like “Crossing Niagara.” My father’s work is positive and so is mine. It’s all about making people happy.”

He developed the concept of Afro-Peruvian jazz during the five years he spent as a member of the Lima Philharmonic and participated in side gigs in jazz and rock bands. In 2005, while completing a Ph.D. in jazz studies at USC, Gabriel formed his first sextet and recorded the Afro-Peruvian’s Sextet’s debut album titled, “Nuevo Mundo.”

In, what promises to be a rare and historic event, Gabriel and the Afro-Peruvian Sextet will celebrate the release of Diablo en Brooklyn at Roulette. Also, the ensemble will be joined by the pianist, Arturo O’ Farrill and direct from Lima, dancers Graciela Bramon, Javier Barrera, and Wendy Cotito, with choreography by Antonio Vilchez.

“We want the authentic power and sincerity of the ‘Son de los Diablos’ tradition to come through. Also, the staging integrates musicians and dancers in a way that I have not seen before. It’s a true ‘takeover’ of Brooklyn by the devils!”

On a broader scale, Diablo en Brooklyn represents what Afro-Peruvian jazz music and a bicultural ensemble can contribute to the world.

Also, the Sextet and dancers will perform two nights at De Pauw University, Greencastle IN on Wednesday 10/25 and Thursday 10/26.

The Afro-Peruvian Sextet will perform at Merriman’s Playhouse, South Bend, IN on Friday 10/27; Saturday 10/28 at the Bop Stop, Cleveland and Sunday 10/29 at the Erie, PA Art Museum