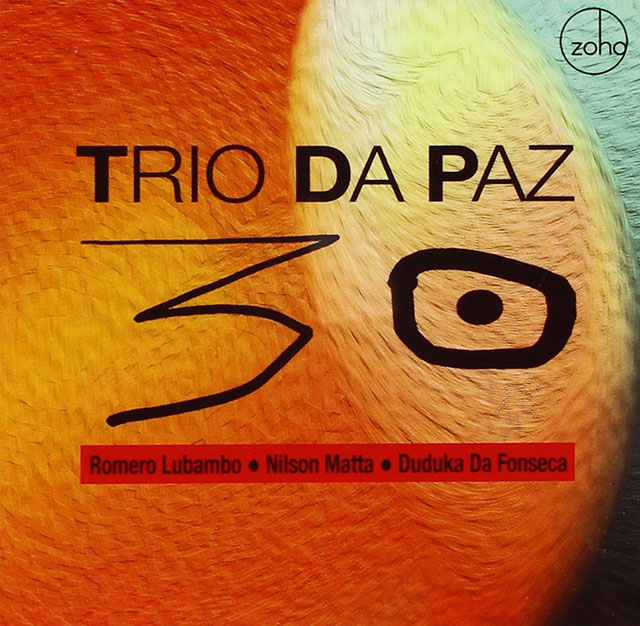 This is the quintessential Brasilian trio, a power trio if ever there was one, featuring Romero Lubambo, Nilson Matta and Duduka Da Fonseca. The guitarist, bassist and drummer can lay claim to being Brasil’s finest exports to the US. As a trio they have overwhelmed the hearts and minds of audiences all over the States and, if they travelled far and wide, the world as well. In their individual capacities each musician has built a career for himself that is the envy of many of their contemporaries. Together they are a formidable force, playing with energy, imagination and almost telepathic integrity. But 30 is their first release on the iconic label ZOHO Music in three decades.

Over these 30 years Trio Da Paz completed several albums whose differences encapsulate the formidable extension of their music over time. The ten works on this disc written against a background of Brasilian samba and bossa nova are formidable in their technical and expressive assurance. They explode the cultural complacencies endemic in contemporary Brasilian music and all of the repertoire glows with commitment, befitting as it does, the excellence and towering interpretation of what is typical of the idioms. Key passages in Baden Powell’s Samba Triste, for instance, feature superlative performances not only by Lubambo, for whose instrument the piece is best suited, but also for Matta and Da Fonseca, who join in the dancing festivities that Powell imbued the song with.

None of the musicians jostle for attention in any of the pieces on this recording. They play as if they are one nervous system sending precise messages to the brain and from there to hands and fingers to play music with admirably lucid and painstakingly beautiful and magisterial pomp and circumstance. And yet the profound beauty moves with emotional candour that is intrepid and quarries in the music’s hugely powerful attraction. All of the music – except Samba Triste – is original work largely written by Lubambo, with significant contributions by Matta and Da Fonseca. It might seem, therefore, that this is a guitar record, at first blush, but on deeper listening it becomes clear that the bassist and drummer also bask in the great lustre and ambient warmth in what is a judiciously balanced sound picture.

It really doesn’t get any better than this as far as these Brasilian musicians go, or does it? This is a standout performance by three iconic instrumentalists and no fan of either of them should miss hearing this record. The momentum and ebullience with which this music is imbued will forever remain in the memory of all discerning musicians and listeners alike.