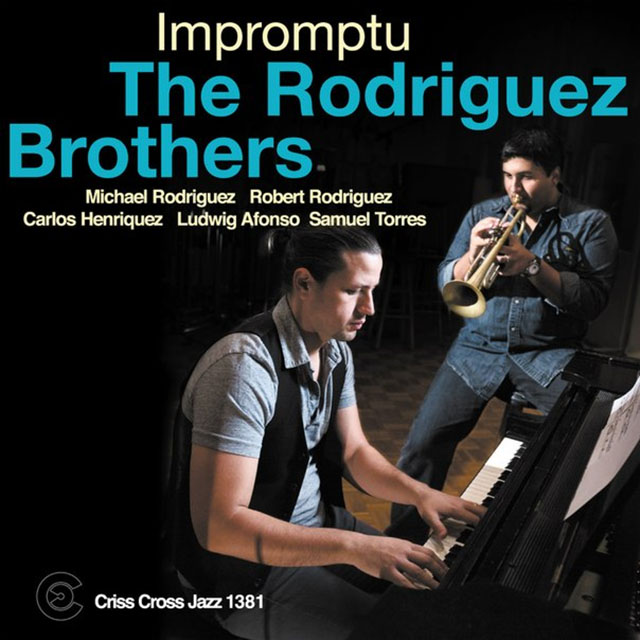 Few sets of brothers (as far as sisters go there is always the Labèque sisters) have such surprising material up their sleeves as The Rodriguez Brothers. Somehow, these siblings can be usually counted upon to devise intriguing soundscapes in whatever musical idiom they are tackling. This certainly holds true for their Impromptu album of music – eight songs for sextet that the brothers help tweak with invigorating, exciting and often feisty brilliance. Both trumpeter Michael Rodriguez and pianist Robert give sonorous and probing performances on their respective instruments. Bassist Carlos Henriquez, drummer Ludwig Afonso and percussionist Samuel Torres, with Roberto Rodriguez chipping in on “Minor Things” also do the same for the music.

The brothers’ inventiveness is in prime time throughout the album, which you as listener may or may not connect loosely if you wish. Each tune, even before it gets into the centre of its being, raise their poignant or jubilant heads with subtle changes of harmonic and thematic persuasion to let us know that new perspectives are in motion. There is also an unusual amount of intimacy, clarity and understanding that indicate the musicians are remarkably in touch with their instruments’ own physical characteristics. For this reason the instruments are played as if they have become extensions of the musicians themselves. After all when you posit such a close relationship with the instrument you not only play but love as well that is exactly what happens when you play.

Often enough the composers go to uncanny and delightful extremes rendering pulse and time of a particular song virtually unrecognisable until it magically emerges from the thicket of hazy sonorities. “Impromptu” dominates the album in a very special way; after a careening journey through richly harmonic tonal but absorbingly unpredictable landscapes, the following songs fall in as if in a trance under its dizzying fantasy. “Love Samba” and “Latin Jacks” dance with the brilliance of their young composers, rich with leaping pizzicato chords. Overall the repertoire are spectacularly crafted, completely unreserved, animated and characteristically witty.

Much of the success of this disc is surely due to the soloists. This is especially due to Carlos Henriquez’s stellar turn whenever he is called upon to step into the limelight. HIS work in particular, rests comfortably, between ensemble passages, between standard tonality, deftly rendering jazzy cadenzas that must surely be considered inspiration and impetus for all younger bassists who dream of playing their instrument in public. Mr. Henriquez’s warm sonority receives beautiful reproduction in one of the best-engineered discs in a long time.

Of course the best aspect of the album is its collection of eclectic songs, in true Rodriguez Brothers fashion, with jazz elements rubbing shoulders with Latin metaphors in spiky 21st century fashion and techniques. Despite being short on the number of songs, this is a smorgasbord of creative musings reverent and otherwise, as well as a lexicon of Latin-Jazz musical possibilities. With all limbs at full go-ahead at their musical command the Rodriguez Brothers and their brilliant cohort bring a spectrum of expressive and sonic shadings to their musical tour de force.