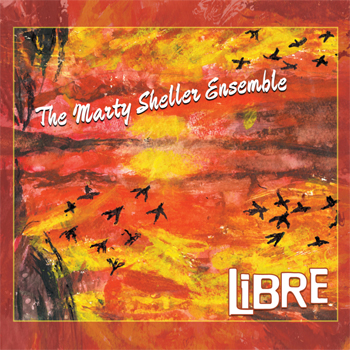 Thank heavens that Marty Sheller gives us his wonders in small packages – six songs and just over a quarter of an hour of music, this time on Libre. The brains contained within the limited volume would be hard-pressed to process larger chunks of music by The Marty Sheller Ensemble, which dazzles us with the star-power of Bobby Porcelli, Bob Franceschini, Joe Magnarelli and Chris Rogers, Sam Burtis, Oscar Hernandez, Ruben Rodriguez, Vince Cherico and the late, Steve Berrios as well. Throw in Bill O’Connell too and the explosion would have been atomic. This gathering of celestial beings also proves, again, that the whole is (surely) greater than the sum of the parts, which, just for good measure, are made to lock their musical gears into each other like those in a boiler room deep within the steamy engine room buried in the hull of the Titanic lost in the churning gyre of the Saragossa Sea.

Everytime one has the opportunity to deliver a valedictory address extolling his virtues as a writer of songs, a decorator of the rhythms of Latin Jazz, and a bringer-out of what’s mighty in other musicians’ hearts, but that would be quite another book. Besides, there is the music to speak of and sing of because nothing else of any real consequence does matter in terms of the here and now (and in the future as well. Of course, Marty Sheller does not do things with a view to securing his musical legacy; it’s just the way that happens as a consequence of whatever he does. In pleading guilty to the charge that the human head is somehow incapable of processing and appreciating larger volumes of music by The Marty Sheller Ensemble, which when tilted a 60° weighs in at a little over the quarter of the weight of a 200-lbs human body, so, nota bene, Marty: give us more.

Of course, that’s just what Sheller does. “Libre”, the song, that is, plays with our sensibilities, just as a one-time mentor, Art Blakey (showboating), would sometimes do. The melody is true to its title and liberates the listener, even as it proceeds to heat up the blood to boiling point, by now already coursing madly through the musicians’ and our veins. It’s what enables us to keep standing George Chuvalo-like through all fifteen rounds of Marty Sheller’s “Counter Punch”, even as we are assailed by boiling hot, swinging horns landing glancing and full frontal blows on our sensibilities as our arms hang hopelessly and loosely by our sides. And on and on it goes, round after round, while we – willing partners in this interminable dance in the ring – are tossed from Bobby Porcelli to Bob Franceschini and then from Chris Rogers to Joe Magnarelli.

Then hurled from Sam Burtis to Oscar Hernandez, and from the pianist to Steve Berrios and Ruben Rodriguez until Vince Cherico is given the honours of burying us with a depth bomb on the bass drum we – the listeners, that is – lie happily dazed and won’t wake up for the count. What a way to die, in the arms of one of The Marty Sheller Ensemble; wrapped in a dazzling white shroud by “Noraa” and “Woody 1”…”RSVP” en route to whatever the tag will say. With music as vivid as this the knockout doesn’t hurt at all; it’s as if we died and went to heaven…