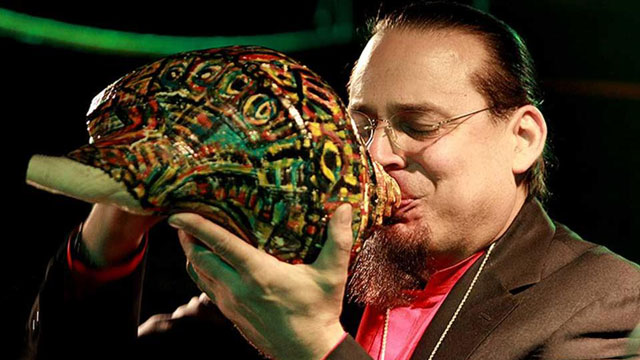 There are few recordings to wait for with greater anticipation than one by trombonist and seashellist Steve Turre. This extraordinary musician bestrides two disparate worlds: that of an ancient instrument: the seashell and a relatively modern one: that of the trombone. In the world of seashells he has no peer. Things are a little more complex in the world of trombones. At one end of the spectrum are trombonists such as the great Roswell Rudd, Albert Mangelsdorff, Frank Lacy and the up-and-coming Wycliffe Gordon, who have turned the trombone into an extension of the human voice and at the other are Bill Watrous and Steve Swell who have almost singlehandedly extended the range of that instrument. Again, Steve Turre straddles both of these worlds with human smears and great leaps from the lower to the upper registers of the instrument. That would have been all that you looked forward to from Steve Turre except that he has now also blossomed into a fine composer as well. It is for these reasons that Steve Turre must be recognised as a rather complete artist, made almost completely of music. For proof of this listeners need look no further than the present recording, Spiritman a deeply mesmeric album for here his playing shows off his strange and alluring genius. His inventions are redolent of light-handed glissandos and mercurial arpeggios, both played with quintessential charm and wit. 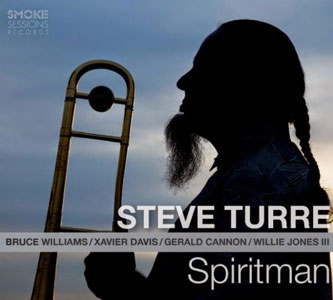 The disc consists of ten works of unsurpassed beauty. On slower numbers such as his own composition “Trayvon’s Blues” and on Horace Silver’s “Peace” he makes heaven-sent melodies sing out in an unforgettable way against their cascading figuration. On another one of his compositions, “Funky Thing” and then on the Gershwins’ classic “’S Wonderful” he is all mischief and twinkling brilliance in the augmented keys and on a piece such as “Bu,” you find him playing with a patrician poise. In essence the songs follow one after the other with poetic revelation. Alive with personal magic, his playing never makes you aware of the applied, self-conscious artifice of lesser trombonists, but only with happiness to share every imaginative possibility. His compositions could hardly be more graceful, fluent and affectionate. And his reworking of familiar standards is bursting with surprise. This comes in the form of unexpected tempi, such as in “Lover Man”. The wilder moments of “Nangadef” might be accurately described as absolutely transfixing. And what of “With a Song in My Heart” he is able to achieve his legendary love of freedom, something he shares with the most “out-there” musicians in Jazz for he breaks out of the conventional mould in a singular fashion.

Spiritman contains a repertoire that features songs that are the finest works in every genre—from ballads and eulogies to swinging songs bursting with vocalastic boperation. And every one of these songs adds newly fashioned musical language to musical literature. Every one—and I mean every single chart—that Steve Turre plays offers either a new benchmark of trombone playing or a version of a standard that ranks with the best. Much of this excellence would be virtually impossible were it not for a superb ensemble: saxophonist Bruce Williams, pianist Xavier Davis, bassist Gerald Cannon and the ineffable drummer Willie Jones III… even Chembo Corniel, who appears on one track. And if you want to introduce someone to Steve Turre the trombonist and seashellist, perhaps draw attention to the amount of work that he puts into his music, then this is one of the best discs to know him by. In addition his burnished trombone and heavenly shells are beautifully recorded live at Sear Sound. He draws the most sumptuous sounds from these instruments. This is, indeed an exceptional release.

About Steve Turre: One of the world’s preeminent jazz innovators, trombonist and seashellist Steve Turre, has consistently won both the Readers’ and Critics’ polls in JazzTimes, Downbeat, and Jazziz for Best Trombone and for Best Miscellaneous Instrumentalist (shells). Turre was born to Mexican-American parents and grew up in the San Francisco Bay area where he absorbed daily doses of mariachi, blues and jazz. While attending Sacramento State University, he joined the Escovedo Brothers salsa band, which began his career-long involvement with that genre. Read more…