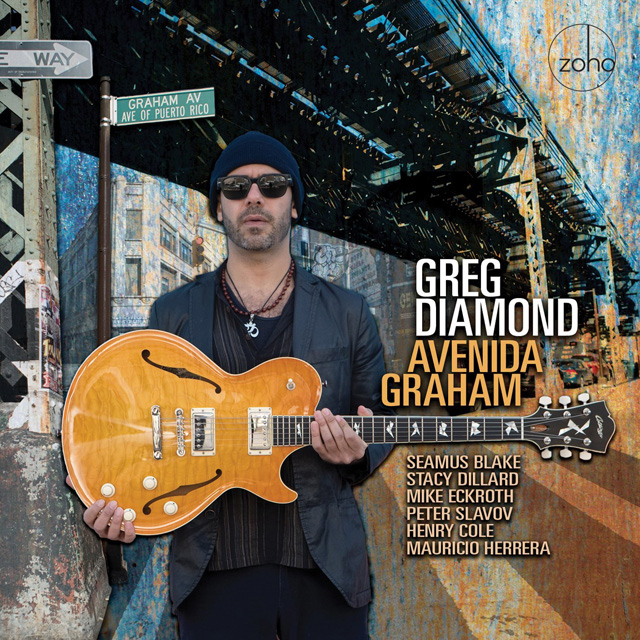 There has been a lot of musical buzz around Greg Diamond who even travelled as far as India, but none of it has involved getting into the studio with a band of his own; at least not until the one that produced this disc. What a pleasure then to encounter the full extent of his superb guitar playing and elegant musicianship on Avenida Graham. Diamond brings to music inborn talent, a rich history and much learned experience. All of this has resulted in many influences, but always one singular voice, both technically and musically.

One hears it in his fiery, beautifully paced ‘Synesthesia’ and in the rhythmically maddening ‘Gentrix’, so elemental in the angularity of someone who admires the genius of Thelonious Monk. ‘A Hint of Jasmin’ is a model of tenderness and poise. It also features the admirable musicianship of Stacy Dillard on tenor saxophone. ‘El Coronel’ prominently displays the inerrant rhythmic undergirding that lends Greg Diamond’s music a certain freshness and timelessness regardless of shifts in fashion among musicians caught up in the whirl of New York’s taste of the day. The lyrical, poignant longing of ‘Ultima Palabra’ is kaleidoscopic in its variety and attention to detail, and leaves you wondering exactly what it is that other guitarists miss about a ballad. The same sense of understated aptness is at the heart of ‘Motion Suite’, a passionate piece that develops what Diamond says began on ‘Inertia’ from his earlier album Conduit.

Greg Diamond’s music throughout this set shows him to be an accomplished composer and this, a rather admirable trait in any circumstance, is backed by greater musicianship – not mere virtuosity – with which to approach the guitar than many musicians on the instrument today. Combining the chromatic richness of ethereal fluidity of long, loping lines with short stabbing statements, as well as fabulous pizzicato playing with an aptitude of perfect-sounding notes and a bubbling imagination Diamond makes short work of even the most complex musical challenge. Add to that the fact that he draws on the richness of multiculturalism not only in New York, but in his very DNA and you have a rather compelling reason for his special music.

The recording is also wonderfully engineered and is a fascinating, often surprising set that rewards repeated listening.