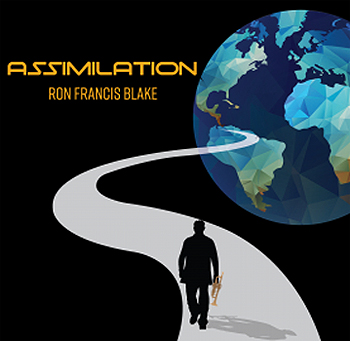 Ron Francis Blake has never strayed too far from actively playing music. The furthest he has ever gone is into an office space in his studio to contract a horn section for a musical project. Now the wanderlust has brought him back, but rather than simply signifying a return to performance, Blake has crafted Assimilation, seemingly a short album, but in reality a tour de force that pays homage to the music that has sustained him from the time he received his first horn. Blake’s career has taken him places, enabled him to play with a pantheon of musical deities and other acolytes. Some of them including Poncho Sanchez and Francisco Torres return the favour on this wonderful, albeit short record.

The arc of Blake’s illustrious career has taken him from the West Coast Cool to the heat and dust of Afro-Caribbean music and even here the trumpeter’s path has been anything but conventional. His volcanic lines have boiled over in the music of Aaliyah, Ziggy Marley and Poncho Sanchez, and a host of other stellar musicians. Assimilation is an appropriate title for this recording as it reflects the plethora of styles that imbue the music of Ron Francis Blake on this programme. Remarkably, however, Blake’s music is far from the cookie-cutter trumpeting that can often be heard from a musician who might play in so many situations, adapting to ‘fit in’ with every style in short order.

The music of Assimilation is born of craftsmanship of the highest order. Each song has, at its heart, a melodic line that is not simply affecting but one that enables rich harmonic progression all of which is built, of course, on a bedrock of solid rhythm. However, that’s just the framework. Wonderful stories ensue from each (song). As the narrator of each event, Ron Francis Blake brings his considerable sense of history to bear on each event, spicing things up with his quirky sense of humour – as sublimely evidenced on “Mr. Bond…” and “You and Me Bess”. Don’t be fooled by the fun and games, though. This music is also serious business and you will be forgiven if you find yourself lost also in the beautifully complex arrangements, especially on “Mr. Bond…” and “Night Dream”, which feature the well-oiled machinations of the brass ensemble that embellishes Blake’s playing with considerable success.

There are too many stars to mention again (individual credits are listed below). Suffice it to say that while their presence might give the impression that this is a super-constellation, the fact is that each of the heavyweights has eschewed individual grandstanding and put this wonderful music ahead of everything else. The same goes for Ron Francis Blake as a matter of fact, and he leads by example. Still one cannot escape the liquid fire of the trumpeter’s lines that seem to flare up and smoulder leaving crackling cinders flying out of the bell of his horn. The best place to find this is on “Saura de Nazareth” where Blake’s trumpet also dances evocatively with Andy Abad’s acoustic guitar. Clearly much thinking has gone into the making of Assimilation. The result is, predictably, fantastic.