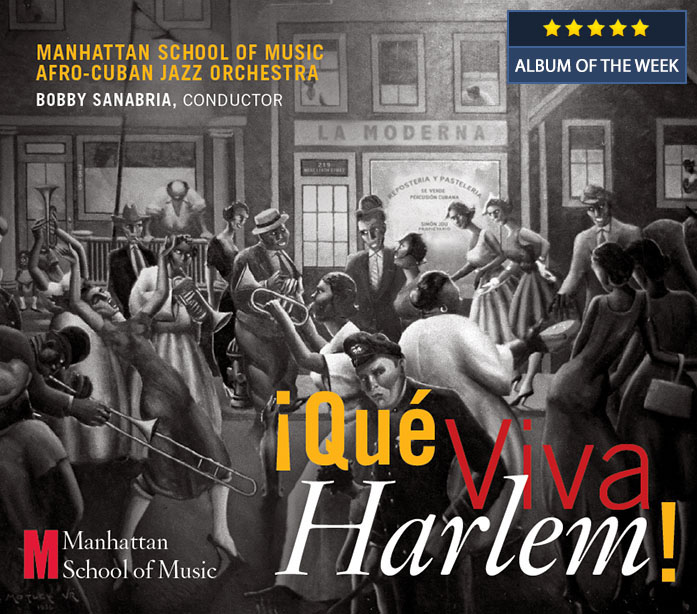 That the members of the Manhattan School of Music Afro-Cuban Jazz Orchestra has always been a group of jazz professionals masquerading is one of those truisms that seems to go unnoticed until they produce—under the directorship of the mighty percussionist, Bobby Sanabria—a monumental record. Indeed each of the three recordings in question have been true and unforgettable classics: The first is Kenya Revisited (Jazzheads, 2009) that revived the seminal 1957 tour of Kenya of Machito and his Afro-Cuban Big Band, featuring Mario Bauzá. This was followed by Tito Puente: Masterworks Live (Jazzheads, 2011) the celebrated tribute to El Rey and his contribution to Latin Jazz. To these celebrated recordings comes the mother of them all, ¡Qué Viva Harlem!, an epic album that celebrates the birth in East Harlem of the great iconic events that led to the making of Latin Jazz. First there was the Park Palace, then great entertainers who filled the 1,500 standing room only Ballroom. The greatest of these of course was the erstwhile Cuban, Machito and his Afro-Cuban Big Band, featuring the great Mario Bauzá who transformed not only Latin music, but the very heart of jazz as well. And then, of course, came El Rey, the great King of Latin Jazz, Ernesto “Tito” Puente.

Most of the players in the Manhattan School of Music Afro-Cuban Jazz Orchestra were not even born at the time this history was being made. But the young Bobby Sanabria was and he has, with the help of these fine musicians, brought this history to life. For this Mr. Sanabria deserves very special applause. As a percussionist Mr. Sanabria re-creates this wonderful music dipping into the repertoire of Duke Ellington, Billy Strayhorn, Machito, Mario Bauzá and Juan Tizol, masterminding its orchestration, which brings to life the very ghosts of those great bands. Mr. Sanabria has a rare gift for orchestrating these complex charts and more than that playing them in a lively and exciting manner. But it would seem, after his success three times now that his greatest gift is for forming this wonderful ensemble; gathering ever-so-talented musicians into one of the finest large ensembles playing in New York today. In its forming Mr. Sanabria is fast becoming a virtuoso and impresario of considerable standing. Granted he has produced just three great big band recordings with the Manhattan School of Music Afro-Cuban Jazz Orchestra, but there it seems his gift for writing and moulding these young musicians into an ensemble of exciting brimstone and fire in the best possible use of the term ought to draw parallels with the Duke Ellington and even Charles Mingus—certainly as big bands go Mr. Sanabria has only to build a considerable repertoire and he will rank with the pantheon that includes those two fine gentlemen.

The performances by trombonist Josh Holcomb on “Feeding the Chickens” followed by the ineffable trombonist Graeme Norris on “Oclupaco” are among the most breathtaking performances of this recording. Saxophonist Xavier Del Castillo is just as wonderful as is trumpeter Ryan DeWeese. And even if he goes unrecognised anywhere else as a vocalist, Bobby Sanabria sings in that primordial manner harking back to Africa and then integrating the primal energy into the Cuban and Caribbean elements of the music. Lastly Mr. Sanabria enjoins this lusty music to the idiom of jazz after which the sparks really begin to fly on this utterly memorable album that ought to be celebrated just as much as its predecessors were.