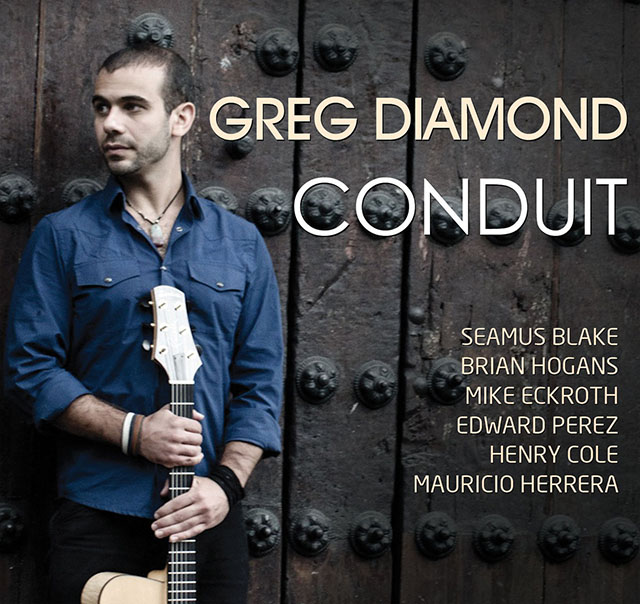 In his follow-up to Dançando Com Ale a classic 2009 debut Greg Diamond has produced another remarkable record, Conduit. The guitarist displays increasing maturity and thoughtful musicality on a flawless record that includes several of his cohort from the previous album: tenor saxophonist, Seamus Blake—himself a colossus in his own right, the alto saxophonist, Brian Hogans, who is fast emerging as a singular voice on that instrument and the bassist Edward Perez, who seemingly came out of nowhere to sparkle with his melodic play on Diamond’s and a slew of other brilliant recordings. The record also includes a few other ingenious musicians led by the amazing young Puerto-Rican poly-rhythmist and percussion colourist, Henry Cole, pianist Mike Eckroth, one-third of the enduring trio Bernal/Eckroth/Ennis, and the second percussion colourist, the astounding conguero, Mauricio Herrera.

With such a strong team Greg Diamond cannot but make a magnificent record. However it bears mention that the guitarist truly leads from the front. His playing is uniquely voiced and almost exceedingly stunning throughout. All significant players on that difficult-to-master instrument have voices of their own, but adding a burnished tonal aspect to instrument’s vocal sound is something only a master can impart; someone guitarists like Jim Hall, Joe Pass, and Pat Metheny, to name a few of the elite club outside of the whole tribe of Brazilians possess in abundance. Now that exclusive club of maestros must admit Diamond. The full-bodied tone and texture of Diamond’s playing takes on a liquid persona of such a pristine viscosity that his long and winding lines invoke the rhythmic bubbling of some mythical northern stream that rises in clear mountain air and rushes down the side of hill and dale to turn into a mighty river. For this is how Diamond builds his soli: starting in miniscule single-note rhythmic explorations of his melodic rivulets and then building up into mighty cascading waterfalls.

Typical of the superb music on the record is “Turbulence” which is roaring melody full of twists and turns that showcase the horn-like playing of the guitarist, who also plays his axe, at times, like a grand piano, mixing his gambolling organic improvisations with unusual block chords that stutter and stammer and snort with a wild kind of equine force. Mike Eckroth also keeps a liquid fire going behind the unfettered alto saxophone of Brian Hogans. The mighty percussion of Henry Cole and Mauricio Herrera build a kind of hallucinogenic engine going along with Edward Perez, who also builds a mighty harmonic sound scape before he emerges to take an electrifying solo shortly after Hogans’. On “La Poor Sweet” it is the turn of Seamus Blake to show why he has come to be recognized as one of the youngest grand-masters of the tenor saxophone with a solo that glides with mystical glissandos and astral arpeggios. Eckroth is once again the architect of a solo of such magnificent design the scope of which is bountiful in the energy of its bold lines and magnificently accentuated strokes.

Greg Diamond also shows, once again, that he is a composer of great maturity and genius. His melodies are sparkling and well-defined, yet they leave plenty of room for his stellar cast of musicians to express themselves. And no one disappoints here. Quite the contrary, all of the musicians in the ensemble play with extraordinary freedom and fire. The aching beauty of the ballad, “Song For Jerry (Mi Viejo)” is a fine example of the airy nature of Diamond’s compositions, which also shows how the guitarist makes spacy use of silence to offer his musicians to express themselves. If one more wish is to be granted, it would possibly be to have more definition in the miking for the percussion of Mauricio Herrera, so that his exquisite conga playing could be a tad brighter in the final mix. Otherwise this is another outstanding record from an outstanding guitarist, Greg Diamond.