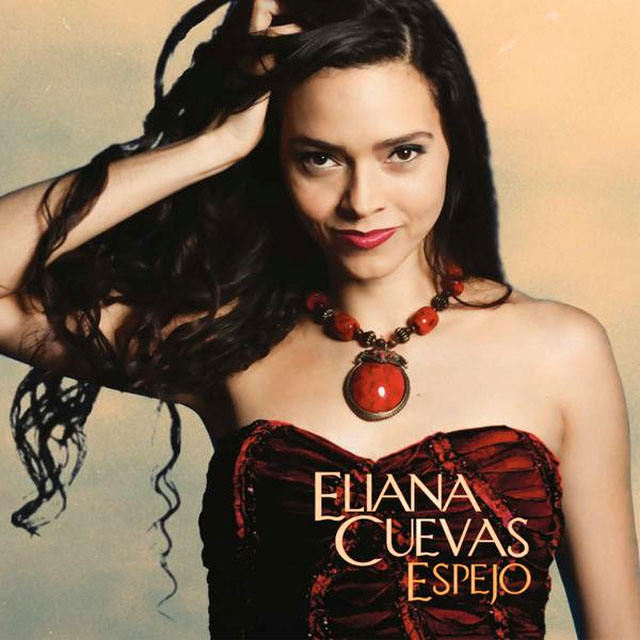 With her album Espejo the Venezuelan-born singer/songwriter Eliana Cuevas is somewhat deeper into her life as a musician. It is clear from the music on this album that Ms. Cuevas has matured considerably since her 2002 debut Cohesión. The singer is more self-assured, as she digs deeper into her soul and, as a result, it is clear that she now writes music that is more complex and makes fuller use of the folk music of Venezuela with greater intellect; in subtler ways both rhythmically as well as in terms of the rich and undulating melodic inventions that it is known for. Moreover Ms. Cuevas can be heard here to sing not so much within a zone that she is merely comfortable with, but as she pushes herself to capture the music with a greater sense of urgency and with a great deal more nervous energy. She is also in touch with the spirit realm where she appears to navigate with sublime femininity as well as with a certain shamanistic zeal.

Of course while pushing herself beyond such limits as she is seen to have done here Ms. Cuevas has had to make certain musical decisions that have made the album under review somewhat all-inclusive. Consider: Ms. Cuevas has pushed her skills to the limit. As a result she seems to have ended up fusing some elements of popular music into what would have been simply beautiful music that should have stood on its own, basking in its wonderful folkloric rhythms. “Estrellita” is one such song. It begins with an intricate melody interwoven into an equally complex rhythm, but then loses itself in what becomes a bit of pop over-kill, especially in the middle eight of the song when the changes become a bit simplistic. However, Ms. Cuevas quickly picks herself up and delivers a stellar performance in the elegiac “En Un Pedacito De Tu Corazón”. The song is exquisitely paced and Ms. Cuevas’ voice rises and falls in oceanic waves as she breathes an elemental sadness into the melody, which pirouettes in ever-widening circles around the hypnotic rhythm and the tantalising harmony of the keyboards.

The high point Ms. Cuevas’ vocalastics comes immediately thereafter in wave after wave of near-perfect music. Beginning with the ballad, “Nacerá” Ms. Cuevas shows herself to have a deep and almost umbilical connection to seemingly all South American music (the Brazilian foray here is palpable and divinely executed with touching affectation). Ms. Cuevas then continues her Latin odyssey with another superlative (melding of Venezuelan and Brazilian maracatú and marcha) performance in “Llegó”. All of the singer’s brilliance comes together in the breathtaking scatting of “El Tucusito”. It is in this song that the full impact of Ms. Cuevas’ vocal range as well as her true ingenuity shines through. The absolute brilliance of her control and expression as she races through the joropo is without compare. So wonderful is her performance that she almost surpasses the ingenuity of the melodic content of the song, which is owed to pianist Jeremy Ledbetter. Ms. Cuevas work is framed by an equally wonderful cuatro break by the matchless Aquiles Báez.

It is in the realm of music profoundly touched by her folk roots that Ms. Cuevas really outdoes herself. Her vocal gymnastics is not only on display with the speed and dexterity with which she executes the vocal (in the case of “El Tucusito,”) but also in the depth of her reading of the lyric (as in songs such as “Llegó” and “Nacerá”). Elsewhere Ms. Cuevas shows that she has the power to hold her own with the various textures and timbres of horns—both brass and the softer woodwinds—(on “Agua”), as well as when the arrangements call for strings (on “Lamento”). Despite its pop appeal, Espejo is a wonderful revelation of the artistry of Eliana Cuevas. It is indeed a wonderful reflection of her expressive musicality as well as the depth of her spirituality and soulfulness.