What comes across immediately and irresistibly in this new (2015) recording by Dion Parson and his 21st Century Band is the sheer physical pleasure of playing Afro-Caribbean music. Rhythms are lightly sprung, energy is propulsive, accents are unapologetic and the music dances. The leader, Dion Parson shares the studio and the stage with six other sublimely talented musicians. As a result, the music that 21st Century Band makes is akin to that of a lean, mean chamber orchestra. While the energy form all the musicians is palpable, it must be said that the visceral excitement comes from the three percussionists: Dion Parson, Alioune Faye, an astonishing sabar drummer, and of course the ubiquitous Victor Provost, who is fast becoming a star in his own right as her carries on the tradition of Othello Molineux. 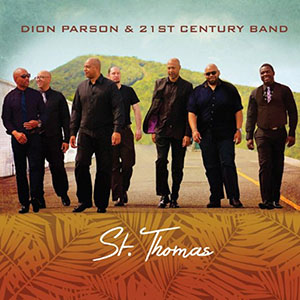 Dion Parson leads from the front. Few young drummers – his contemporaries and younger – feel as rhythmically sophisticated as Mr. Parson is. Few equal his imagination when it comes to his stick and brush work; few can make the skins sing as he seems to caress them and on “Ambergris Cay” even seemingly make love to them. But make no mistake, no matter how he treats his drumset, he makes it clear who is charge. His drumming has a tightness of organisation that is genuinely composerly. When the music is driven forward by the timpani motif that torches a swirling, tearing-it-up percussion cadenza midway (“Rockin’ in rhythm”) a moment echoed later with brass and winds, Mr. Parson’s characteristic rhythmic stride ignites the whole work. And so it is with the rest of the repertoire.

It isn’t hard to see why music that defines the disc sends the record rocketing to the top of any writer’s pile. The group is brimful with talent and it is not merely because of the percussionists. Carlton Holmes who plays with dramatic effect has done the same in Cindy Blackman-Santana’s band; Ruben Rogers is a brilliant acoustic and electric bassist has set the music charts of many an ensemble on fire; and you simply cannot emphasise enough the talent of Rashawn Ross, Ron Blake as well as Boo Reiners, who also contributes a chart to this recording. Together these men set this music alight too. They play up the music with a unique combination of whimsy and fervour. These are performances that make you fall in love with music all over again.

It also bears mention that recording engineers Rob Harari and Sean Kelly have captured remarkably true sound, serving it up to the mastering engineer, who did the recording justice by preserving the original, analogue sounding recording. For music and extra-musical reasons this record is a true keeper.

In 21st Century Band, Grammy® award-winning drummer and composer Dion Parson has put together a powerhouse ensemble. Comprised of seven of the world’s finest musicians, the band features a fresh innovative sound that boasts a superb mix of US Virgin Islands traditions such as Quelbe, and other Caribbean infusions like reggae, calypso, soca, mento, ska, zouk, steel pan, chutney, and funk with New Orleans and African overtones. Read more…