A most wondrous thing takes place when Clotilde Rullaud sings—wordlessly, sometimes… then using a given lyric. She seems not to beam her vocalastics through the electronics of a modern microphone, but rather through a gigantic prism that in turn rotates on an imaginary axis, controlled it would appear, by the power of her will.

Her sublime vocal gymnastics is refracted as if by magic into a myriad of aural colours. For Clotilde Rullaud is no mere “singer” she is a vocal sylph resembling the elemental of ether, whose quintessence resembles the white hot vapours of music vocalized with the passions and duende of the deepest recesses of the soul. Her words and phrases are carved in glorious ellipses traced in the shadows of French curves; they weave and arc, and swish with the unbridled spirit of the wind. She creates lines that leap like excited impalas intoxicated by the very texture and aroma of the earthiness of song. Ms. Rullaud does not utter or sing the words of a song. She murmurs and dallies like an almost invisible hummingbird, stopping atop a whorl of words intended to put a dramatic twist in the soul. Mystery is afoot when she entrances with numberless quartertones. Rhythm gives way to fibrillating pulsations, twisted then released like the explosion of a pressure cooker giving up its transcendent vapours to the denser air around it.

The fact that Clotilde Rullaud’s language is French has much to do with the beauty of these renditions. The language, so close to the Romance languages, employs phonetics that capture the essence of the emotions contained in the songs. This is true even with the songs that are rooted in spiritual and ritual practices from Africa, as in “African Sketches after Afro-Blue” and “O Canto de Ossanha/L’eau à la Bouche.” It might not be so much that the French belong to that diaspora that, uprooted in the African continent, eventually inhabited the world as far removed as America is from Brasil; but that they have unusual artistic antennae that enable them to inhabit that world of brilliant mystery that exists in the African-American and in the Afro-Brasilian cultures. The effortless facility with which Ms. Rullaud melds the mystical elements of African harmonies and polyrhythms with European polyphony speaks not only to her magical connection with Africa or the France of Serge Gainsbourg or Claude Nougaro and even Maurice Duruflé, but also to the possibility that African-American and African Brasilian proclivities in the arts might be inextricably linked with the emotive roots of the Romance languages such as the roots of French—meaning, of course, the Provençal . There is something so mesmerising and magical in Ms. Rullaud’s interpretation of Thelonious Monk’s “Ugly Beauty” that the listener can only gasp and wonder what if… And then there is the spectacularly written and performed “La Bahiana”…

Just as language is the hidden forte of this record, it actually threatens to come apart in “Fragile,” perhaps the weakest of all the music on the record. While her performance utilizing the languages of the Latin root, and while she is quite beyond competent in the English language, “Fragile” loses something in the pronunciation of certain words in the lyric, as well as in the expression. If only she had dallied awhile on the stresses and releases of a pictogram of that word as she does on the word “violins” earlier in the verse… In fact if only Ms. Rullaud had slowed down the pulse of the song to allow the lyric to shatter and splinter in a manner like that of the airy guitar that defines the opening of the song it might have turned out more haunting than even Sting’s original version, as opposed to approaching it from a rockier standpoint. As an example of her genius there is much to recommend this album—“Waltz for Debby/La Noyée”—for instance is just one of the songs performed at the highest order. “Oblivion/Deux Coeurs Perdus” and “The Walk After Pie Jesu From Maurice Duruflé” make up for the shortfall in “Fragile” making this one of the most brilliant and memorable that it could easily be one of the finest this year.

There is the other small matter of the incredible band that backs up Clotilde Rullaud. The magnificent work pianism of Olivier Hutman, who along with guitarist Dano Haider, have a deeply empathetic relationship with the vocalist as does drummer—percussion colorist, actually—Antoine Paganotti as well. Indeed, even trombonist, Sebastien Llado, in the few opening bars of “This is It” captures the same essential beauty that Ms. Rullaud does in her vocals that follow. And while Hugo Lippi has a singular voice on acoustic guitar, on the fabulous “La Bahiana” he certainly augments the magnificent work—with a few well-chosen chords and harmonics—of the other musicians on the rest of the record, which is truly an unforgettable work of art from every angle of the proverbial prism. 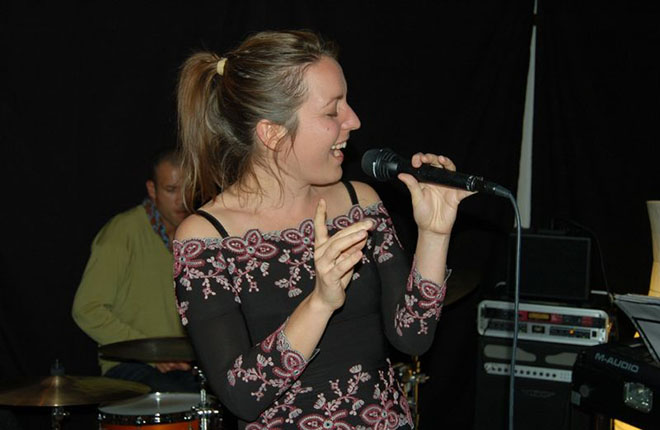 Featured photo of Antonio Adolfo by Paul Constantinides Antonio Carlos Jobim may be one of the most revered Brasilian musicians in...
Read
Featured Albums

“Social distancing” became the buzz-words of our world for more than a year and a half between 2020 and 2021....
Read
Concerts

When rumba - the pure Afro-Cuban music for voices and percussion - filtered down from the Matanzas to Habana, it...
Read