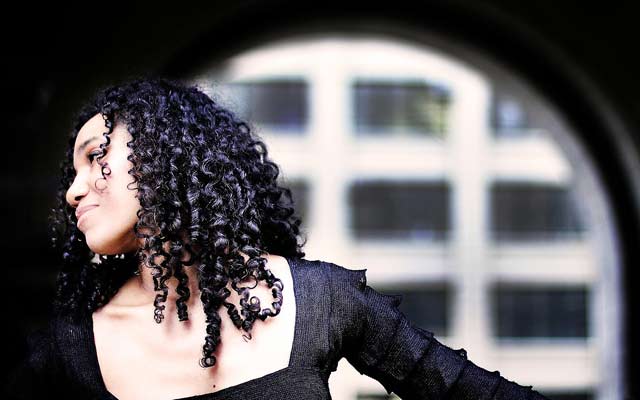 This is a slow burner of a disc. Honestly, I was not won at first hearing, Romero Lubambo notwithstanding. But listening is believing and by the time the first song heats up somewhere in the second chorus and when the smoky voice of Aimée Allen sets things on fire, I am led to believe that I never listened with undisturbed attention the first time around, because I find my breath taken away by Ms. Allen. The melodious disc opens with a ravishingly hushed performance of Ms. Allen’s “Matter of Time”. There are arguably more well-known tunes on the album, but somehow this track sticks in the mind. And this time around it is not just because Aimée Allen is accompanied by the distinguished Brasilian guitarist. 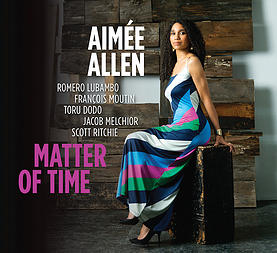 Aimée Allen soon settles down to an intimate and quite sultry performance, albeit at a slightly accelerated tempo, of Rodgers and Hart’s “My Romance”. The allure of this version is also the fact that there is just enough of a twist here to make the chart completely new. Ivan Lins’ chart with Marilyn Bergman’s lyrics is quite another matter. This is more of a straight ahead version of the song where intimacy is, once again, front and centre and this by singing to the accompaniment of the guitar alone. It is as if the lights were turned down low, and the air heavy with the smoke of cigarettes. While one may discern a certain salon-like atmosphere frequently, there are enough examples of tracks well contrasted and beautifully rendered.

“Close Your Eyes” and “New Day” are again subtly changed in the manner in which Ms. Allen alters the changes by singing in dramatic quarter tones. The results are imaginative and wholly satisfying. And the singer is on point even on less well-known pieces. This is because her thumbprint is there and recognisable even when the music is barely recognisable. The quality of her singing is affected by this as she takes her melodic energy and carries it into an improvisatory world very much of her own making. Sometimes Aimée Allen sings relatively straight, her voice tending more towards a sweet folk-like sound, but at other times expressive virtuoso extended techniques prevail.

Quite true to form, Romero Lubambo improvises with extraordinary lyrical beauty and bassist François Moutin contributes cool wisdom and gentility while pianist Toru Dodo and drummer Jacob Melchior use transformative skills to add atmospheric magic. This isn’t jazzed-up straight-ahead, but high-class improv that draws on a range of styles to create a fascinating range of sounds and textures that constantly develops within a certain emotional framework of restrained intensity. I for one, many mea culpas later, will surely be listening to this disc many more times.

Track List: Matter of Time; Soul Cargo; My Romance; The Island; Close Your Eyes; New Day; Sometimes I Just Know; Out of Nowhere; Qu’est-ce qu’on est bien ici; In the Name of Love; Corcovado; The Space Between; Matter of Time.

Born and raised in Pittsburgh, Pennsylvania, Aimée Allen’s intimate connection with music began as a child. Her childhood was literally scored with classic jazz, because her mother kept selections from the tradition on the family turntable. This influence can be heard in Aimée’s musical style and interpretation. But listeners can also hear Aimée’s individual voice, nuanced and sparkling with soul and sensuality. Though singing was a part of her childhood, Aimée first began singing professionally with jazz a cappella groups in college. After graduation, Aimée moved to Paris where she performed regularly in jazz clubs and festivals. The deep relationship between the francophone audiences and Brazilian bossa nova, led Aimée to form Les Bossa Novices, a Paris-based group dedicated to bossa and jazz. Read more…