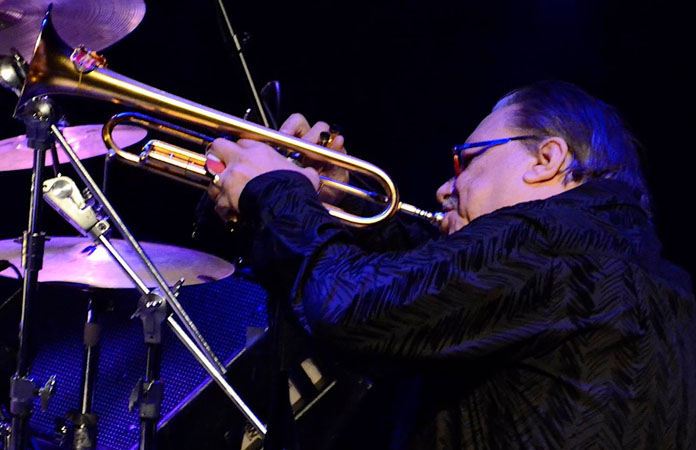 Spring had arrived but you wouldn’t know it by the temperature outside. Only the billboard with the promise, Feel the Heat of the Cuban Beat – Arturo Sandoval, made me leave the comfort of my car. I was ready for some hot trumpet playing from the ten time Grammy award winning Arturo Sandoval.

The opening number was a swinging jazz tune, played at a fast tempo, an upbeat tune giving the soloists lots of room to manoeuvre. Sandoval dug right in with a glorious tone, lightning fast runs and wonderful phrasing. His playing was on fire this night and he seemed to create the spark that set the other musicians to fire back with their own exemplary playing. The piano player Haymer took a wonderful solo in bebop tradition showing off his tremendous jazz chops. The saxophonist Tucker had a pleasing tone and style that complimented Sandoval’s playing. The rhythm section played as a tight unit that fed into the excitement. Tucker and Sandoval would dive into a spirited call and response that built to an exciting crescendo.

The second song performed went into ballad territory. With beautiful, soulful trumpet playing by Sandoval and ending with his vocal scatting/mumbling, reminiscent of something Clark Terry was famous for. But no doubt paying tribute to Sandoval’s mentor, Dizzy Gillespie who was the master of scatting.

The next song took the audience into a funky state of mind, think Tower of Power. The tenor sax of Tucker was smoking and the percussion and drums beat out a funky Latin frenzy. Everybody in the band was singing “Shake It Funky Baby”.   After that tune, Sandoval addressed the audience, he spoke of people always placing jazz in little square boxes and asking, “What you call that man”? Sandoval’s response, “Music Man”.

Sandoval shouts into the audience, “Hilario are you here”? Hilario Durán famed Toronto, by way of Cuba, pianist, composer, bandleader and educator, stood up and took a wave. Sandoval and Durán go way back to their days in Cuba. Durán was Sandoval’s pianist, arranger and musical director for many years. The last time I saw them play together, 2008 at the Toronto Jazz Festival, when Durán was invited on to the stage to perform with Sandoval’s group. The Hilario Durán Trio opened for Sandoval that evening and gave a most memorable performance.

Sandoval went on to explain that he has a love hate relationship with the trumpet. “Trumpet hurts the whole body. What I really wanted to be was a piano player. And with Hilario’s permission I’m going to play piano” he said. He then positioned himself behind the piano and the audience was treated to a trio performance, piano, bass and drums of a jazz standard that sounded to me like “Embraceable You”.

The band returned to back Sandoval up as he ventured into the audience, meeting and greeting, telling stories and jokes. It reminded me of a club scene, very intimate. He asked the sound technician to give him some reverb on the microphone and then proceeded to serenade the audience with his Salsa tinged rendition of “When I Fall in Love”.

Highlights for me included that romping opening number that set the tone for the evening. As well as the best maraca playing I’ve ever heard from the excellent percussionist Tiki Pasillas on the tune, “Suena”. Of course, the still mighty trumpet playing of the fantastic Arturo Sandoval, maybe not as many blistering high note solos as back in 2008, yet still a superstar performance by a fiery entertainer.

All photos of Arturo Sandoval by Atael Weissman

Previous articleRafael Zaldívar: Consecration
Next articleMachito & the Impact of the Afro-Cubans at 80

Brazil meets Cuba, a time for Markham and GTA residents to come in from the cold for what was promised...
Read
Concerts

A Class Act Another first for me, a Christmas holiday show to see a Canadian jazz chanteuse. A debut concert at...
Read
Festival Report

I almost didn’t log into Vimeo at 8 o’clock on Saturday night, March the 27th. It’s not that the programme...
Promotion