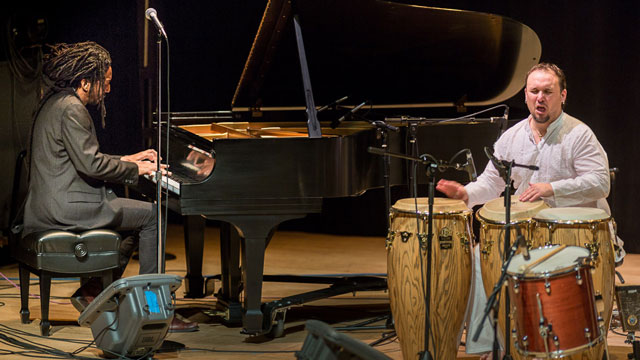 Multi-talented percussionist, composer Arturo Stable presented Dos Y Más and Cuban Crosshatching at the historic Leonard Nimoy Thalia, an intimate performance space located within the confines of Symphony Space on the upper West Side of Manhattan.

The first set featured Dos Y Más (Two and More), a collaborative effort between Arturo and pianist, composer Elio Villafranca, one of the most gifted and versatile pianists to emerge from Cuba in recent years. But before I describe the performance listeners should be made aware of Dos Y Más, the recording, which was released in January of 2012 and received excellent reviews but failed to receive the air play and recognition it deserved. Conceptually, the recording (and the performance) captures a moment in the lives of two Cuban maestros who are in the vanguard of jazz, Afro Cuban music and World Music and who are destined for greatness. Here, the duo demonstrates their appreciation and passion for the music of Cuba, Latin America, Spain and the Middle East. As one reviewer observed, “This is quite simply craftsmanship at its finest and it goes beyond the mere technique as craftsmanship may suggest.” Dos Y Más is also about friendship, similar backgrounds, a deep understanding of both languages (percussion and piano) and musical conversations that inspire creative expression.

Onstage, Arturo and Elio greeted the audience, spoke about their long-time friendship and revealed a best kept secret. Surprisingly, Elio began his musical journey as a percussionist and Arturo started out as a pianist. Wisely and for reasons only known to them, they switched. Afterwards, Elio manned a magnificent Steinway piano (he is a Steinway artist) while Arturo immersed himself in a sea of percussion – conga drums, batá drums, bongo drums, rattles, shakers, a Spanish cajón, an African finger piano and an eclectic drum set and … everything in between.

The set, which was short but sweet, began with the subtle yet haunting 1529, a tune created during the duos first rehearsal, followed by Saghezi, an Iranian rhythm traditionally played with a frame drum called a Daf. Arturo flips the script by incorporating several hand drums to dramatic effect. En La Colonia is inspired by the Yoruba prayers and chants that Arturo heard as a child and the upbeat A Las Milas recalls the legendary Cuban descargas, or jam sessions of the 1950s and its creators, Israel Cachao López, Gustavo Tamayo, Tata Güines and Frank Emilio Flynn. The atmosphere, the music and the receptive audience left the audience wanting more.

At the after party Elio mentioned the fact that he had an upcoming gig with Los Pleneros de la 21, a performing ensemble which preserves the Afro-Puerto Rican traditions of the Bomba and Plena. Elio can also be heard on Wilson Chembo Corniel’s exquisite new recording, Afro Blue Monk. Arturo serves as an endorser and clinician for Ritmo Percussion and he is the Chair of the Hand Percussion Department at the University of the Arts in Philadelphia, where he currently resides.

Seeing the duo up close and personal and spending quality time with the collective at the CD release party, along with Arturo’s lovely wife, Luz, saxophonist Seamus Blake, pianist Matt Yaple and vocalist Magos Herrera was a treat and a privilege.