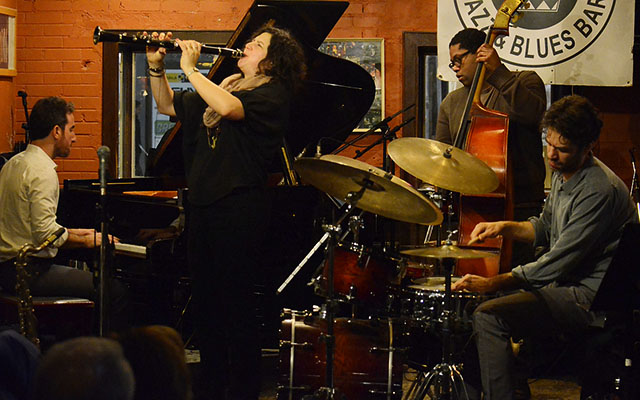 From NYC by way of Israel, the Anat Cohen Quartet, integrated by Anat Cohen on clarinet and saxophone, Aaron Goldberg on piano, Vicente Archer on bass and Daniel Freedman on drums, played at the Rex Jazz and Blues Bar in Toronto on March 18, 2015 as part of the second annual Israeli Jazz Showcase presented by the TD Toronto Jazz Festival and the Canada-Israel Cultural Foundation, showcasing her new CD “Luminosa,” with its Brazilian inspiration, and other music from her extensive discography.

Israeli-born clarinetist and saxophonist Anat Cohen was voted Clarinetist of the Year eight years in a row by the Jazz Journalists Association. She has topped the clarinet category in both the critics and readers polls in DownBeat magazine every year since 2011, and was DownBeat’s Rising Star Jazz Artist of the Year in 2010.

Anat Cohen grew up in Tel Aviv in a musical family and began playing clarinet at age 12. She attended the Tel Aviv School for the Arts, but her love for jazz began when she played clarinet in a Dixieland band at the Jaffa Music Conservatory. At 16, she joined the school’s big band and took up tenor saxophone. That year she also entered the Thelma Yellin High School for the Arts, where she majored in jazz. After graduation, she played tenor sax in the Israeli Air Force band.

A scholarship brought her to the Berklee College of Music in Boston in 1996. After graduating from Berklee in 1999, Anat Cohen moved to New York and spent the next decade touring with an all-woman big band, the Diva Jazz Orchestra. She also worked in Brazilian groups like the Choro Ensemble and Duduka Da Fonseca’s Samba Jazz Quintet, and performed the music of Louis Armstrong with David Ostwald’s Gully Low Jazz Band.

Her credits as a band leader include serving as music director of the Newport Jazz Festival Now 60! all-star band, which toured the country for the festival’s 60th anniversary in 2014.

More about Anat Cohen on: anatcohen.com
Photos by: Atael Weissman

As part of the Special Music of The Americas Concert Series, the great flamenco singer Diego "El Cigala" made his...
Read
Photo Galleries